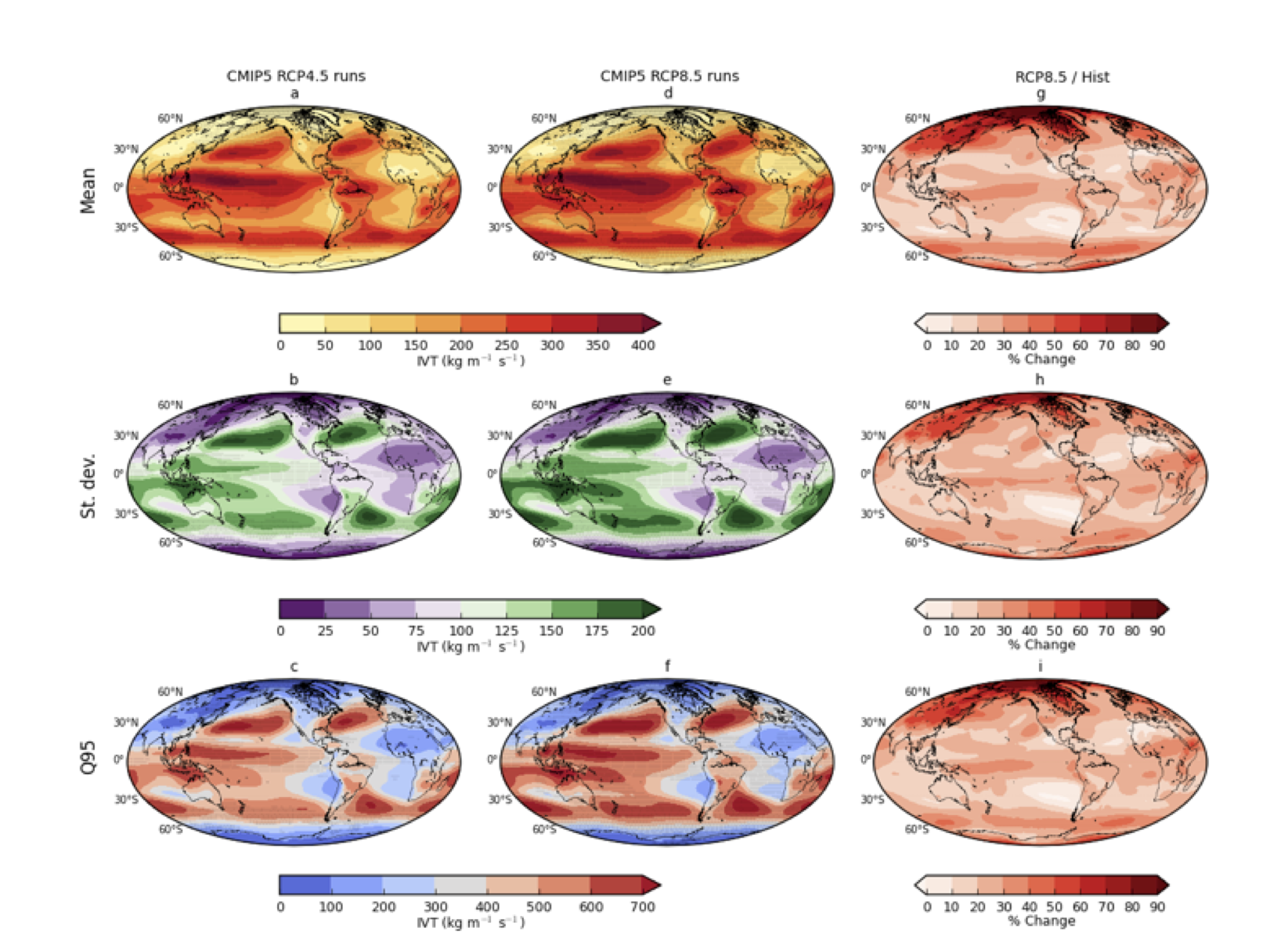 Projected multimodel mean changes in the mean, standard deviation, and 95th percentile of winter water vapor transport (over 2073-2099) in the RCP4.5 and RCP8.5 scenarios. The multimodel mean percentage changes are shown in the right column. From Lavers et al. (2015).

Research over the last decade has shown that the majority of heavy precipitation and flood events on the western edges of mid-latitude land masses are connected to intense water vapor transport. This vapor transport is found within the atmospheric river region of extratropical cyclones. As climate change is expected to create a warmer atmosphere capable of supporting more water vapor, it is also thought that the global water cycle will intensify leading to more vapor flux and hydrological extremes, such as floods and droughts. Any changes to the water vapor transport by the atmosphere are likely to have hydrological ramifications of great significance to hydrometeorological applications.

The research presented in Lavers et al. (2015) investigates the historical and projected changes to water vapor transport in the latest Climate Model Intercomparison Project Phase 5 archive. Using output from 22 models, robust increases in vapor flux by the end of the 21st Century are found, which suggests the likelihood for larger precipitation and floods in the future. This research was a collaborative effort led by CW3E, with the aim of ascertaining the projected global water cycle changes that may need to be considered in the future.

Global warming of the Earth’s atmosphere is hypothesized to lead to an intensification of the global water cycle. To determine associated hydrological changes, most previous research has used precipitation. This study, however, investigates projected changes to global atmospheric water vapor transport (integrated vapor transport (IVT)), the key link between water source and sink regions. Using 22 global circulation models from the Climate Model Intercomparison Project Phase 5, we evaluate, globally, the mean, standard deviation, and the 95th percentiles of IVT from the historical simulations (1979–2005) and two emissions scenarios (2073–2099). Considering the more extreme emissions, multimodel mean IVT increases by 30–40% in the North Pacific and North Atlantic storm tracks and in the equatorial Pacific Ocean trade winds. An acceleration of the high-latitude IVT is also shown. Analysis of low-altitude moisture and winds suggests that these changes are mainly due to higher atmospheric water vapor content.