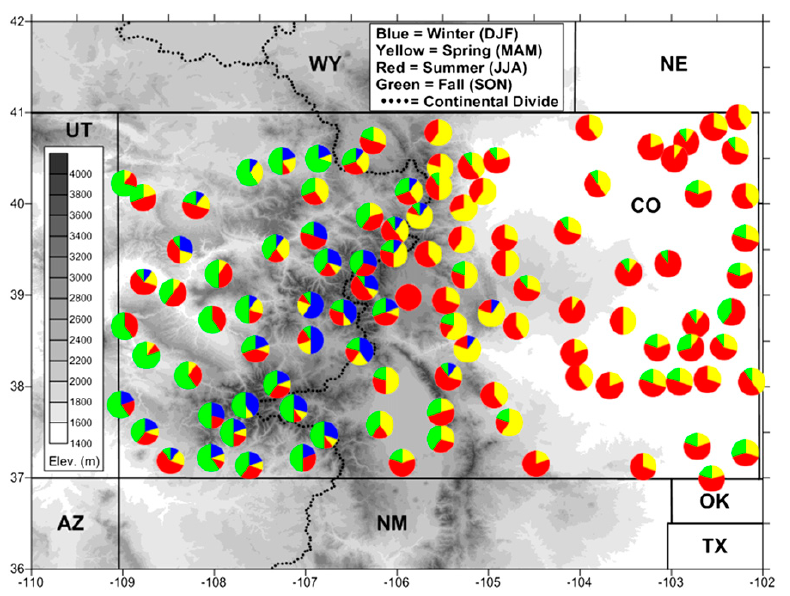 The origins of extreme precipitation events in the Western U.S. range from landfalling atmospheric rivers, to the summer monsoon, upslope storms on the Rocky Mountain Front Range, and deep convection of the Great Plains variety. This was shown by an analysis across the west of the seasonality of the top 10 wettest days for each of thousands of COOP observer sites (Ralph et al. 2014**). Each of these sites had at least ~10,000 data points, so these top 10 days represent roughly the top 0.1% of days. Some areas were universally dominated by events in one season, or two. A couple of areas stood out in the diversity of their seasonality of extreme daily precipitation, including Colorado.

The study presented in Mahoney et al. 2015* explores this local variability more deeply, explores how the devastating flood of September 2013 in Colorado’s northern Front Range is related, and describes some of the implications of the findings for flood control and other sensitive sectors. The co-authors represent a diverse group themselves, including climate, weather, hydrology, hydrometeorology expertise from several organizations, (CIRES, NOAA/PSD, Scripps/CW3E and CSU). The paper is highlighted here as it represents an example of work on extreme events in the Western U.S. that the Center for Western Weather and Water Extremes is contributing to.

Abstract of Mahoney et al. 2015*: The climatology of Colorado’s historical extreme precipitation events shows a remarkable degree of seasonal and regional variability. Analysis of the largest historical daily-precipitation totals at COOP stations across Colorado by season indicates that the largest recorded daily precipitation totals have ranged from less than 60 mm/day in some areas to greater than 250 mm/day in others. East of the Continental Divide winter events are rarely among the top 10 events at a given site, but spring events dominate in and near the foothills; summer events are most common across the lower-elevation eastern plains, while fall events are most typical for the lower elevations west of the Divide. The seasonal signal in Colorado’s central mountains is complex; high-elevation intense precipitation events have occurred in all months of the year, including summer when precipitation is more likely to be liquid (as opposed to snow) which poses more of an instantaneous flood risk.