A climatology of atmospheric rivers in New Zealand

Hamish Prince, an intern at CW3E, recently published a paper (Prince et al., 2021) in the Journal of Climate along with co-authors including CW3E Researcher Peter Gibson and co-authors from New Zealand at the University of Otago (Nicolas Cullen and Daniel Kingston) and the National Institute for Water and Atmosphere (Jono Conway). This study contributes to the goals of CW3E’s 2019-2024 Strategic Plan to support Atmospheric River (AR) Research and Applications by furthering our understanding of AR dynamics. The research presented in this paper was completed as part of Hamish’s Master of Science degree at the University of Otago, New Zealand, School of Geography.

Similar to the Western United States, New Zealand has been recognized as a ‘hotspot’ region for elevated AR occurrence. Despite this recognition, there has been a distinct lack of regionally focused AR research in New Zealand. Quantifying the large-scale dynamics controlling AR occurrence in various regions across the globe enhances our understanding of ARs, highlighting regional differences and expanding our perspective of AR dynamics. In this study, an AR tracking tool and an AR ranking scheme, both previously developed for the Western United States, were applied to New Zealand to study AR seasonality and probe potential AR impacts in the region. This study uses the Guan and Waliser (2015) AR tracking tool to develop a 40-year database of ARs in the New Zealand region between 1979 and 2019. This study also proposes a novel method to combine the AR tracking tool with CW3E’s Ralph et al. (2019) AR ranking technique.

A strong seasonal cycle of ARs was found for New Zealand, with peak AR occurrence in summer months (DJF) associated with both increased AR frequency and AR rank (Figure 1). The large-scale controls on AR occurrence in New Zealand were also identified, with modulations in the Southern Hemisphere jet stream, cyclone tracks and seasonal moisture variability driving the observed seasonal cycle in ARs. This research then used station-based precipitation records to validate the use of the AR ranking scheme. The proportion of precipitation (total and extreme) during an AR is identified at each study site and the relationship between AR rank and 3-day precipitation is explored. At certain locations, on the windward side of the alpine region, ARs account for up to 78% of total precipitation and 93% of extreme (98th percentile) 6-hourly precipitation. The AR ranking scheme illustrates increases in precipitation at all locations observed, with the greatest increases observed on the windward side of the alps (Figure 2). The greatest AR5 precipitation amounts exceed 1000 mm within 3 days, which are some of the largest AR precipitation volumes recorded anywhere on Earth.

Using research tools previously developed for studying ARs in the Western United States, the Prince et al. (2021) study identifies New Zealand as a key region of AR occurrence with significant hydrometeorological impacts. The linkages made in this study facilitate further study of the environmental and social impact of ARs in New Zealand and provide an important benchmark for assessing how extreme precipitation in New Zealand may change in a warming world. 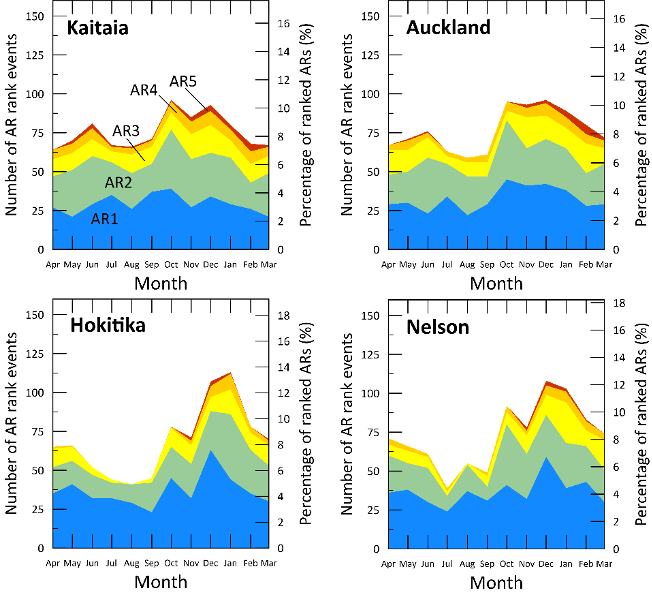 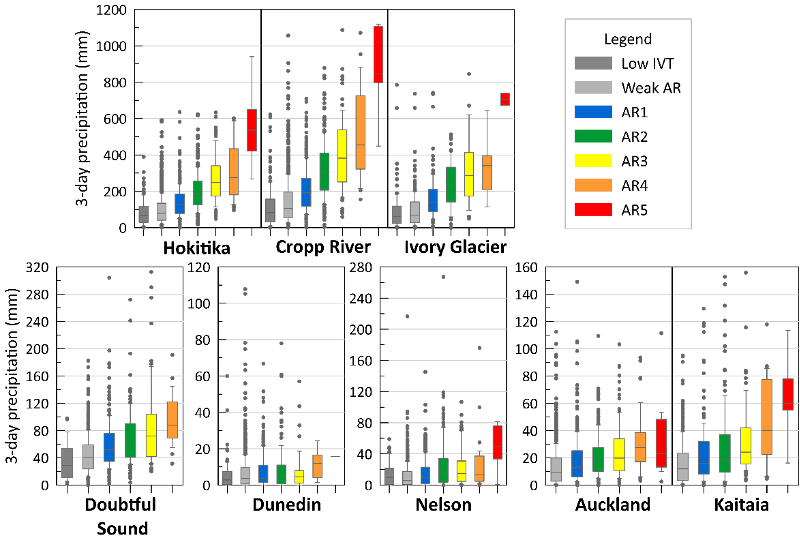 Figure 2: Distribution of 3-day precipitation totals associated with ARs of different rank following initiation of an AR at each study location. The locations on the West Coast of New Zealand, on the windward side of the alps (Hokitika, Cropp River and Ivory Glacier) show the greatest increase in precipitation with AR rank. (Figure 11 from Prince et al., 2021).