The researchers examined daily activity of atmospheric rivers (ARs) targeting the Northern California coast over six decades using observations of synoptic-scale circulation, high-resolution precipitation, and a long-term AR detection catalog. Using self-organizing maps (Figure 1), they classified ARs making landfall in Northern California in the vicinity of the Russian River watershed based on atmospheric circulation, and then examined the role of large-scale climate modes in determining different characteristics of ARs. They demonstrate how dramatically different atmospheric states evolve into landfalling ARs along distinct pathways that are modulated by interannual (El Niño/Southern Oscillation and the Pacific Decadal Oscillation) and subseasonal (Arctic Oscillation, Pacific North American Pattern, West Pacific Oscillation, and the Eastern Pacific Oscillation) modes of large-scale climate variability. Different configurations of climate variability modes are shown to favor ARs having different characteristics in terms of synoptic evolution, integrated vapor transport and landfall orientation, resulting in different patterns of precipitation over the landscape. In particular, the results show that while ENSO plays an important role in modulating the synoptic evolution of ARs and their orientation at landfall, subseasonal regional climate modes, which also influence landfall orientation as well as the position of the storm track, appear to be more influential than ENSO in modulating precipitation variability in California (Figure 2). This could have implications for subseasonal to seasonal (S2S) forecasting. The researchers also examined AR activity over the most recent and highly anomalous winter 2016-17 and showed how the unprecedented wet conditions in Northern California were at least partly due to the persistence of ARs characterized by a southward storm track and southerly orientation, which represent the type of ARs associated with heavy rainfall in California, and which are associated with the negative phase of subseasonal regional teleconnection patterns. 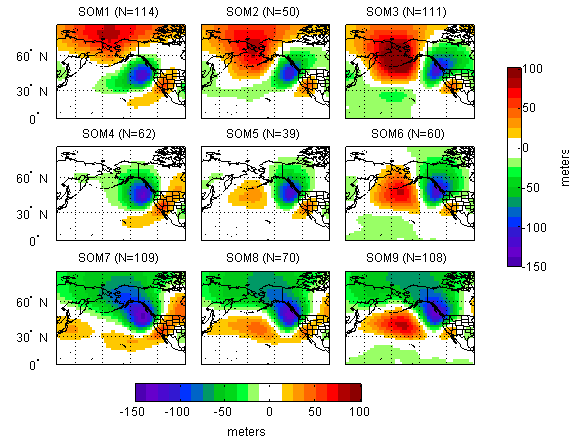 Figure 1: Self-Organizing Maps trained on 500 mb geopotential height anomalies for peak AR days at 40°N along with the number of days (N) assigned to each node. The nine SOM patterns represent different types of ARs classified by their synoptic circulation. Circulation differences seen in the top versus bottom rows are due to the phase of regional climate modes (Arctic Oscillation, Eastern Pacific Oscillations, Western Pacific Oscillation). Circulation differences seen in the left versus the right columns are due to the phase of ENSO/PDO, where Types 1, 4, and 7 occur during El Niño/PDO+ and Types 3, 6, and 9 occur during La Niño/PDO-. 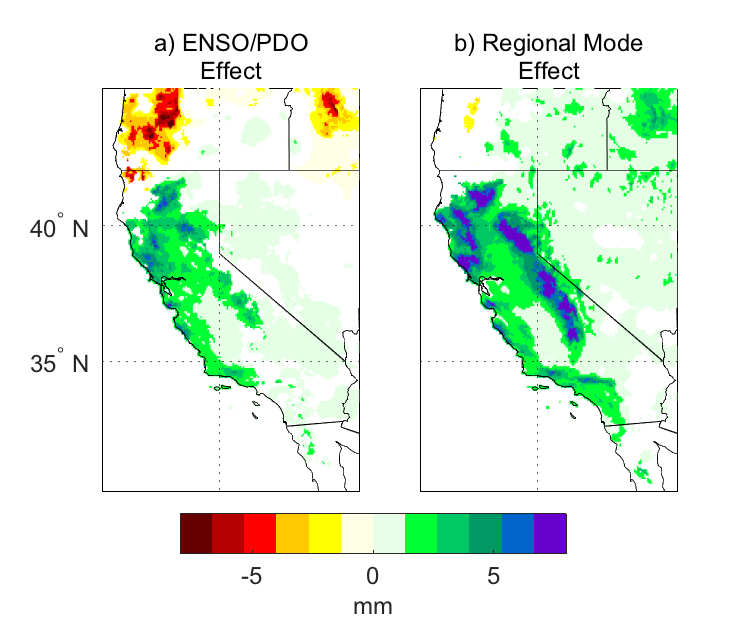