The paper explores the use of new drought indicators which include precipitation, air temperature, soil water content, climatic water deficit and recharge/runoff. Climatic water deficit (CWD) is the potential evapotranspiration minus the actual and can be thought of the missing water from the landscape. To test these drought indicators during the 2012-2016 drought, the study uses the Basin Characterization Model (BCM), a hydrology model that has been well calibrated in the Russian River. In the Russian River, after the 2012-2016 drought, the extreme conditions over five long years had depleted soil storage and the shallow unsaturated zone to such an extent that water supply, calculated as recharge + runoff was still behind normal by 1 to 3 years by the end of water year 2016. CWD ranged from 0 in the deep river valley to 1–2 years behind normal in the higher elevations (Figure 4). 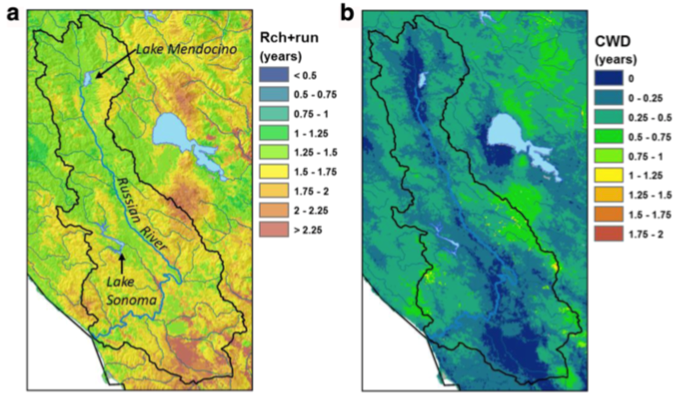 The paper then explores two extreme drought scenarios, one acute scenario and one extended drought. Based on Russian River watershed stakeholder’s feedback during the 2014 and 2015, they wanted to understand impacts of a drought scenario that was worse than the then on-going drought. Incorporating this feedback, the extreme drought scenarios added the historical droughts of 1976-1977 and of the 1930s to 2011-2015 record to represent an acute and extended drought respectively. These scenarios were run through the BCM and also through Sonoma County Water Agency reservoir model tool, Res-Sim. The results of the two droughts were very different (Figure 7). For the more acute 1976/1977 drought, Lake Mendocino was dry for much of 1977, but precipitation in 1978 was enough to recover the system as shown the run-off/recharge being above the historical normal. However, the low water supply years of the 30s never drained Lake Mendocino, but by the extended warm, relatively low precipitation years that dried out the landscape resulted in the reservoir not recovering until the late 30s with a couple of above normal water supply years coinciding with lower CWD. 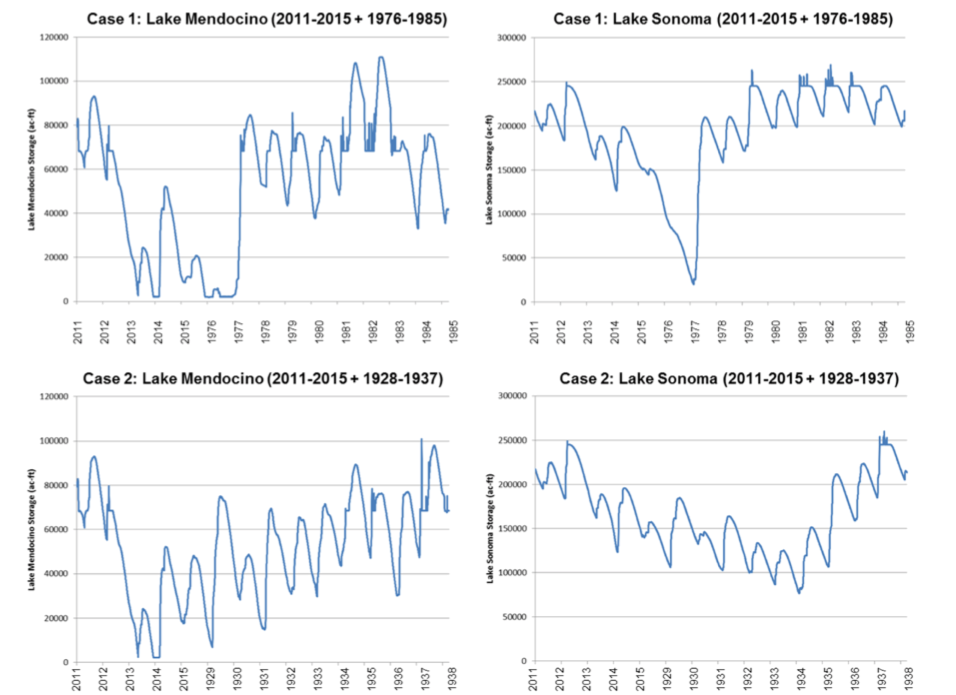 The paper concludes by highlighting the benefit of two drought indicators, one that reflects the direct natural water supply (run-off/recharge) and one that represents landscapes. As stated in the conclusion “Both indices combine to provide local and regional managers a sense of how serious an ongoing drought is and the likelihood of rapid recovery.”

The research for the paper was supported by NOAA Sectorial Application Program project, “Coping with Drought in the Russian River Watershed”, and Sonoma County Water Agency.