Jorge Eiras-Barca, along with co-authors Alexandre M. Ramos, Iago Algarra, Marta V´azquez, Francina Dominguez, Gonzalo Miguez-Macho, Raquel Nieto, Luis Gimeno, Juan Taboada, and CW3E Director F. Martin Ralph published a paper in Weather and Climate Extremes assessing the application of the AR Scale (Ralph et al. 2019) to Western Europe. This study contributes to the goals of CW3E’s 2019-2024 Strategic Plan to support Atmospheric River (AR) Research and Applications by exploring the applicability of the AR Scale, which was developed based on ARs impacting the US West Coast, to ARs striking the European West Coast. This also serves to expand the geographical reach of research and applications that were developed by CW3E initially for the western U.S. to other parts of the world – another direction recommended by CW3E stakeholders during the development of the 2019-2024 Strategic Plan.

This study first examined the climatology of IVT in western Europe and found somewhat stronger IVT values on average in western European ARs. The most common maximum values were about 100 kg m-1 s-1 greater in Western Europe. However, the ARs of extreme or exceptional intensity, i.e., those having maximum IVT > 1000 kg m-1 s-1, occurred with similar frequency in both regions (Fig. 1). Although the most frequent values of max IVT in landfalling ARs in western Europe were somewhat higher than the US West Coast, the IVT thresholds used by the AR Scale were retained, but the characterization of likely impacts was adjusted. The AR1 and AR5 characterizations remain the same for the European ARs, i.e., primarily beneficial and primarily hazardous. The AR 2, 3 and 4 characterizations were modified (Table 1) to adjust for the shift in the frequency distribution of AR maximum IVT and associated extreme precipitation.

Abstract: This manuscript applies the recently-created atmospheric river intensity and impacts scale (AR Scale) to the European continent. The AR Scale uses an Eulerian perspective based solely upon the time series of integrated vapor transport (IVT) over a given geographic location (often represented by a model or reanalysis “grid cell”). The scale assigns events with persistent, strong IVT at that location to one of five levels (AR1 to AR5), or if the IVT is too weak or short-lived it is determined not to be an AR. AR1 events are primarily beneficial, AR2, 3 and 4 include a mix of beneficial and hazardous impacts, while AR5s are primarily hazardous. The frequency of occurrence, the associated probability of anomalous precipitation and the amount of precipitation explained by each AR rank are provided across Europe for the extended winter season (from October through March). AR1 and AR2 events are the most frequent and explain most of the observed precipitation, but they are associated with a low probability of extreme rainfall. Although AR3, AR4 and AR5 events are much less frequent, and normally provide a smaller fraction of annual precipitation, they are associated with a high probability of extreme rainfall. These results show remarkable variability among the different regions of the European continent. This manuscript also provides an AR detection catalog over Europe for the period 1980–2019, and a simplified version of the algorithm used to rank the events from AR1 to AR5. 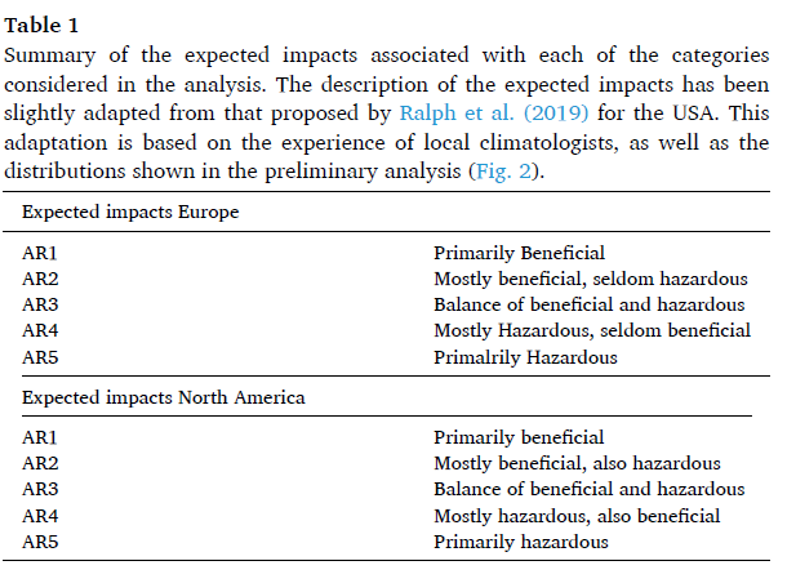