A group of CW3E researchers, led by Forest Cannon, used an in-depth case study of a narrow cold frontal rainband (NCFR) to assess the predictability of various aspects of these features and explore potential early warning signals that an NCFR is likely to develop.

NCFRs are narrow bands of high-intensity rainfall that are parallel to and occur in the vicinity of the cold front in a storm. They are typically only a few kilometers wide and extend tens to 100s of km in length, and are broken into “gap and core” structures of light rainfall (gaps) and intense rainfall (cores; Fig 1a). NCFRs are also characterized by their relatively shallow convection (<3-5 km deep), driven by strong low-level convergence along the front. 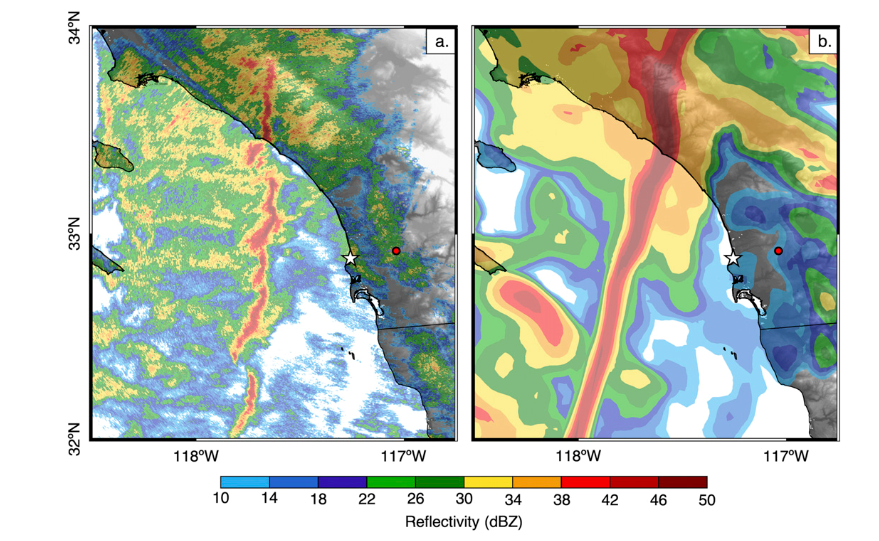 This work was motivated by the fact that NCFRs have been associated with numerous extreme precipitation and flash flooding or debris flow events in California. Recent observational and theoretical studies have described NCFRs. In this work, we wanted to take the next step forward and gain insight to representation of NCFRs in the weather models that are used to forecast them. Here, we use WRF as well as novel observations from an Atmospheric River Reconnaissance mission and CW3E field campaign to evaluate model performance in representing an NCFR that impacted southern California on 2 February 2019.

We found that rapid cyclogenesis (rapidly falling sea level pressure (SLP)) was an indicator that NCFR development was likely in this event. Individual GEFS ensemble members captured the SLP drop five days in advance of NCFR landfall, and the observed SLP drop was within the ensemble spread three days in advance of NCFR landfall. This provides an indication of a potential source of situational awareness at long-lead times (3-5 days) for these features.

Figure 2. : Dropsondes in the cold sector behind the front (blue line) and in the warm sector ahead of the front (red line) and the corresponding West-WRF-Exp ensemble member (small open circles) and mean (large filled circle) profiles for (a) temperature, (b) water vapor mixing ratio, (c) wind speed, (d) vapor flux, and (e) wind direction, plotted on model levels.

In the WRF simulation, which is used to resolve finer details of the event at shorter lead times, all 21 ensemble members produced an NCFR, though there were variations in the structure, timing, intensity, and orientation. This indicates that the development of this NCFR in West-WRF was insensitive to model physics or sub-grid-scale errors. We compared the dropsonde observations to the model output—ahead of (in warm sector) and behind (in cold sector) of the cold front. For the variables examined (temperature, mixing ratio, wind speed and direction, and vapor flux) the ensemble mean gave a reasonable approximation of the dropsonde observations, indicating WRF accurately captures some of the key physical processes that drive NCFR evolution (Fig. 2).

The results are encouraging for the use of mesoscale model forecasts for NCFRs at multi-day lead times, though the issues remain of timing, location, and intensity errors. As next steps, we will extend this work to a larger event sample size as well as assess performance of operational forecast models for NCFRs.

This work addresses several priority areas in the CW3E 2019-2024 strategic plan. Atmospheric River Research and Applications: NCFRs often occur in conjunction with ARs. Intense convection in an NCFR likely influences characteristics and predictability of AR-related precipitation, thus improving model performance with respect to NCFRs will support the advancement of AR science. Modeling Capabilities in the Western US: This research assesses model performance and gives indications of potential for model improvement with respect to extreme precipitation. Forecast Informed Reservoir Operations: NCFRs produce short-duration, high-intensity precipitation. Reservoirs operations that are sensitive to “flashy” runoff will benefit from improved understanding and forecasting of NCFRs.