CW3E recent PhD graduate Maryam Lamjiri, along with co-authors CW3E Director F. Martin Ralph and longtime CW3E collaborator Mike Dettinger (newly minted CW3E “visiting researcher”), published a paper in the Journal of Hydrometeorology titled “Recent Changes in United States Extreme 3-Day Precipitation Using the R-CAT Scale” (Lamjiri et al. 2020). This work is a part of CW3E’s ongoing effort to understand and improve the predictions of extreme precipitation and support emergency preparedness and resource management in the western United States. This effort includes monitoring and projections of climate variability and change, and the new study in particular strives to provide new insights from weather and climate observations to understand changes in the most extreme events, changes that may already be happening in the US.

Extraordinary precipitation events have impacted the United States (U.S.) in the past several years, with 3-day precipitation totals larger than any others reported in the U.S. during the past 70 years. The R-CAT scaling method is used to document extreme precipitation events and test for trends nationally. The R-CAT scale uses thresholds of 3-day precipitation totals in 100 mm increments (starting with 200 mm) that do not vary temporally or geographically, allowing for simple, intuitive, comparisons of extremes over space and time. The paper that introduced the scale (Ralph and Dettinger 2012) only required levels 1-4 to represent historical extremes, finding that R-CATs 3-4 strike the conterminous U.S. about as frequently as EF 4-5 tornadoes or Category 3-5 hurricanes. Remarkably, two recent hurricanes, Florence (2018) and Harvey (2017), require extending the scale to R-CAT 7 and 9, respectively (Table 1), and the largest 3-day total (Tropical Storm Imelda) in 2019 ranked as an R-CAT 6. This recent unprecedentedly unbroken string of new R-CAT levels prompted a new look at the scale, resulting in the new paper. The most extreme R-CAT event recorded on the west coast since 1950 reached level 5.

Trend analyses of annual maximum 3-day totals (1950-2019) identify significant increases in eastern U.S., along with overall declines in northern California and Oregon. Consistent with these results, R-CAT storms have been more frequent in the eastern and less frequent in the western U.S. during the past decade compared to 1950-2008. Tropical storms dominate R-CAT events along the southeast and east coasts with surprising contributions from atmospheric rivers (in up to 48% of the R-CAT-level events). Much less surprisingly, ARs completely dominate (more than 90%) along the west coast (Fig. 1). The new study, which is based solely on observations, could not demonstrate a statistically-significant shift in the distribution of R-CAT level storms in the past decade. However, a single decade is too small a sample to demonstrate irreversible changes. Nonetheless, the severity of the most recent storms may still turn out to be the first indication that ultra-extreme storms of the “future” are already here. 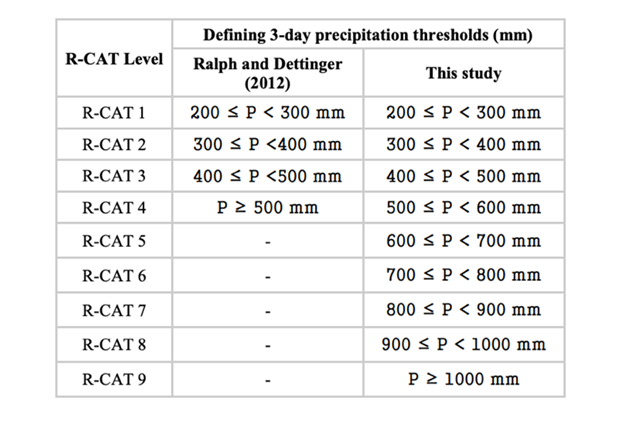 Table 1. Definition of R-CAT events and modifications to the original R-CAT scale. 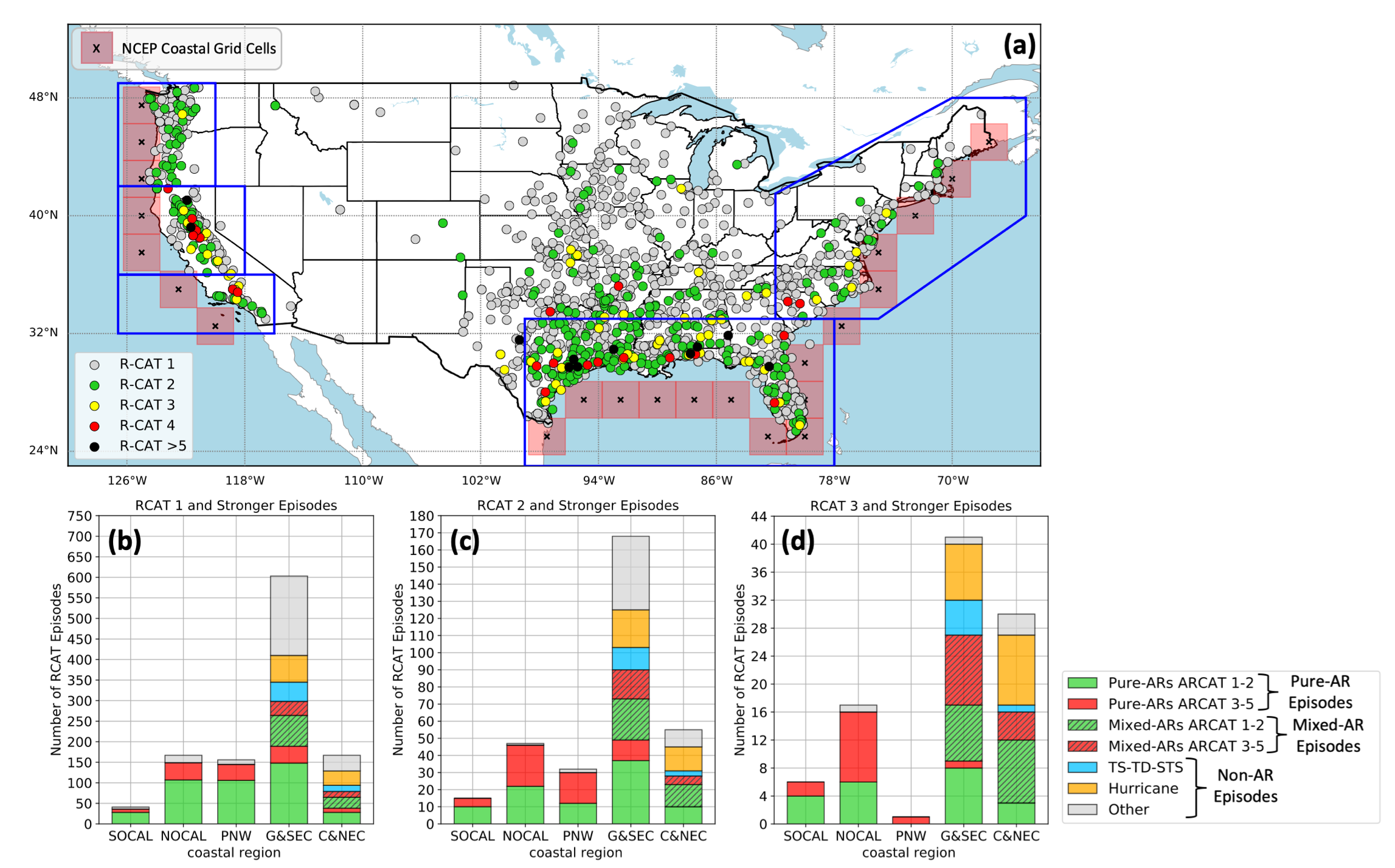 Figure 1. (Fig. 6 from Lamjiri et al., 2020): (a) Center location of the R-CAT episodes, 1950-2015, colored based on their R-CAT levels with blue polygons showing coastal regions used in panels b-d. (b), (c), and (d) show number of R-CAT 1 and stronger, R-CAT 2 and stronger, and R-CAT 3 and stronger episodes, respectively, in each coastal region associated with pure-ARs (solid green and red bars), mixed ARs ( ARs mixed with hurricanes and tropical storms, hatched green and red bars), and non-ARs (tropical storms, tropical depressions, and subtropical storms (TS-TD-STS), hurricanes, and other processes, shown by blue, orange, and gray bars, respectively).