The Hydrometeorological Observation Network in California’s Russian River Watershed: Development, Characteristics and Key Findings from 1997 to 2019

CW3E postdoc Edwin Sumargo, along with CW3E Director F. Martin Ralph; CW3E members Anna Wilson, Rachel Weihs, Maryam Asgari-Lamjiri, and Luca Delle Monache; NOAA/PSD collaborator Allen White; Sonoma Water collaborator James Jasperse; and USACE/ERDC collaborators Stephen Turnbull and Charles Downer, published a paper in the Bulletin of American Meteorological Society titled “The Hydrometeorological Observation Network in California’s Russian River Watershed: Development, Characteristics and Key Findings from 1997 to 2019” (Sumargo et al. 2020). This work supports the Forecast-Informed Reservoir Operations Priority Area within CW3E’s 2019-2024 Strategic Plan. This article highlights the historical evolution and the current state of the Russian River Hydrometeorological Observing Network (RHONET), and its implications for hydrologic research and operations in Northern California. This network has been built up over 20+ years during several epochs, including most recently in support of Forecast-Informed Reservoir Operations with USACE and Sonoma Water, and with an eye toward developing knowledge of what observations would be needed in the future to support California’s needs for hydrometeorological information related to drought and flood monitoring and mitigation across the state. The paper highlights the inter-agency collaboration involving CW3E, DWR, NOAA, Sonoma Water, and USACE under FIRO to enhance monitoring to improve water resource management and emergency preparedness in the Russian River Basin.

RHONET is a unique suite of high-resolution in-situ and remote-sensing observations deployed over 20 years to address both scientific and operational gaps in understanding, monitoring and predicting weather and water extremes on the United States’ West Coast. It was created over many years by diverse organizations ranging from universities to federal, state, and local government agencies and utilities. Today, RHONET is a hybrid network with diverse observation sets aimed at advancing scientific understanding of physical processes driving extreme precipitation and runoff in the region (Fig. 1). This article describes the development of RHONET, including the specific goals that led to a series of network enhancements, as well as the key characteristics of its sensors. The hydroclimatology of the Russian River area, including hydrologic extremes and variability driving the scientific and operational needs in the region, are reviewed here, from AR behavior and orographic precipitation processes to hydrologic conditions related to water supply and flooding. A case study of Lake Mendocino storage response to a landfalling AR in 2018 demonstrates the network’s performance and hydrologic applications during high-impact weather events. Key scientific findings and applications enabled by the network include the first documentation of the role of landfalling ARs in flooding, the occurrence and importance of shallow non-brightband rain, the buffering influence of extremely dry soils in autumn, and the development of forecast-informed reservoir operations for Lake Mendocino. 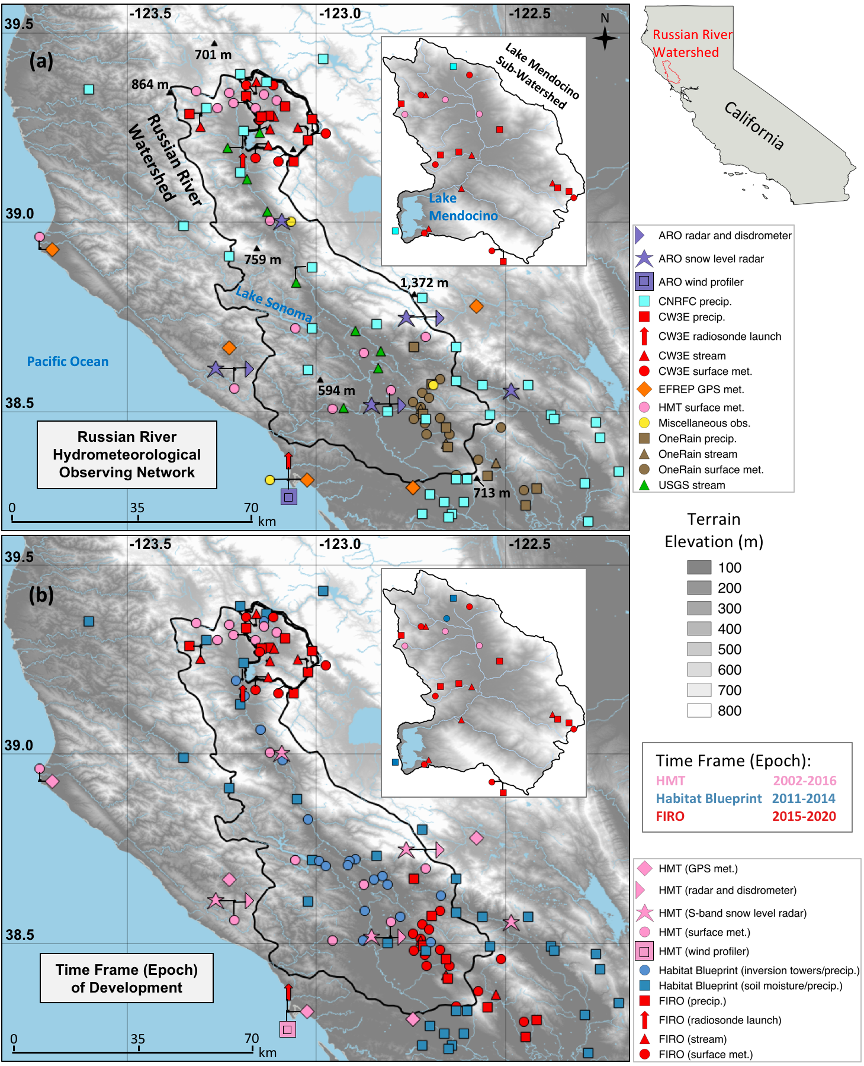 Figure 1. Terrain base maps showing (a) the existing RHONET in the Russian River Watershed and the immediate surrounding areas and (b) its development throughout the HMT, Habitat Blueprint, and FIRO epochs. The bold boundaries demarcate the Lake Mendocino Sub-Watershed. Different colors represent different (a) networks and (b) epochs. The inset maps show those within the Lake Mendocino area. The California map on the top right displays the location of Russian River Watershed in California.