During the last few weeks CW3E’s perspectives have been highlighted at three science policy-oriented meetings. The connection between CW3E’s scientific activities, practical applications and water policy implications is a common theme among them. The meetings and a brief synopsis are provided below:

AGU invited three speakers to a Congressional briefing they organized to communicate to staff supporting a number of elected officials and policy committees. The goal was to make the connection between basic science advances (and the funding that has supported them), and benefits to American Security. CW3E’s Director, Dr. Ralph, represented the role of basic geoscience research in advancing water security in the Western U.S. His presentation emphasized the critical roles of key science funding strategies, from standard grants programs, to directed research efforts, cooperative agreements and federal labs. And in the end concluded that many breakthrough advances result not from a systems engineering approach to deciding what to do, but from ideas that are “outside the box.” He also highlighted that science, at its core, is fundamentally a creative endeavor that requires long-term support for people in their careers and for the organizations that host them. AGU has posted a video of the briefings here. 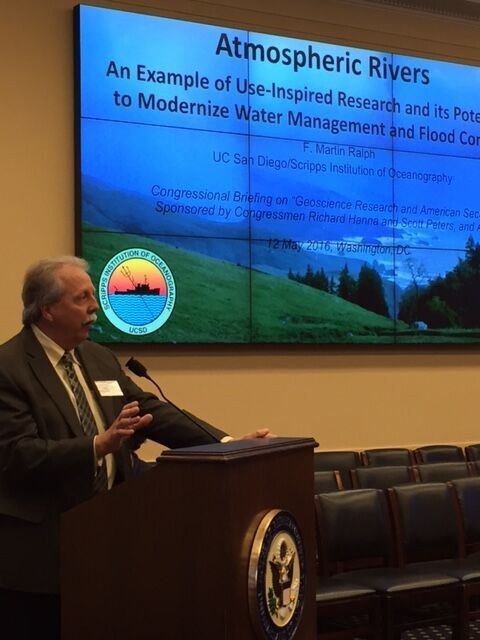 NOAA invited water management stakeholders from across the West to hear about the National Water Center they are creating in Alabama and to listen to stakeholders interests and needs for weather and water information to support water supply, flood mitigation and endangered species restoration in the West. CW3E was represented by Dr. Ralph, who brought Scripps science into the discussion, and supported major points presented by water managers concerning the vital role of atmospheric rivers in western water decisions. NOAA held one other regional “listening session” – in Alabama, and is holding one more “National” session in July. They will be considering input from these meeting as they develop their agency’s strategies in the coming years to support water information needs for the nation.

The National Academies of Science recently released a report on the subject of science needed to enable subseasonal-to-seasonal predictions to support decisions. The Western States Water Council (a group supporting the Governors of 17 Western States) organized a regional Workshop in San Diego in early June to discuss both the user requirements for better forecasts and the science opportunities to achieve them. CW3E was represented well, including participation by Sasha Gerhunov, Tamara Shulgina and Marty Ralph, including a presentation by Marty on observing system needs to support the goals.