An Airborne Study of an Atmospheric River over the Subtropical Pacific during WISPAR: Dropsonde Budget-Box Diagnostics and Precipitation Impacts in Hawaii 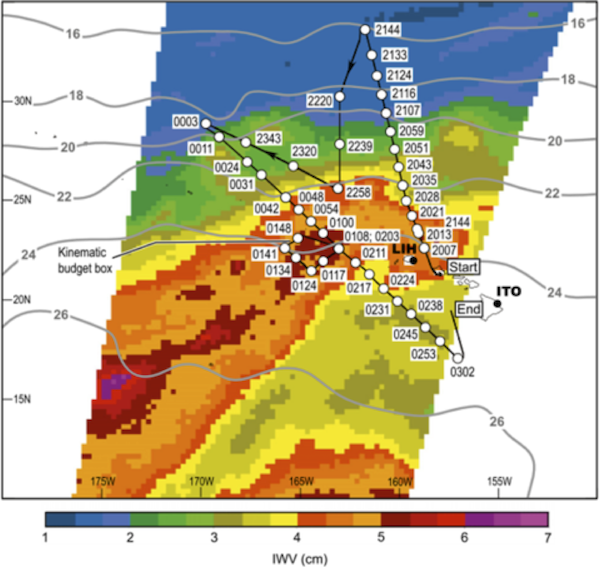 The upcoming CalWater-2 experiment, which is organized by CW3E scientists and others from NOAA, NASA, DOE, USGS and elsewhere, will be using research aircraft to observe atmospheric rivers over the Northeastern Pacific Ocean and U.S. West Coast. This presents an opportunity to measure atmospheric river (AR) structure and embedded physical processes that control the water vapor transport budget. This paper develops some of the key diagnostic tools needed and demonstrates them using a flight pattern and dropsondes designed to calculate the vertical profile of water vapor flux divergence (and other key parameters) in an AR. These tools and associated flight strategies will be critical to future airborne field campaigns that will enable CW3E and colleagues to diagnose key AR-relevant physical processes and to then assess in detail their representation in weather and climate models.

In 2011 a short airborne campaign was conducted to demonstrate the ability of an unmanned aircraft (Global Hawk) to fly over ARs and sample them using dropsondes. As part of this successful demonstration of UAS technology – WISPAR – a special flight of the NOAA G-IV aircraft was also conducted. The paper presents a summary of this flight, including use of drospondes from a box pattern over an AR to calculate vertical profiles of divergence, water vapor flux divergence, sensible heat flux divergence and vertical air motions. The same AR studied here also produced over 10 inches of rain on the normally dry side of the Hawaiian Islands due to the anomalous water vapor transport conditions associated with the AR hitting the region.

The Winter Storms and Pacific Atmospheric Rivers (WISPAR) experiment was carried out in January–March 2011 from the National Aeronautics and Space Administration (NASA) Dryden Flight Research Center as a demonstration for utilizing unmanned aerial systems in meteorological research and operations over data-sparse oceans. One of the campaign’s three missions was coordinated with a manned National Oceanic and Atmospheric Administration Gulfstream-IV (G-IV) flight out of Honolulu, Hawaii, on 3–4 March 2011. The G-IV, which flew through a developing atmospheric river (AR) west of Hawaii, represents the cornerstone observing platform for this study and provided the southernmost dropsonde observations of an AR published to date in the subtropical Northern Hemisphere. The AR exhibited characteristics comparable to those observed in previous studies farther north in the subtropics and midlatitudes, save for larger integrated water vapor and weaker winds in the AR core and stronger equatorward vapor fluxes in the shallow post-cold-frontal northeasterly flow. Eight dropsondes released in a ~200-km-wide box formation provided a novel kinematic assessment of tropospheric vorticity, divergence (mass, water vapor, sensible heat), and vertical velocity in the AR region, as well as sea surface fluxes. The budget-box diagnostics were physically consistent with global-gridded reanalysis datasets, while also providing useful additional kinematic and thermodynamic information on the mesoscale. Meteorological impacts of the AR were assessed on Hawaii’s island of Kauai, where the state’s heaviest rainfall was observed for this case. Rainfall on Kauai was modulated significantly by its steep orography, including on the normally dry side of the island where heavy rains fell.

A personal use copy of the article is available here.