The HIHE–AR relationship was studied over a 10-water year period from Oct 2004 through Sep 2014 with HIHE reports obtained from the National Centers for Environmental Information (NCEI) Storm Events Database and AR dates obtained from a catalog of landfalling ARs from Rutz et al. (2013). Some detailed results are provided below. More information is contained in a manuscript that was recently published in the AGU Geophysical Research Letters: Young, A. M., K. T Skelly, and J. M. Cordeira, 2017: High-Impact Hydrologic Events and Atmospheric Rivers in California: An Investigation using the NCEI Storm Events Database. Geophys. Res. Lett., 44, doi:10.1002/2017GL073077. click here for personal use pdf file 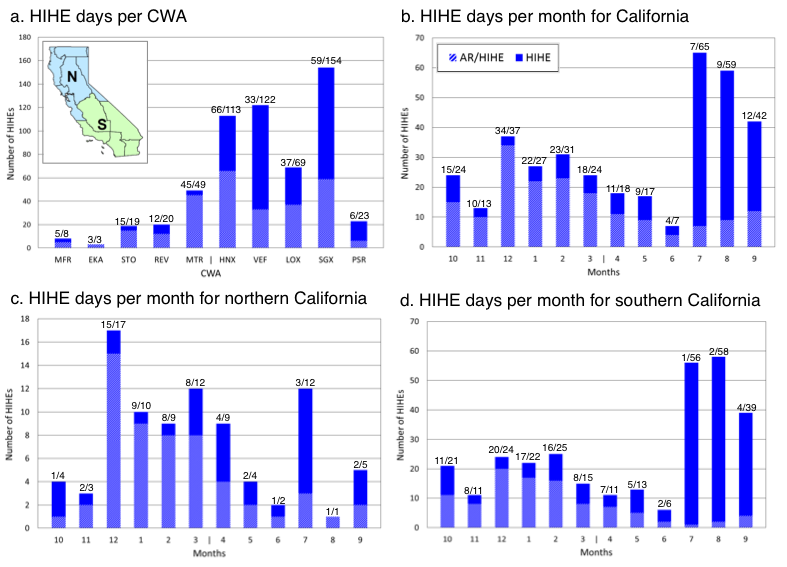 This study illustrated that HIHE days contained within the NCEI Storm Events Database for CWAs across California can be attributed to landfalling ARs and their associated precipitation extremes. This attribution is largely valid for HIHE days across northern California in the cold season and not necessarily valid for HIHE days across southern California during the warm season. Approximately 57% of all HIHE days in California occurred during the warm-season, mostly in conjunction with flash floods, and 75% of these HIHE days were not associated with ARs. The composite analysis of flash flood days across California illustrated the climatological warm-season flow pattern for precipitation across southern California and closely resembled the type-IV monsoon synoptic pattern as defined by Maddox et al. (1980). This result motivates additional future work that could focus on the role of the North American monsoon and other non-AR processes that produce HIHEs across California.

Support for this project was provided by the State of California-Department of Water Resources and the U.S. Army Corps of Engineers, both as part of broader projects led by CW3E. Dr. Cordeira and his graduate students at Plymouth State University actively collaborate with CW3E on topics related to atmospheric rivers, such as analyzing, understanding, and forecasting their impacts along the U.S. West Coast.