The Landfall Tool displays the probability and timing of AR conditions at each point on the map in a line along the U.S. West Coast from the GEFS model over the next three weeks. The probability of AR conditions represents the number of ensemble members that predict 850-hPa Water Vapor Flux greater than 50 (kg/kg)*(m/s) at the given location and time. Week 1 shows three-hourly temporal resolution, week two is daily averages, and week three is the weekly average. These plots are created by Jason Cordeira, Plymouth State University.

A multi-model experimental forecast for week-3 AR occurrence (defined as the # of AR days per week) is shown below for the NCEP, ECMWF, and ECCC dynamical models. The top row shows climatological values of AR occurrence in each model’s hindcast record for the week-3 verification period. The bottom row shows the departure of the AR occurrence forecast for that same verification period (forecast minus top panel climatology). For this row, blue and green values represent higher than average AR activity predicted during week-3; yellow and orange values represent lower than average AR activity predicted during week-3. Grey rectangles surround grid cells where >75% of forecast ensemble members agree on the sign of the AR occurrence anomaly with respect to climatology. These regions can be interpreted as having higher confidence in their prediction of week-3 AR occurrence.

Time integrated week-3 IVT (kg m-1) at various locations along the U.S. West Coast from the ECCC Global Ensemble Prediction System (GEPS). IVT associated with an AR (red bars) and non-AR IVT (blue bars) are plotted for each ensemble member, the control member, and the ensemble mean. AR related IVT is detected using the Guan and Waliser (2015) algorithm. Ensemble spread in total IVT and AR-related IVT are shown in the box and whisker plots. Climatology of total IVT for this week is represented by the dashed line. These plots are created by Aneesh Subramanian, CW3E and Zhenhai Zhang (CW3E).

Forecasts for ridging at lead-times of weeks1+2, weeks3+4 and weeks5+6 are shown below. These forecasts are for three different ‘ridge types’ that have been shown in recent research [more information here] to strongly influence atmospheric rivers and precipitation across the US West Coast. In these plots, the left panel shows the occurrence frequency of each ridge type (bars) compared to climatology (horizontal line) for each of the 50 ECMWF model ensemble members. If over 50% of the ensemble members predict more ridging than expected (for this time of year) then the right panel maps are displayed indicating the likelihood of wet or dry conditions based on how these ridge types typically influence precipitation 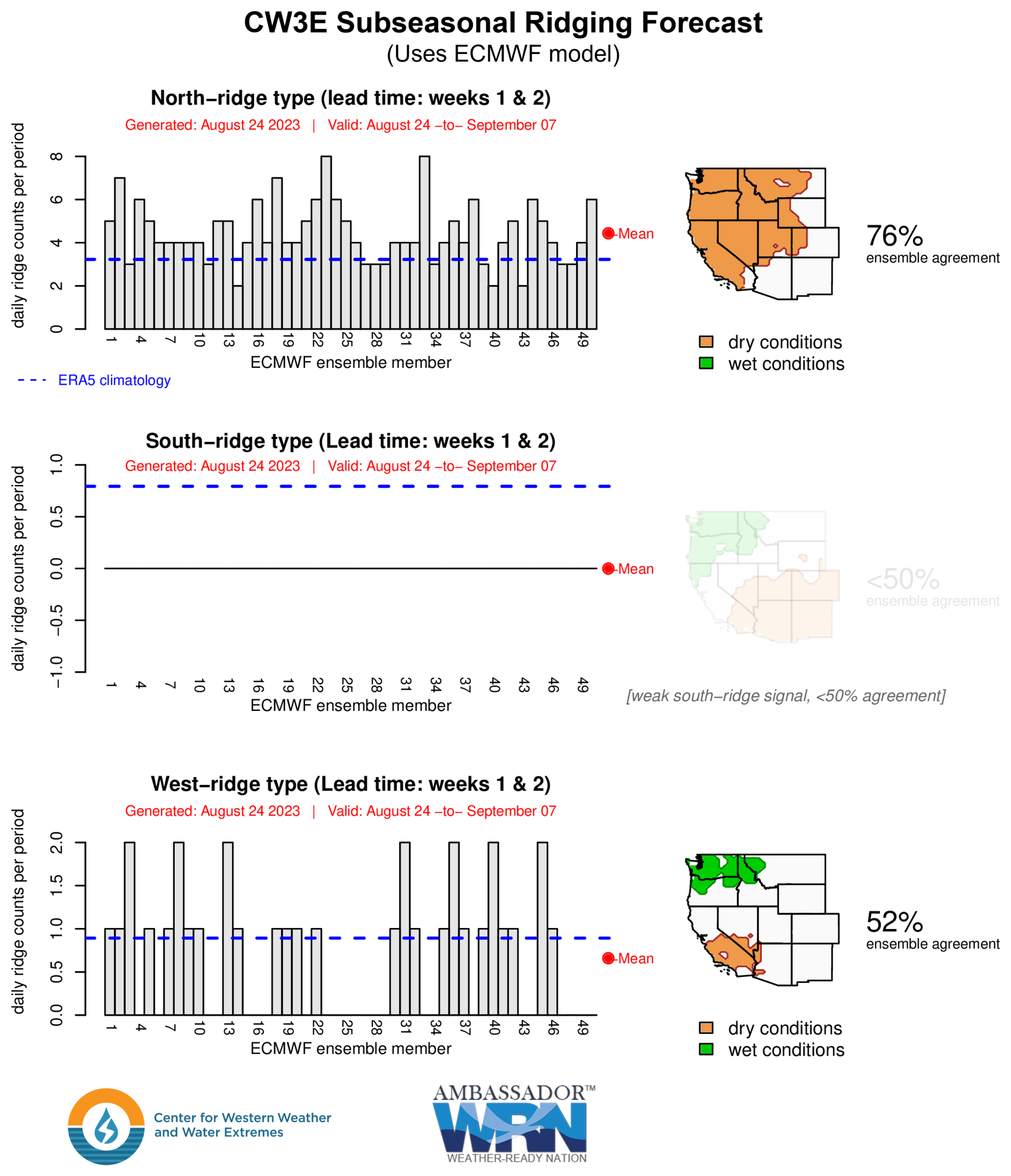 All products displayed on this page are considered experimental.