The left map represents the AR scale observed over the previous 7 days from the 0-hour analysis of the specified control forecast as well as the 7-day precipitation accumulation estimate.

Observed: Because IVT is not easily directly measured, a modeled 0-hour forecast, often referred to as model analysis, is used for observations of IVT.

Global Ensemble Forecast System (GEFS): The US national weather model developed and operated by the National Centers for Environmental Prediction (NCEP), which is made up of 31 separate forecasts, or ensemble members. Plots will update approximately six hours after initialization time (~5, 11, 17, 23 PDT).

European Centre for Medium-Range Weather Forecasts (ECMWF) Ensemble Prediction System (EPS): The European weather model developed and operated by ECMWF, which is made up of 51 separate forecasts, or ensemble members. Plots will update approximately ten hours after initialization time (~3, 15 PDT).

The right map represents the AR scale forecasted over the next 7 days from the ensemble mean or control forecast and 7-day quantitative precipitation forecast.

Control Forecast: The model run that is not perturbed, or altered from the current conditions. This is thought to be the best guess for a single model, also known as the deterministic model.

Ensemble Mean: The average of the set of forecasts created by the different forecasts members within each ensemble model.

The AR scale is determined based on the duration of AR conditions (IVT >250 kg m-1 s-1) and maximum IVT during the AR as described in Ralph et al. 2019. For a description of the AR Scale view the video below.

Click here to sign up to receive text message or email AR Scale alerts when ARs are forecasted to impact the U.S. West Coast.

For more information on this product click here to view an overview video.

The map on the left shows the AR scale forecasted over the next 7 days from the ensemble mean or control forecast at each dotted location. The largest dot represents the chosen location for the middle and right plots.

The plot on the right shows where each identified AR falls on the AR Scale matrix and how the AR scale is calculated, identified by letters at the top of each AR in the center diagram. Time periods where IVT >250 kg m-1 s-1 but the duration is less than 24 hours will be represented by gray shading in the center diagram and ◯’s for time periods in the analysis (ie observed) period and X’s for time periods in the forecast on the right plot.

For more information on this product click here to view an overview video.

Top left: The plume diagram represents the integrated water vapor transport (IVT) forecast for each of the individual ensemble models (thin gray lines), the unperturbed GFS or ECMWF control forecast (black line), the ensemble mean (green line), and plus or minus one standard deviation from the ensemble mean (red line (+), blue line (-), and gray shading). Colored shading represents the AR scale forecast for the given time, shaded according to scale, calculated using the model control forecast. Bottom left: Shading represents the probability of AR Scale conditions at the given location calculated by the number of ensemble members predicting a given AR Scale at each forecast lead time. Top right: Dots on the map represent the maximum AR Scale forecast from the GFS or ECMWF control member at that grid point for the next seven days. Colored shading represents the GFS or ECMWF 7-day accumulated precipitation forecast. The enlarged dot indicates the location the other plots in this diagram are representative of. Bottom right: AR Scale magnitude and timing calculated for each GEFS or ECMWF EPS ensemble members shaded according to scale. Values in shading represent the magnitude and timing of maximum IVT during each forecasted AR. Gray shading in each panel represents IVT >250 (kg m-1s-1 for a duration less than 24 hours. 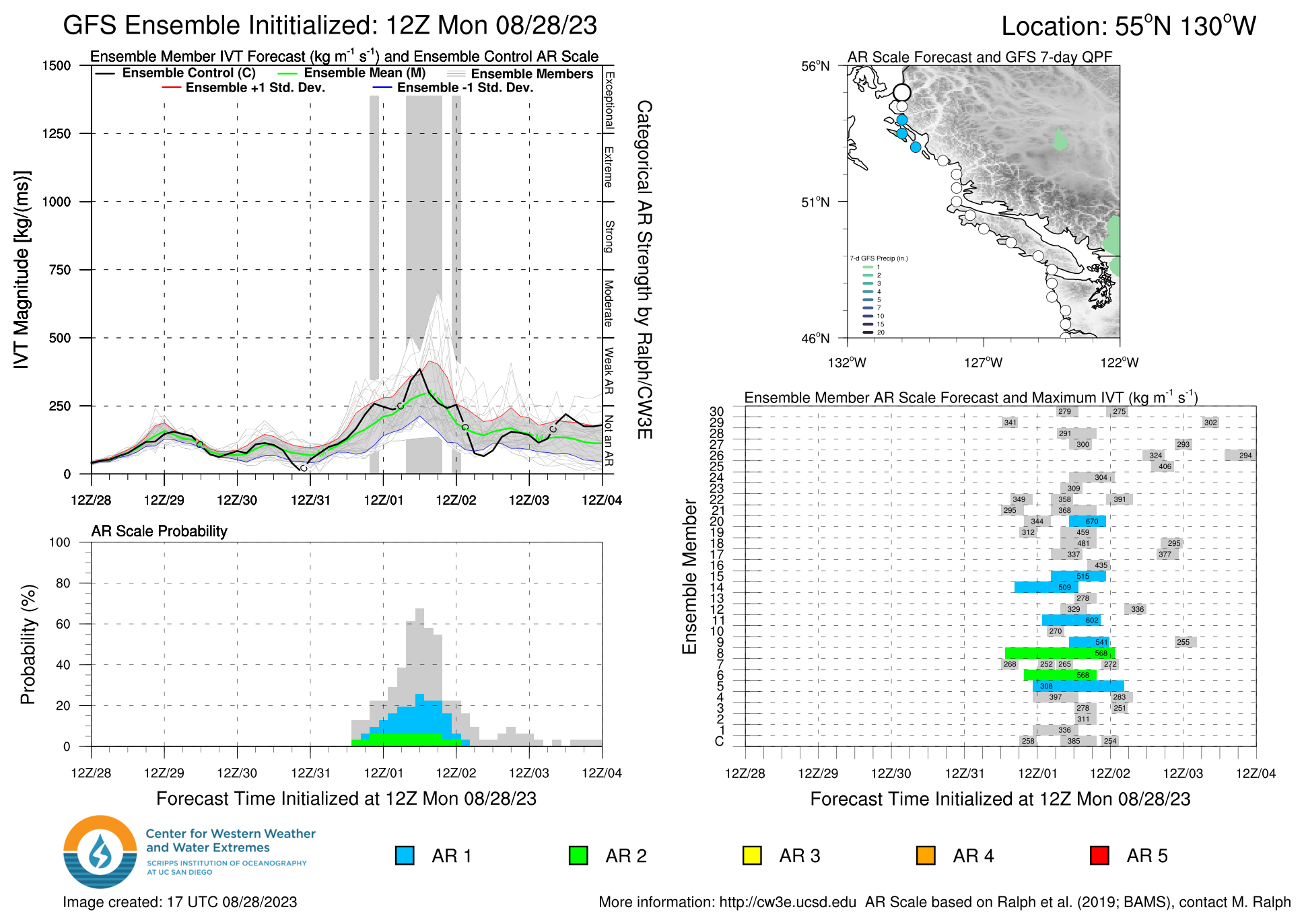 All model data provided courtesy of NOAA/NCEP or ECMWF. All products are considered experimental.