The products are provided “as is” and are intended for research purposes only (disclaimer).

IWV, IVT, and Time-Integrated IVT Click on an image to see forecasts out to 180 hours from the GFS, ECMWF, and NAM

These meteograms illustrate the forecasted conditions over a given locations for the 3 or 7-day forecast period from the GFS. The top panel includes water vapor flux (kg m-2s-1) or relative humidity (%) shaded with the 0°C isotherm contour and wind barbs(m/s), gray shading indicates location elevation. The middle plot illustrates the 3-hour precipitation represented by the bars, total 72-hour precipitation, height of the 0oC isotherm, and location elevation. When the freezing level is below the location elevation, line and bars are blue representing the likelihood of snow and when the freezing level is above the location elevation line and bars are green representing the likelihood of rain. The bottom plot illustrates the IWV and IVT, as well as the presence of AR conditions shaded in gray. The yellow dot on the map indicates the location of the current plot. Click here to view Alaskan domain

These cross sections illustrate the forecasted conditions along a longitudinal line from 25-65°N for the given forecast time from the GFS or ECMWF deterministic model. The top panel shows water vapor flux (kg m-2s-1, shaded), the 0°C isotherm (contour), and wind barbs (m/s) and the bottom panel illustrates the IWV and IVT. Black shading in the top panel represents terrain. The dashed lines on the bottom panel illustrate thresholds for AR conditions. The map on the left shows the location of the cross section as well as the IVT (kg m-1s-1) at the forecast time. Gray shading indicates the presence of AR conditions (IVT >250 kg m-1s-1 and IWV >20 mm). Select the model, longitude, and forecast lead time from the menus to see the cross section and click the image to open in a new window.

The probability CW3E AR Landfall Tool displays the likelihood and timing of AR conditions at each point on the map in a line along the U.S. West Coast or inland derived from the NCEP GEFS model over the next 16 days. The probability of AR conditions represents the number of ensemble members that predict IVT to be greater than the chosen threshold at the given location and time. To see how each forecast type has changed over the previous seven days click on dProp/dT. These plots are created by Jason Cordeira, Plymouth State Univeristy.

Select variable or threshold to be displayed, location, and forecast length to generate plot, click image to open in a new tab.

The plume diagrams below represent the integrated water vapor transport (IVT) magnitude forecast from each of the GEFS ensemble models (thin gray lines), the unperturbed GEFS control forecast (black line), the ensemble mean (green line), and plus or minus one standard deviation from the ensemble mean (red line (+), blue line (-), and gray shading). The dot on the map indicates the location of the current plot.

Forecast products based on the AR Scale developed in Ralph et al. (2019). Click on one of the images below to see the full suite of products for the AR Scale. This page includes products produced using the NCEP Global Forecast System (GFS), Global Ensemble Forecast System (GEFS), and the European Centre for Medium-Range Weather Forecasts (ECMWF) models. 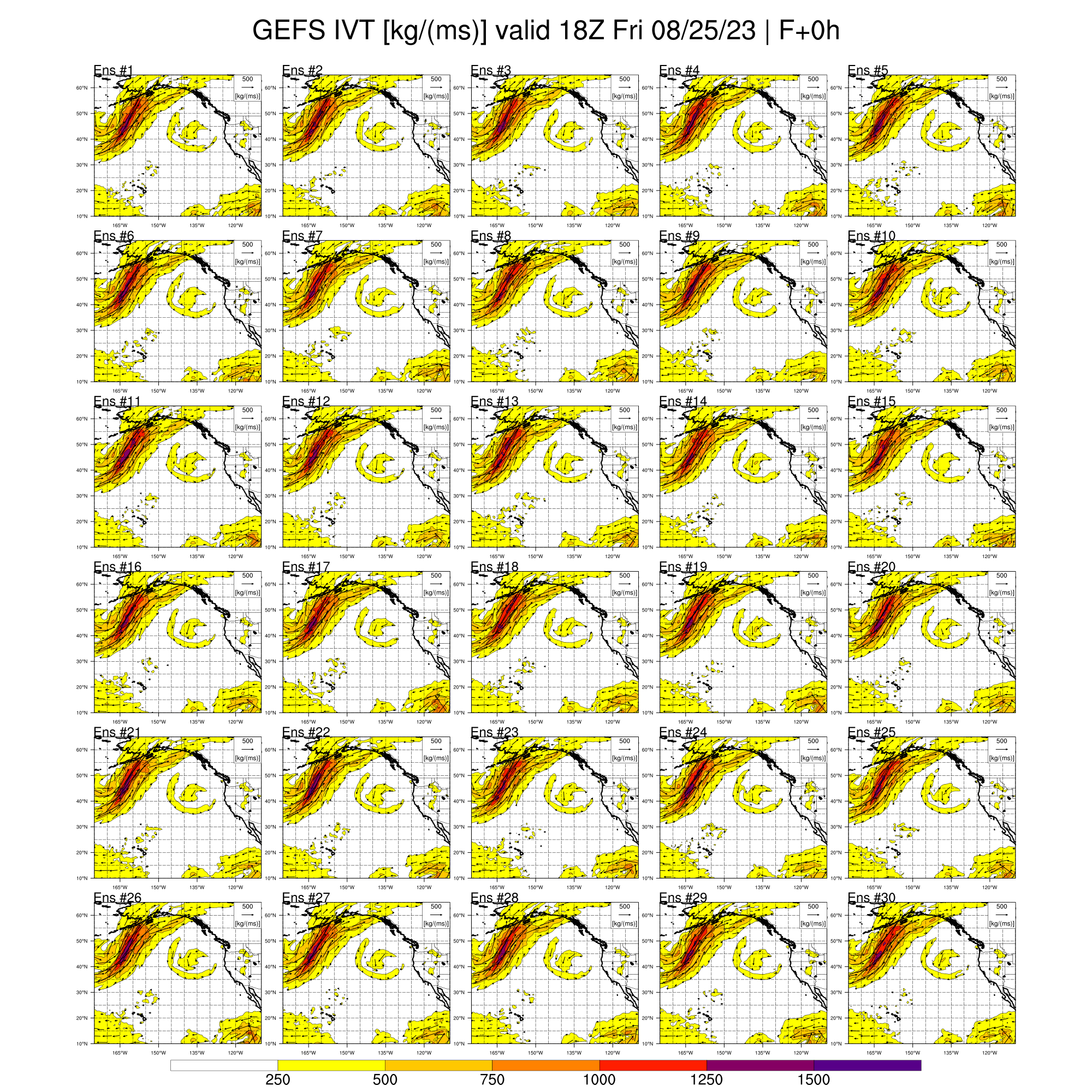 The above images display the 30 members of the NCEP Global Ensemble Forecast System (GEFS); each thumbnail shows IVT (kg m-1 s-1) magnitude shaded according to scale and IVT vectors.

A multi-model experimental forecast for AR occurrence (defined as the # of AR days per week) at week-1, 2, and 3 lead time is shown below for the NCEP dynamical model.

Weeks 1-2: Shading indicates the odds of AR occurrence for each day. ARs are defined using the Guan and Waliser (2015) algorithm and probability is calculated by the number of ensemble members predicting an AR at each grid point at 00 UTC on the given forecast day. Click on a panel to open in a new tab, click on title to open seven day panel plot.

Week 3: The top row shows the forecast number of AR days during week-3; the middle row shows the climatological values of AR occurrence in each model’s hindcast record for the week-3 verification period; the bottom row shows the departure of the AR occurrence forecast for that same verification period (top panel forecast minus middle panel climatology). For this row, blue values represent higher than average AR activity predicted during week-3; red values represent lower than average AR activity predicted during week-3. Grey rectangles surround grid cells where >75% of forecast ensemble members agree on the sign of the AR occurrence anomaly with respect to climatology. These regions can be interpreted as having higher confidence in their prediction of week-3 AR occurrence. The hindcast skill assessment associated with the NCEP, ECMWF, and ECCC hindcast systems is described in DeFlorio et al. (2019b).

The interactive maps pages take advantage of “web mapping services”, GIS-based coding/thinking, and interactive technologies in order to provide dynamic weather analysis and forecast graphics in support of the CW3E mission. The pages on this website provide weather analysis and forecast data on a range of spatial and geographic scales from National and West-Coast overviews to watershed-based and atmospheric river-related products.