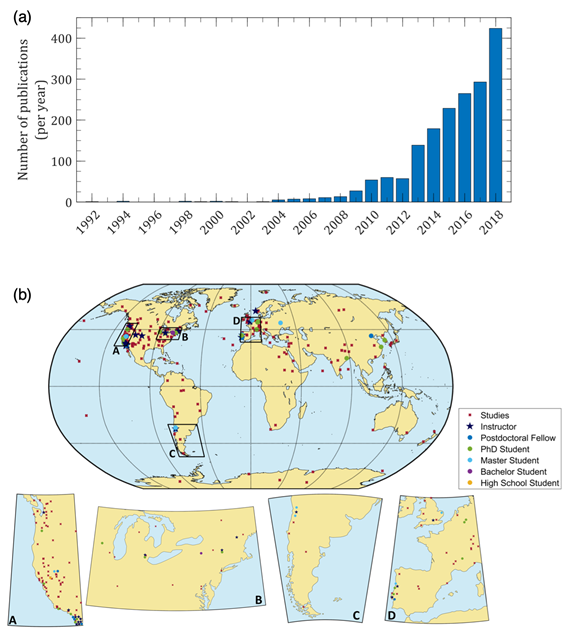 Figure 1. (from Wilson et al. 2020, BAMS summary of the AR Colloquium) a, Peer review journal articles referring to the topic of ARs published per year. The 2019 count represents January – August. Papers were counted via Google Scholar. b, Locations of Colloquium Summer School participants by education level, instructors, and study areas of ARs from Fig. 1a.

The idea for an International Atmospheric Rivers Conference emerged around 2014 as the community of interested scientists and users of AR information had grown beyond the point where individual sessions at broader conferences such as AGU and AMS annual meetings, or sessions at specialty conferences could serve the need for interactions (see Fig. 1 below for a summary of the publications on ARs as of 2019). At this time there was also a continuing debate around the relationship between the atmospheric river, warm conveyor belt and tropical moisture export topics. Exploring this debate was the motivation to convene a special meeting in 2015 to bring experts on these topics together for a collegial exchange of ideas and discussion. It was organized by Dr. F. Martin Ralph, Director of the recently developed Center for Western Weather and Water Extremes (CW3E), which hosted the workshop, as well as Mike Dettinger and David Lavers who were part of CW3E, and is summarized briefly at here.

An outcome from the 2015 AR Workshop was recognition of the value of bringing together experts on ARs and related subjects to have in-depth interactions on topics of common interest. Thus was born the idea for the International Atmospheric Rivers Conference. Dr. F. Martin Ralph organized a steering committee of international experts, which then convened the first IARC. The main goal was to bring together experts across the fields of atmospheric, hydrologic, oceanic, and polar sciences, as well as water management, civil engineering, and ecology, to advance the state of atmospheric river science and to explore new directions, improved means of disseminating AR forecast information, and upgrades to existing monitoring techniques. The conference was designed to maximize interaction time and encourage collaboration, and included breakout sessions and panel discussions along with traditional oral and poster sessions. The conference also strongly encouraged student participation.

IARC-2016 was hosted by CW3E in June 2016 at Scripps Institution of Oceanography’s beautiful “Seaside Forum” next to the beach in La Jolla, California. (The committee decided it was important for the event to be self-sustaining through use of registration fees, and that the fees would include support for 10 student scholarships that would cover their registration costs.) IARC-2016 brought together 100 attendees who shared results and ideas in 75 presentations over four days. Participants recommended IARC be held again in 2018. Once again CW3E hosted the conference at Scripps, this time in June 2018 with 125 attendees sharing 100 presentations. Once again attendees recommended IARC be held again in 2020. This time the decision was made to hold it overseas, and with the gracious offer from Dr. Rene Garaud of Univ. of Chile, Santiago, to host the conference, it was decided to hold IARC-2020 in Chile. As of late 2019 the steering committee had been formed and the dates had been set for October 2020. It is envisioned that henceforth IARC will be held every other year, alternating between Scripps in La Jolla, and an international location.

A related development began just before IARC-2016. It was decided to create a book on atmospheric rivers. Dr. F. Martin Ralph led the formation of a leadership team, identified funding for the technical editing of the book, and invited contributing authors from around the world. The book, entitled “Atmospheric Rivers,” edited by Ralph, Dettinger, Rutz and Waliser, includes 8 chapters, more than 20 contributing authors and is being published by Springer in early 2020.

An outgrowth of IARC-2018 was the idea to bring graduate students (primarily) together with AR experts for a two-week-long AR Summer Colloquium. It included 31 students and 19 instructors, and was held in June-July 2019 at Scripps Institution of Oceanography. It was sponsored and hosted by CW3E, with support from the US Army Corps of Engineers’ Atmospheric Rivers/ Forecast-Informed Reservoir Operations program. The overarching goal of the colloquium was to provide the next generation of atmospheric scientists with an in-depth look at cutting edge techniques in understanding, monitoring, and predicting ARs and their associated high-impact weather. To achieve this goal, the Colloquium brought together a diversity of early career researchers, mid-career and senior scientists, as well as practitioners who use AR information. The attendees ranged from a recent high school graduate to recent Ph.D graduates and came from 25 different institutions located in 11 countries (https://cw3e.ucsd.edu/the-ar-colloquium-kicks-off/). 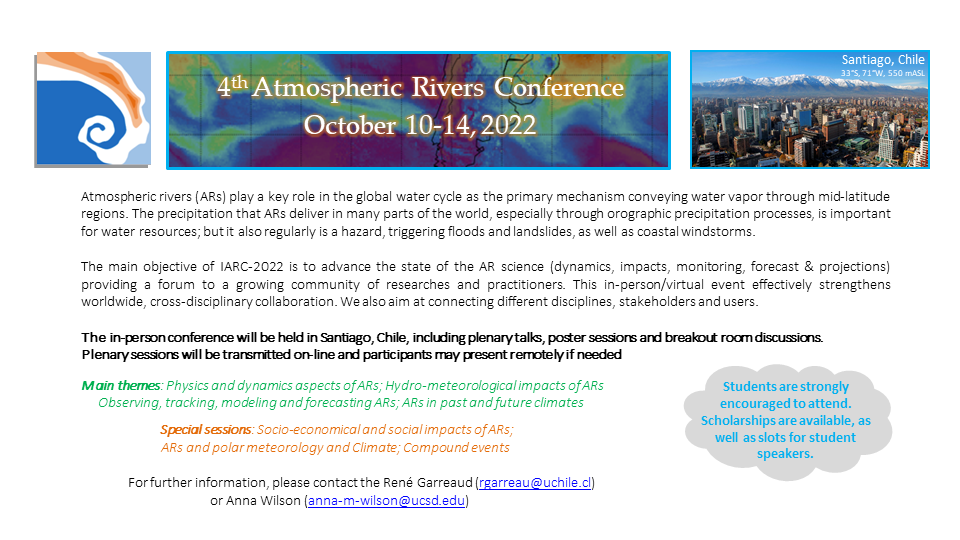 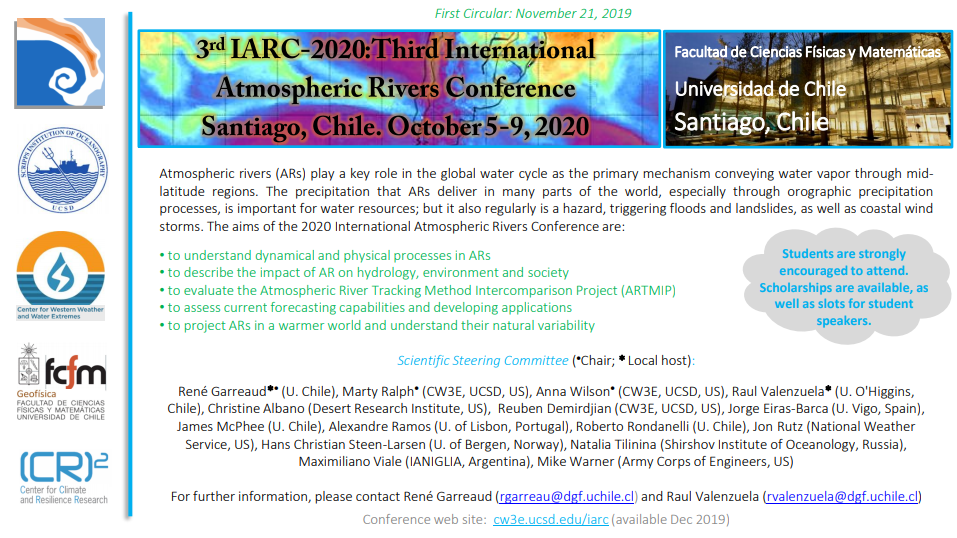 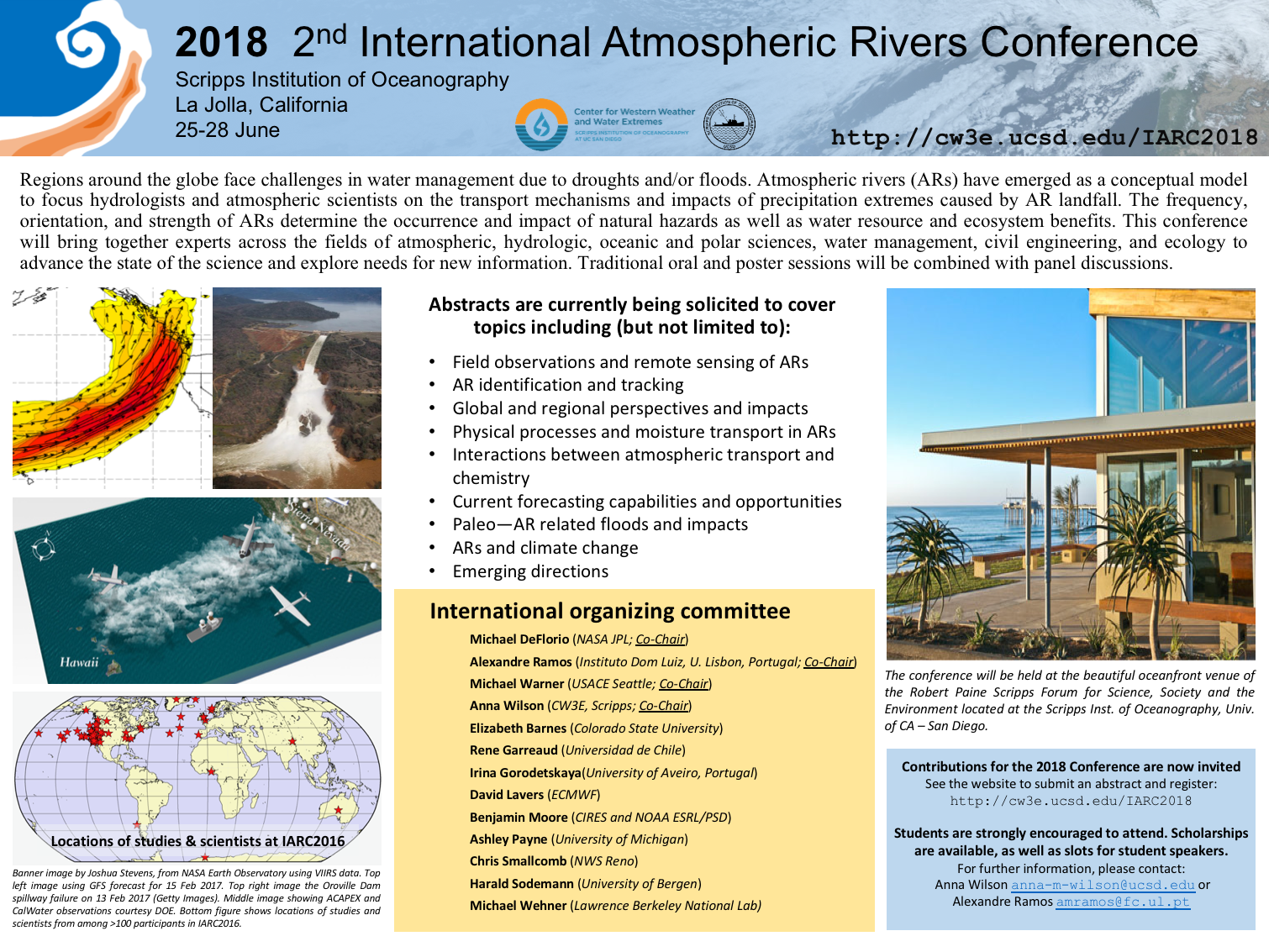 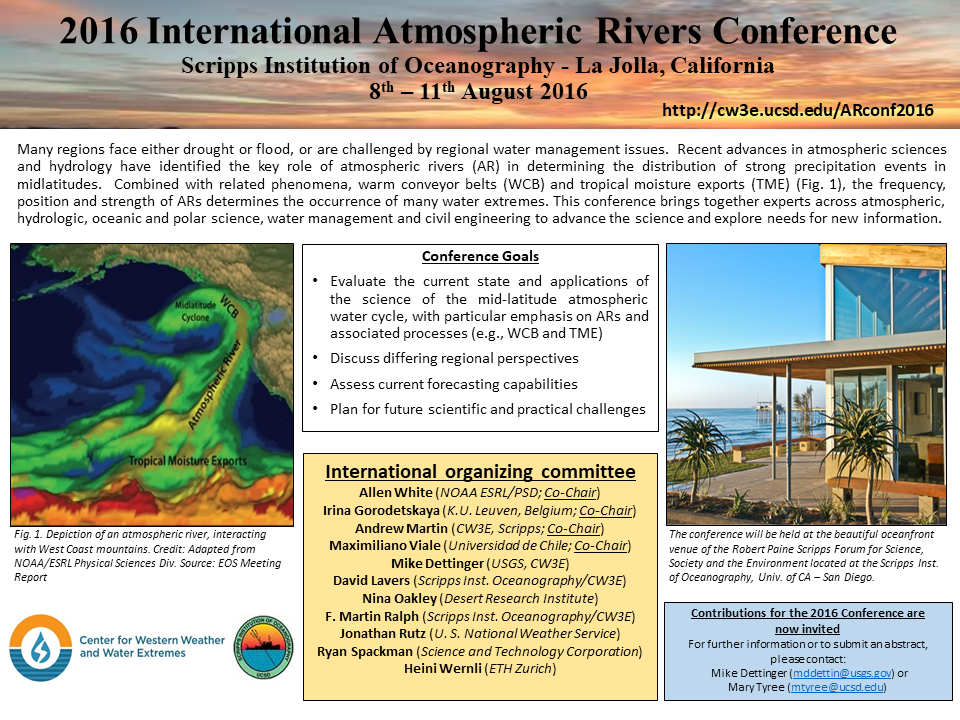