(Please click here for a personal use copy of the article) 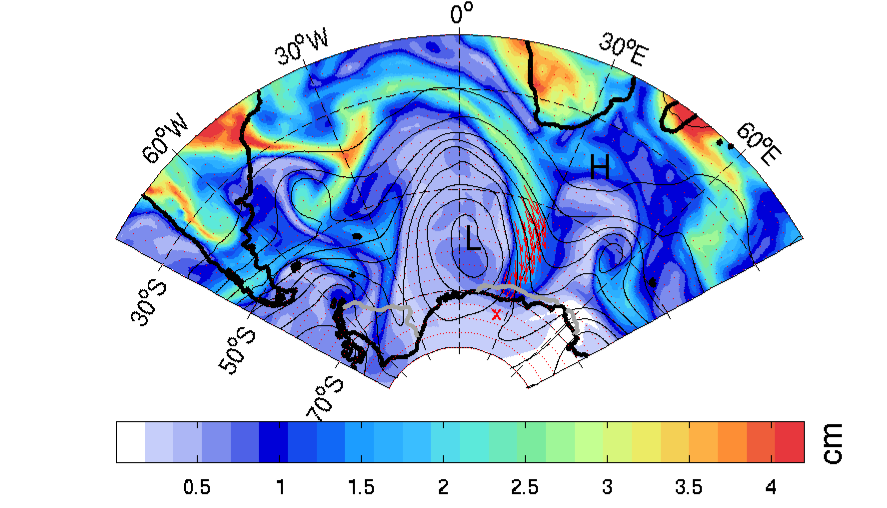 Understanding changes in the Antarctic ice sheet mass are important for predicting global sea level rise. Recently, East Antarctica gained substantial mass, counterbalancing the increasing ice discharge from West Antarctica in these years. Occasional large snowfall events explained this increased mass load, which has been especially high in 2009 and 2011. Ground-based measurements at the Belgian Antarctic station Princess Elisabeth, established at the ascent to the East Antarctic plateau, have well captured these occasional intense snowfalls and associated snow accumulation responsible for 2009 and 2011 mass anomalies. The question is what has been causing this high accumulation?

Most of the water vapor transforming into the Antarctic snowfall arrives from lower latitudes. We have established that atmospheric rivers explain all extremely high snow accumulation events leading to the mass anomaly at Princess Elisabeth station in 2009 and 2011. These narrow bands of high moisture content have been more known in mid latitudes for their, sometimes catastrophic, impacts, such as heavy precipitation resulting in floods. The atmospheric rivers reaching the Antarctic ice sheet bring a lot of moisture from as far as subtropics and result in intense snowfall when reaching the steep ascent to the Antarctic plateau.
In addition, the work represents a significant advance in the understanding of how the global water cycle is affected by atmospheric rivers by

Recent, heavy snow accumulation events over Dronning Maud Land (DML), East Antarctica, contributed significantly to the Antarctic ice sheet surface mass balance (SMB). Here we combine in situ accumulation measurements and radar-derived snowfall rates from Princess Elisabeth station (PE), located in the DML escarpment zone, along with the European Centre for Medium-range Weather Forecasts Interim reanalysis to investigate moisture transport patterns responsible for these events. In particular, two high-accumulation events in May 2009 and February 2011 showed an atmospheric river (AR) signature with enhanced integrated water vapor (IWV), concentrated in narrow long bands stretching from subtropical latitudes to the East Antarctic coast. Adapting IWV-based AR threshold criteria for Antarctica (by accounting for the much colder and drier environment), we find that it was four and five ARs reaching the coastal DML that contributed 74–80% of the outstanding SMB during 2009 and 2011 at PE. Therefore, accounting for ARs is crucial for understanding East Antarctic SMB.