A Climatology of Narrow Cold-Frontal Rainbands in Southern California

Narrow cold-frontal rainbands (NCFRs) are mesoscale features (fine-scale features, typically a few to tens of kilometers in spatial extent and lasting hours) that are embedded within extratropical cyclones, and can produce short-duration, high-intensity precipitation capable of triggering flash flooding or debris flows. Research related to NCFRs spans several decades and numerous case studies of these events have been used to improve understanding related to their development and evolution, forecasting, and impacts to affected communities (Cannon et al., 2020, Jorgensen et al., 2003, Houze et al., 1976, Sukup, 2016). Southern California is one such impacted region, where in 2017 a NCFR lead to the issuance of multiple warnings by local National Weather Service offices (Figure 1), and in 2018 where a NCFR passed over the Thomas Fire burn scar in Santa Barbara County, causing disastrous and deadly debris flows (Oakley et al. 2018). In an effort to create a comprehensive understanding of how these features have affected Southern California, we created a climatological record of these events manually using rain gauge observations and NEXRAD weather radar reflectivity imagery.

For the October-May period of years 1995-2020 we identified 94 individual NCFRs within the Southern California Bight, with as few as 0, as many as 10, and an average of 3 events occurring per water year, with a majority occurring in the late fall and winter months. Using atmospheric reanalysis, we identified common large-scale meteorological ingredients for NCFR events, including a low-pressure system off of the US West Coast, a decreasing sea level pressure tendency off the coast of Southern California, and an integrated water vapor maxima accompanied by an upper-level jet streak exit region within the study domain. Radar reflectivity composites of NCFR events suggest San Diego County sees more frequent intense landfalling NCFRs as compared to the rest of Southern California, though future work is needed to verify this is not a bias in radar observation. Additional results related to the movement characteristics of a sub-sample of events show that individual NCFR cores tend to move towards the east at an average speed of 14 m/s. Relationships between the identified NCFRs and National Weather Service Warnings reveal that although numerous events (45) are associated with at least one flash flood, severe thunderstorm, or tornado warning, only a small number of extreme NCFR events (15) are associated with many (>10) warnings.

This research supports the CW3E goal of advancing the understanding and projections of extreme precipitation events by laying the foundation for deeper dives into how NCFRs impact Southern California and how to improve forecasting of these events. The regional NCFR catalogue developed provides a large set of events that can be used to examine how numerical weather prediction models represent these mesoscale systems, especially in the presence of complex topography, which is found throughout Southern California. In addition, the NCFR catalogue provides a novel training dataset that can be used to develop an automated detection algorithm for NCFRs using radar reflectivity data. NCFRs have been shown to be impactful precipitation events in Southern California and other mid-latitude regions of the world associated with forecast uncertainty, motivating the need to allocate further effort towards understanding and forecasting them. Broadly, the work presented here, as well as future work, may be applied to other mid-latitude regions that are affected by extratropical cyclones and where radar data are available. 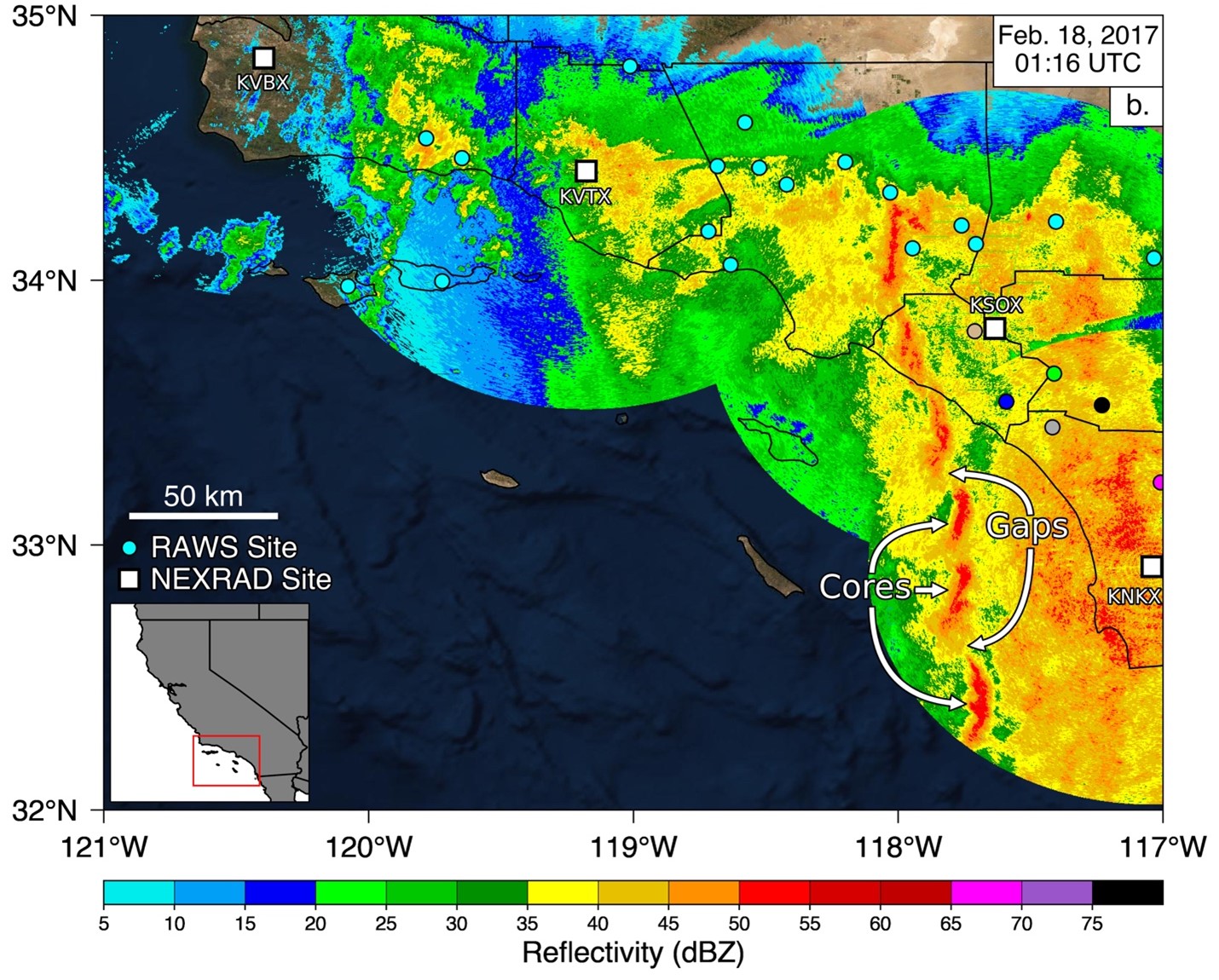