CW3E recently launched a new forecast tool using ensemble models to forecast the AR Scale. The AR scale is determined based on the duration of AR conditions (IVT >250 kg m-1 s-1) and maximum IVT during the AR as described in Ralph et al. 2019. The new tool uses ensemble members from the NCEP Global Ensemble Forecast System (GEFS) or the European Centre for Medium-Range Weather Forecasts Ensemble Prediction System (ECMWF EPS) to forecast the AR Scale for locations in the western U.S. over the next seven days. The tool illustrates the uncertainty in the timing and magnitude of AR conditions and AR scale ranking among the ensemble models. The development of the AR Scale Ensemble Forecast product was supported by California Department of Water Resources via the AR Program. NWS service has used this in developing the forecasts for the AR 5 that made landfall on 24 October 2021.

“The ensembles of the AR scale were extremely helpful for us to establish confidence in a major event coming. Seeing how many members had AR4-5 several days out gave me confidence to be more bullish on our “wet scenario” projections and to really hit the potential rain impacts during our briefings.”

The top left panel represents the integrated water vapor transport (IVT) forecast for each of the individual ensemble models (thin gray lines), the unperturbed GFS or ECMWF control forecast (black line), the ensemble mean (green line), and plus or minus one standard deviation from the ensemble mean (red line (+), blue line (-), and gray shading). Colored shading represents the AR scale forecast for the given time, shaded according to scale, calculated using the model control forecast. The bottom left panel shows the probability of AR Scale rankings at the given location calculated by the number of ensemble members predicting a given AR Scale ranking at each forecast lead time. The top right panel shows the maximum AR Scale forecast from the GFS or ECMWF control member at each grid point for the next seven days (colored dots), and the 7-day accumulated precipitation forecast from the GFS or ECMWF control forecast. The bottom right panel shows the AR Scale magnitude and timing calculated for each GEFS or ECMWF EPS ensemble member, with values representing the magnitude and timing of the maximum IVT during each forecasted AR. Gray shading in each panel represents IVT >250 (kg m-1s-1 for a duration less than 24 hours. 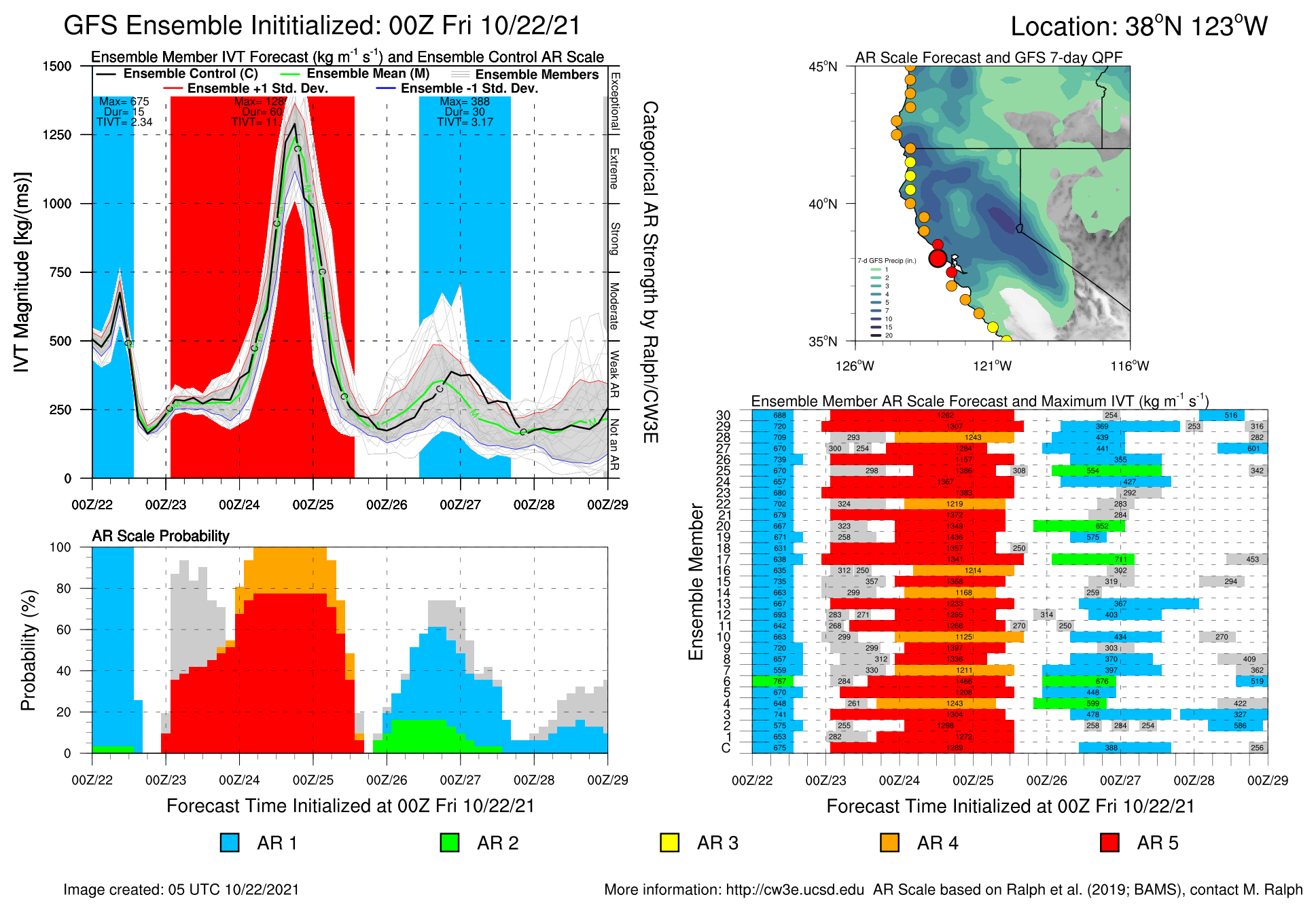 Example forecast from the GEFS initialized 00 UTC 22 October 2021 near San Francisco. This forecast showed a nearly 80% chance of an AR5 making landfall on 23-25 October.