Hamish Prince, an intern at CW3E (studying at the University of Wisconsin), recently published a paper (Prince et al., 2021) in Geophysical Research Letters along with co-authors from CW3E and JPL including Peter Gibson (now at NIWA, New Zealand), Mike DeFlorio, Thomas Corringham, Alison Cobb, Bin Guan, Marty Ralph, and Duane Waliser. This study contributes to the goals of CW3E’s 2019-2024 Strategic Plan to support Atmospheric River (AR) Research and Applications by furthering our understanding of AR dynamics.

On the Western U.S. ARs are responsible for the vast majority of flooding, with mean annual flood costs of USD$1.1 billion, 88% of the total annual flood damage. The economic impact of ARs in the Western U.S. was first examined by Corringham et al. (2019) in a benchmark study, presenting a clear exponential increase in flooding damage with increases in AR rank (intensity and duration). Building on this important work, Prince et al. (2021) identifies the genesis location and associated atmospheric dynamics of damaging ARs in the Western U.S. This study makes use of the recently developed AR tracking algorithm developed by Guan and Waliser (2019) to identify the genesis locations of ARs that make landfall on the West Coast of North America and pairs this with 40 years of daily economic flood impact, based on the methodology developed by Corringham et al. (2019). The combination of these two techniques allows for a novel assessment of atmospheric dynamics, namely AR genesis characteristics based on the economic impact observed at landfall.

When considering the most damaging ARs (exceeding the 90th percentile of damage following landfall) genesis locations display a significant shift westward, further from the coastline compared to all ARs that make landfall on the U.S. West Coast. (with median latitudes 8-27 further westward). The most damaging ARs also tend to have landfalling moisture fluxes 57%-82% greater than all other ARs (IVT increases of 224-369 kg m-1 s-1). The enhanced zonal winds that allow for propagation of ARs from further across the Pacific may themselves facilitate increased surface windspeeds and consequently increased moisture fluxes. Along-track moisture scavenging from previous cyclonic and frontal systems may intensify a migrating AR which has a distant genesis location; however, this phenomenon remains open for further interpretation.

Identifying regions of preferential genesis of damaging ARs elicits important implications for AR observation campaigns. AR Recon, which is designed to improve forecasts of both ARs that have the potential to be hazardous and those likely to be mostly beneficial, includes the geographic areas where ARs that caused damages on the US West Coast usually originate. These results reinforce the value of including the central and western North Pacific in the area covered by AR Recon (Ralph et al. 2020), which in 2021 reached as far west the dateline (Cobb et al. 2021 subm.). The study also makes a connection between the occurrence of AR families, the rapid progression of multiple ARs. ARs associated with families with recorded genesis in the West Pacific are over 3 times more likely to cause damage exceeding the 75th percentile than all other ARs with distant genesis. These results highlight the importance of antecedent conditions and begin to explore the possibility of impact-based forecasting. The results may also aid in understanding future climate AR impacts by identifying the key atmospheric drivers and specific regions of the Pacific Ocean which are of interest for impactful flooding for different landfall regions. 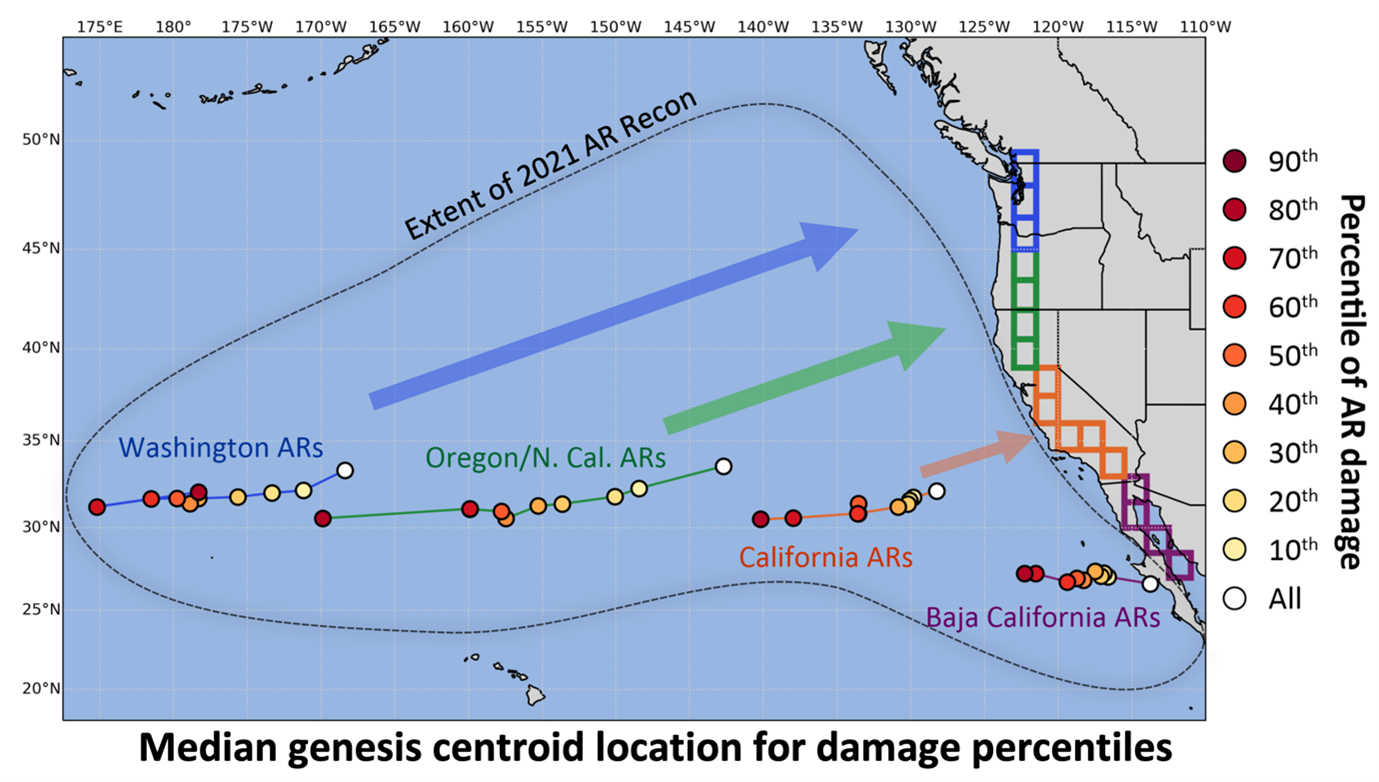