A new paper entitled “Impacts of dropsonde and satellite observations on the forecasts of two atmospheric-river-related heavy rainfall events” was recently published in Atmospheric Research and authored by National Center for Atmospheric Research scientists Wei Sun, Zhiquan Liu and Christopher Davis, and CW3E researchers F. Martin Ralph, Luca Delle Monache, and Minghua Zheng. This study (Sun et al., 2022) compares the impacts of dropsonde and satellite observations on the forecast skill of two heavy rainfall events over California during the Atmospheric River Reconnaissance (AR Recon) program in 2019. As part of CW3E’s 2019-2024 Strategic Plan, CW3E seeks to build skills in data assimilation and other emerging technologies to improve weather prediction. The work contributes to one specific goal of the Strategic Plan of improving the prediction of precipitation, ARs, and extreme events in the West through the development of data assimilation for numerical weather prediction models.

The impact of AR Recon dropsondes and satellite observations on forecasting the two AR-related heavy rainfall events was first investigated through the forecast sensitivity to observations (FSO) experiments. The FSO experiments were conducted with dropsondes, other conventional observations, and satellite radiances for both IOP3 (0000 UTC 13 February 2019) and IOP5 (0000 UTC 26 February 2019) in an adjoint-based WRFDA FSO system developed at NCAR. In both IOPs, AR Recon dropsondes show positive contributions to the forecast error reduction using the dry total energy norm metric in the downstream US West (Figure 1). In both IOPs, the accumulated contribution from dropsondes is greater than all the other conventional observation types except for the land-based soundings. In IOP3 the dropsonde contribution is comparable with each of the three satellite radiance types that are used in this study. In IOP5, the accumulated contribution of dropsondes is lower than radiance from AMSU-A and ATMS when the MHS radiance shows a negative impact on the forecast. Difference in the relative contributions of dropsondes relative to satellite data between IOP 3 and 5 can be attributable to the much greater number and spatial coverage of dropsondes and less overlap in the two observation distributions in IOP3 than in IOP5 (see Table 2 and Figure 2 in Sun et al. 2022).

To investigate the actual impact of observations on the two heavy rainfall events, eight Observing System Experiments (OSEs) were conducted for the two IOPs in this study, including Cntl (only assimilate conventional data), Drp (assimilate conventional and dropsonde data), Sat (assimilate conventional and satellite data), and DrpSat (assimilate all data) for each IOP (Table 1 of Sun et al. 2022). The model was first initialized as a 6-h forecast from 1800 UTC 12 February 2019 for IOP3, and from 1800 UTC 25 February 2019 for IOP5. For both IOPs, the highest forecast accuracy of the precipitation prediction in California is achieved when both dropsondes and satellite radiances are included in assimilation (Figure 9 in Sun et al. 2022). In IOP3, the dropsonde data slightly amplify the improvement achieved from the satellite data in terms of structure and location of the AR and attendant precipitation. In IOP5, the improvement from dropsonde data is more evident in the forecast of heavy precipitation. The influence of the dropsonde data in each case is broadly consistent with the relative coverage of dropsonde and satellite data. Further analyses on the dynamical fields show that the improved rainfall forecasts are related to the better model representation of three-dimensional circulation structure impacted by temperature. The best forecast performance acquired from the assimilation of both dropsonde and satellite data indicates the complementarity between the two data sources. 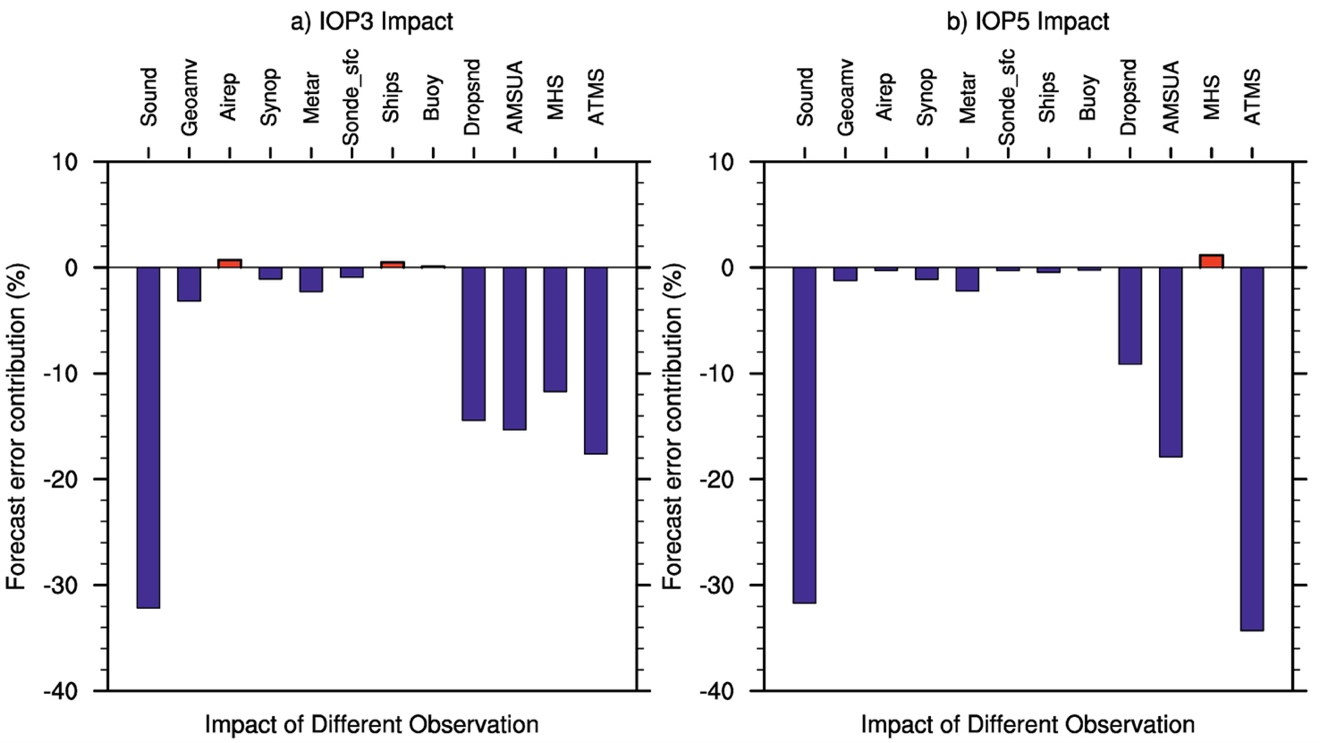 Figure 1: The averaged accumulated forecast error contribution of all used conventional observations, dropsondes, and satellite radiances in (a) IOP3 and (b) IOP5. The fraction of contribution is expressed as a percentage. The result is averaged over the 24-h, 36-h, and 48-h FSO experiments for each IOP. Figure source: from Figure 6 in Sun et al. 2022.