This study is a collaborative effort between CW3E and University of Arizona that identifies a terrain feature along the Arizona-New Mexico border just north of Mexico that is potentially important to the weather and climate of the southeast Arizona summer monsoon. The terrain feature is a “gap” that is approximately 250 km across and 1 km deep and represents the lowest terrain elevation along the 3000-km length the Continental Divide from 16-45°N. The name “Chiricahua Gap” is introduced to identify this key terrain feature, which reflects the name of a nearby mountain range in southeast Arizona and the region’s Native American history. The importance of the Chiricahua Gap is that it represents the primary pathway in which low altitude atmospheric water vapor is transported across the Continental Divide.

The paper is an example of CW3E expanding its research to examine the dynamics of the North American monsoon. Because monsoon is an important source or water for the US southwest and can cause flooding events, particularly flash floods, better understanding and improving forecasts of the North American monsoon is and important component of CW3E achieving its goal of revolutionizing the physical understanding, observations, weather predictions, of extreme events in Western North America and their impacts on floods, droughts, hydropower, ecosystems and the economy. 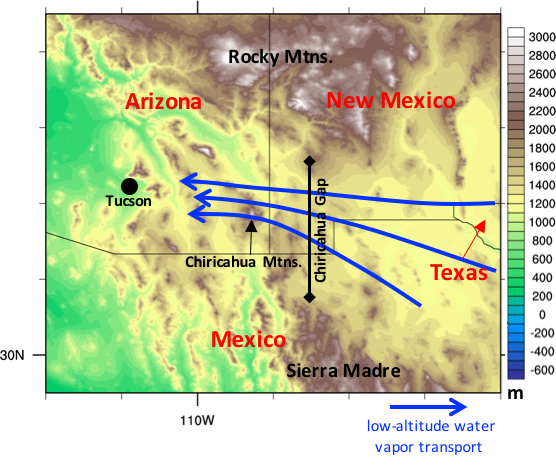 Figure 1: Terrain height (shaded in m) over Arizona, New Mexico, western Texas, and northern Mexico. Key terrain features are labeled in black. The location of Tucson, Arizona, is labeled by the black-filled circle. Low-altitude easterly water vapor transport through the Chiricahua Gap is shown by the blue arrows. This figure is modified from Fig. 1b in Ralph and Galarneau (2017).