CW3E collaborator Dr. Dennis Lettenmaier and his group at UCLA, along with CW3E director F. Martin Ralph, recently published a paper in the Journal of Hydrometeorology titled “The role of hydrological initial conditions on Atmospheric River floods in the Russian River basin”. This article is now available at https://journals.ametsoc.org/doi/abs/10.1175/JHM-D-19-0030.1

Recent studies suggest that observed changes in extreme precipitation associated with a general warming of the Western U.S. have not necessarily led to corresponding changes in floods, and changes in antecedent hydrological conditions could be a primary missing link. They examined the effect of observed warming on antecedent soil moisture (ASM) for the period 1950-2017. They first constructed an hourly precipitation product at 1/32o spatial resolution for the Russian River basin (see Figure 1b for precipitation gauge locations). They used the Distributed Hydrology-Soil-Vegetation Model (DHSVM) to estimate storm total runoff volumes and soil moisture.

Figure 1: a) Study domain, with locations of USGS stream gauges and Hydrometeorolgy Testbed (HMT) soil moisture observation sites shown, and b) precipitation gauge locations. The 15-km buffer for the precipitation gauges selection is shown in gray dashed line in b).

They found that up to 95% of Peaks Over Threshold (POT) extreme discharge events were associated with ARs. The storm runoff-precipitation ratio generally increased with wetter pre-storm conditions, and the relationship was stronger as drainage area increased. They found no trends in extreme precipitation but weak downward trends in extreme discharge. The latter were mostly consistent with weak downward trends in the first 2-day storm precipitation (see Figure 2 for example). They found no trends in ASM, however, ASM was significantly correlated with peak flow. The ASM was affected more by antecedent precipitation than evapotranspiration and hence temperature increases had weak effects on ASM. 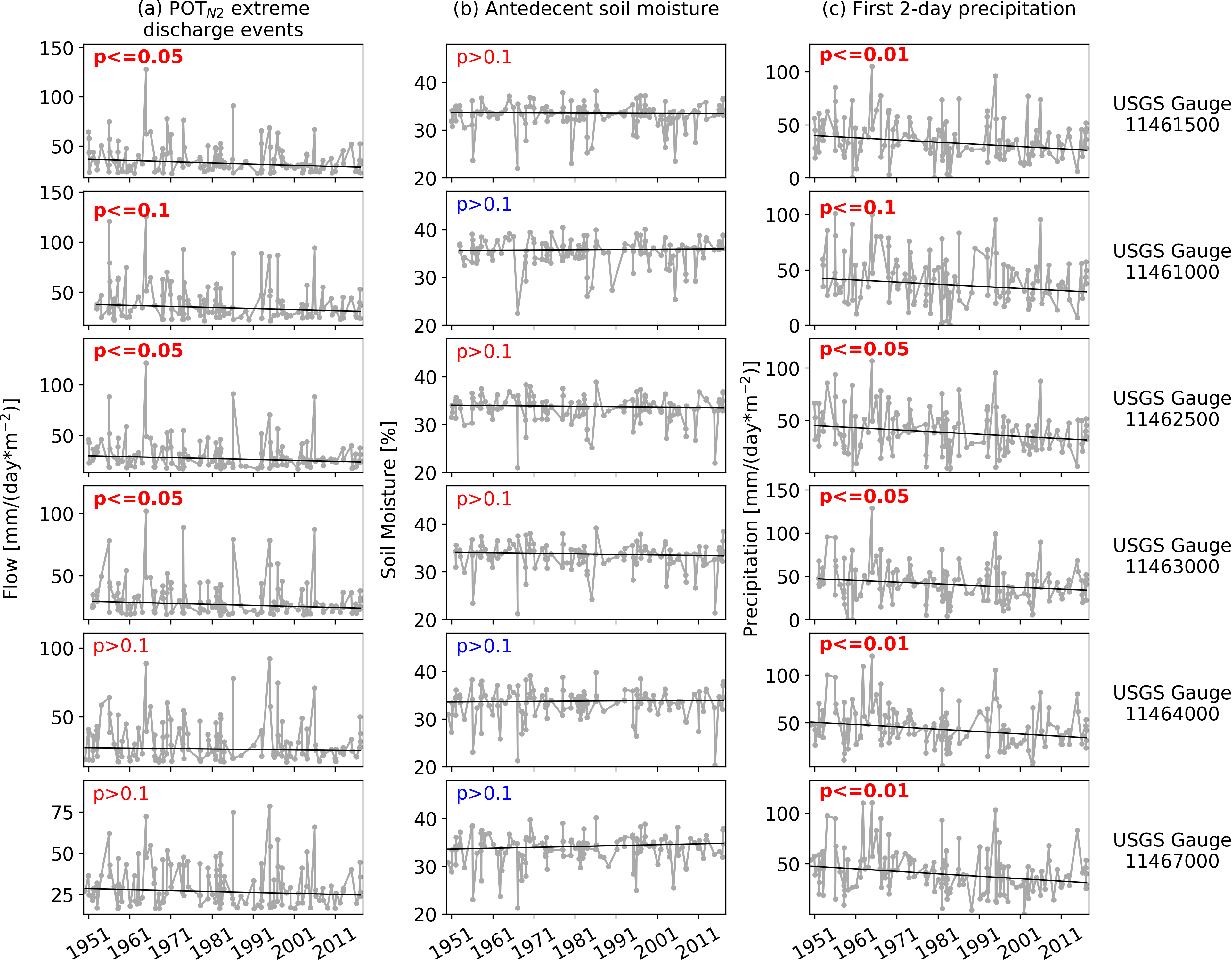 Ralph et al. (2019) examined the relationship between the AR scale and major flooding at the USGS Gauge 11467000 (Russian River near Guerneville) (see Table 5 in their paper). They found that 6 out of 10 AR events in the highest category (in terms of IVT intensity and AR duration) were associated with major flooding during 1980-2017. They hypothesized that the three that did not lead to major flooding (one occurred when streamflow data were not available) were related to dry soils. This study here showed that the ASM values were less than 20% (volumetric water content expressed as %) for these three events, which corroborates the hypothesis of Ralph et al. Furthermore, 5 out of the 6 AR events that led to flooding had ASM values greater than 32%. The remaining one was the smallest flood event among the six, with an ASM of 22%.

The research supported herein was funded by the CW3E at the Scripps Institution of Oceanography via a grant from the California Department of Water Resources, with Dr. Ralph serving as Principal Investigator.