Beginning on January 19th with a dry run for forecast and flight planning operations, CW3E director Marty Ralph has been leading the Atmospheric River Reconnaissance (AR Recon; http://ucsdnews.ucsd.edu/feature/hunting-atmospheric-rivers) 2018 campaign, in close collaboration with Co-PI Vijay Tallapragada of the National Center for Environmental Prediction (NCEP) and Jim Doyle of the Naval Research Laboratory (NRL). AR Recon 2018 supports improved prediction of landfalling atmospheric rivers on the US west coast, which is a type of storm that is key to the region’s precipitation, flooding and water supply (e.g., Ralph et al. 2012, 2013, 2016; Dettinger et al. 2011; Neiman et al. 2011). Forecasts of landfalling ARs are key to precipitation prediction and yet are in error by +/- 400 km at even just 3-days lead time (Wick et al., 2013). The concept for AR Recon was first recommended in a report to the Western States Water Council that was prepared by a broad cross-disciplinary group in 2013 (Ralph et al. 2014).

Key sponsors are the U.S. Army Corps of Engineers and the CA Department of Water Resources, who are working with CW3E and other partners to advance their goals of using improved AR prediction to inform water and infrastructure management (e.g. FIRO, CW3E AR Monitoring, Analysis and Prediction System). This campaign has been conducted with participation of experts on midlatitude dynamics, atmospheric rivers, airborne reconnaissance, and numerical modeling, who have come together from organizations including CW3E at UC San Diego’s Scripps Institution of Oceanography, NOAA (NWS’ NCEP and Western Region, OMAO/Aircraft Operations Center), NRL, the Air Force 53rd Weather Reconnaissance Squadron, Plymouth State Univ., the National Center for Atmospheric Research, U Albany, U Arizona, and the European Centre for Medium-Range Weather Forecasts (ECMWF), and have participated in daily forecasting and flight planning discussions. The team and its efforts for the first Intensive Observing Period (IOP) are summarized in Fig. 1. 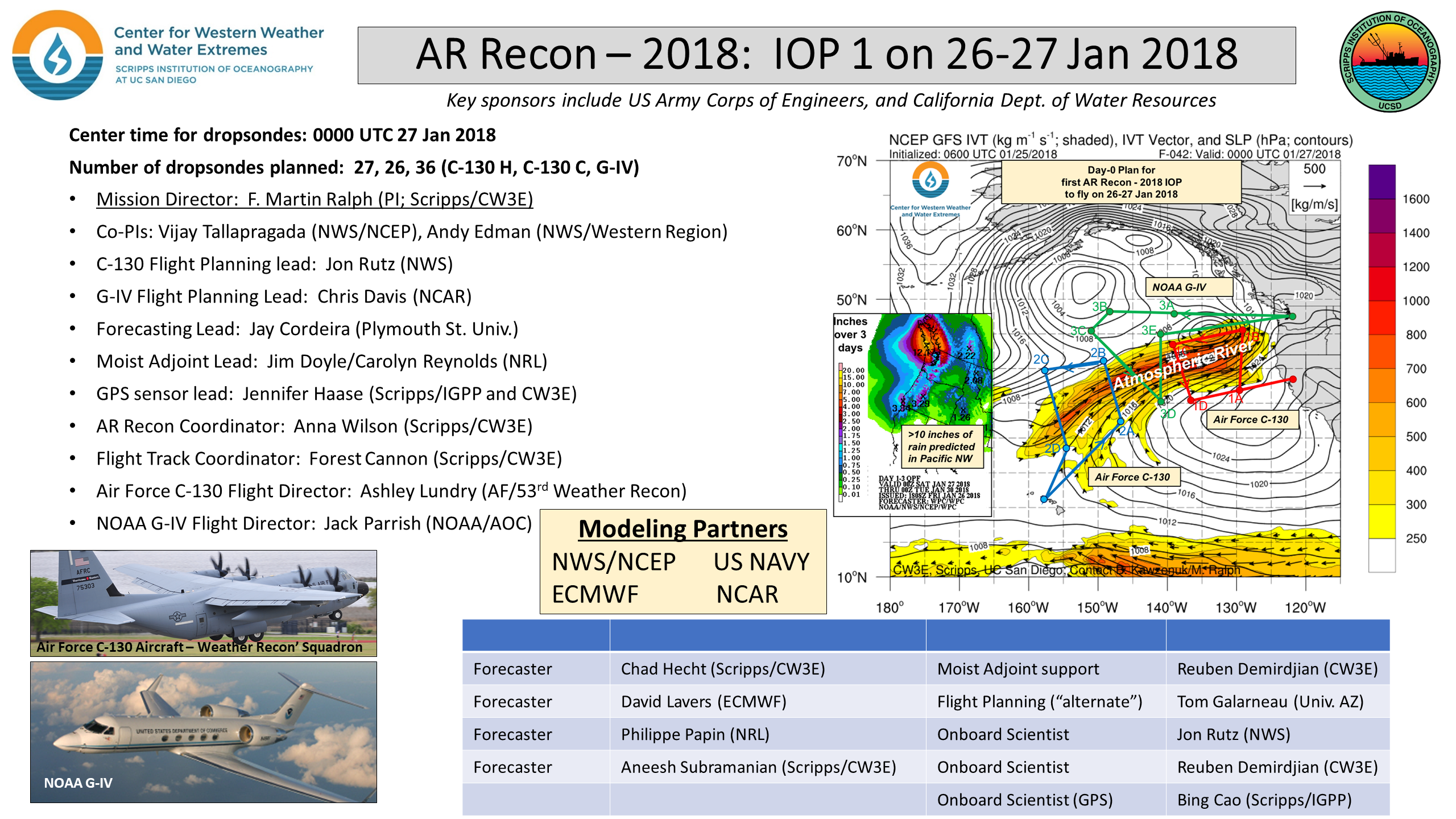 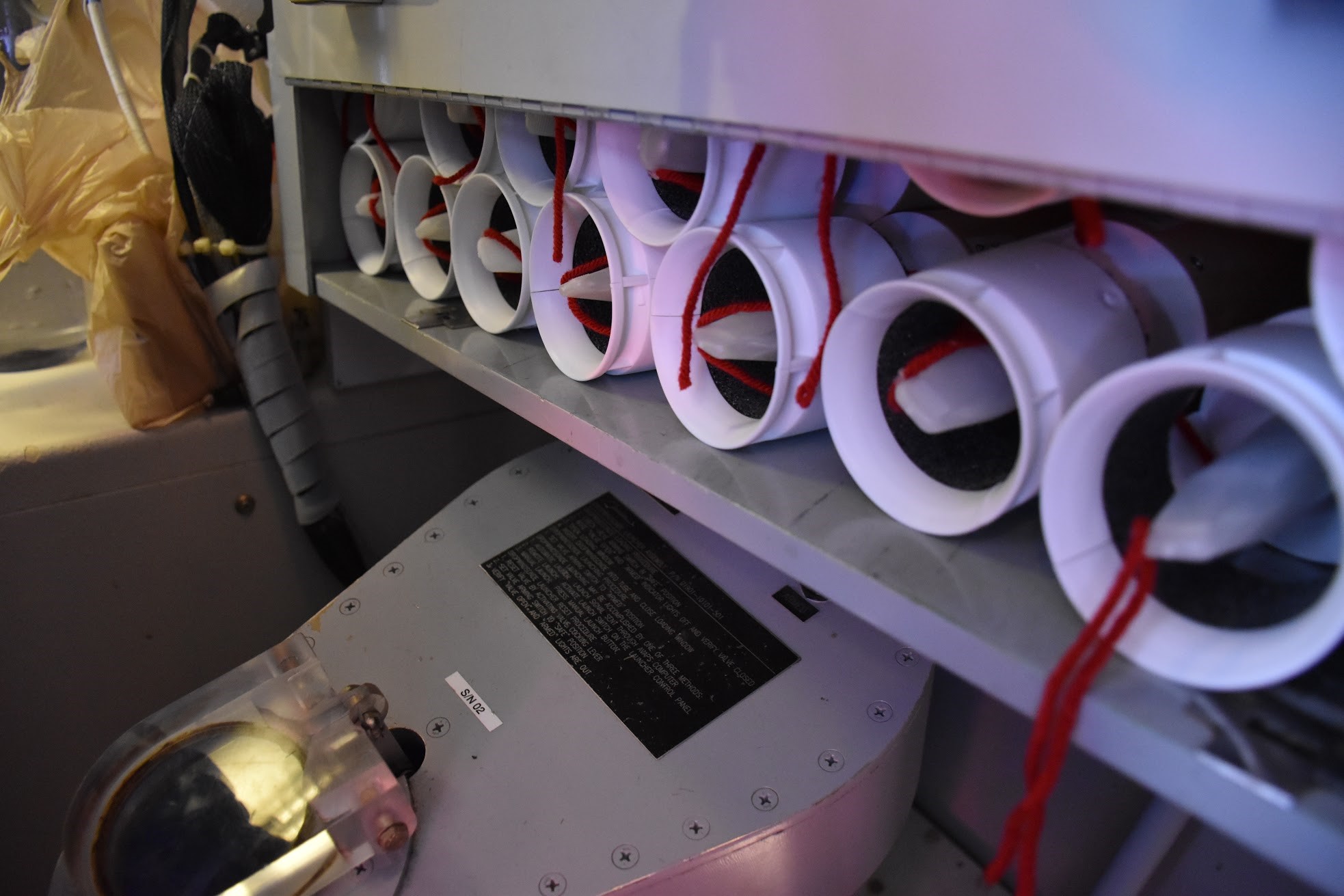 Fig. 2. Dropsondes on the NOAA G-IV aircraft before getting released through the chute (below left). Each dropsonde is about the size of two soda cans. Photo courtesy Dr. Brian Henn.

Three aircraft that are normally used for hurricane reconnaissance are being deployed for atmospheric river reconnaissance this winter. The data are being incorporated by global modeling centers. The flights are conducted over the Northeast Pacific to collect observations to support improved AR forecasts. These aircraft include two of the Air Force 53rd Weather Reconnaissance Squadron’s WC-130J Hurricane Hunter aircraft, one based in Hawaii and the other in California, and NOAA’s Gulfstream IV (G-IV), based in Everett, WA. Air Force personnel have been stationed at Scripps to help coordinate flight planning. The primary data collected are from the release of dropsondes (Fig. 2), which record temperature, wind, and relative humidity at very high resolution throughout the atmosphere. Dr. Jennifer Haase and postdocs Michael Murphy and Bing Cao flew additional instrumentation aboard the NOAA G-IV to characterize the upper atmosphere poleward of the atmospheric rivers. A simplified version of the GNSS Instrument System for Multistatic and Occultation Sensing (GISMOS) was used to measure profiles of the atmospheric environment to the sides of the aircraft while dropsondes measure profiles directly below the aircraft. The data will be analyzed after the campaign to investigate whether temperature variations not captured in the numerical weather models had an impact on storm development.

To date, four missions have been flown (Fig. 3), and a total of 306 successful dropsonde releases were completed. Three of these missions included all three aircraft, and one included the two C-130s without the G-IV. Flights were all centered at 0000Z, with drops occurring in the +/- 3 hour time window, so that the data the aircraft gathered could be assimilated into operational numerical weather prediction models, including NWS’ Global Forecast System (GFS), ECMWF, and NRL’s Coupled Ocean/Atmosphere Mesoscale Prediction System (COAMPS). 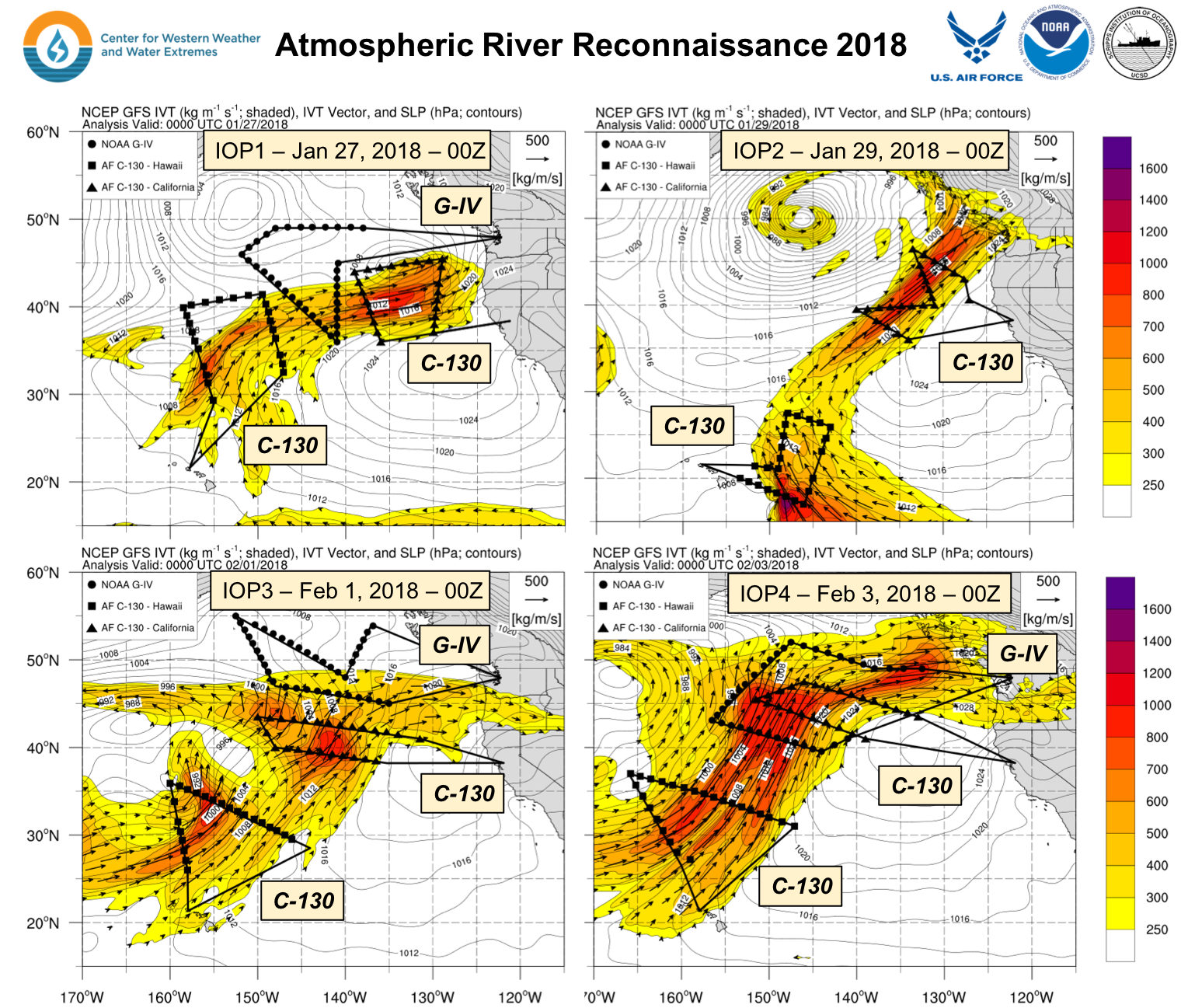 ARRecon-2018 is making use of an exciting tool developed by the NRL (Doyle et al., 2012), a moist adjoint model that pinpoints location of greatest sensitivity in the forecast – which is centered typically on the atmospheric river core. This moisture sensitivity is substantially larger than temperature, wind, or any other sensitivity. The field campaign is refining how the tool works, and that information is being combined with knowledge of dynamically significant meteorological features such as the upper-level jet, cold-air troughs and other features to specify each mission’s detailed flight tracks. These inputs were developed through group discussions such as is pictured (Fig. 4) on 25 January 2018. The dropsonde data collected in these targeted locations in the otherwise data sparse ocean may be part of the solution to getting atmospheric river forecasts right. Analysis of the impact of the data will be carried out over the next couple of years to thoroughly assess this, including development of specialized assimilation methods. Not only will these data be assimilated into operational forecast models, but the information collected will be used in research studies to further understand the dynamics and processes that are the main drivers of key atmospheric river characteristics such as strength, position, length, orientation, and duration. 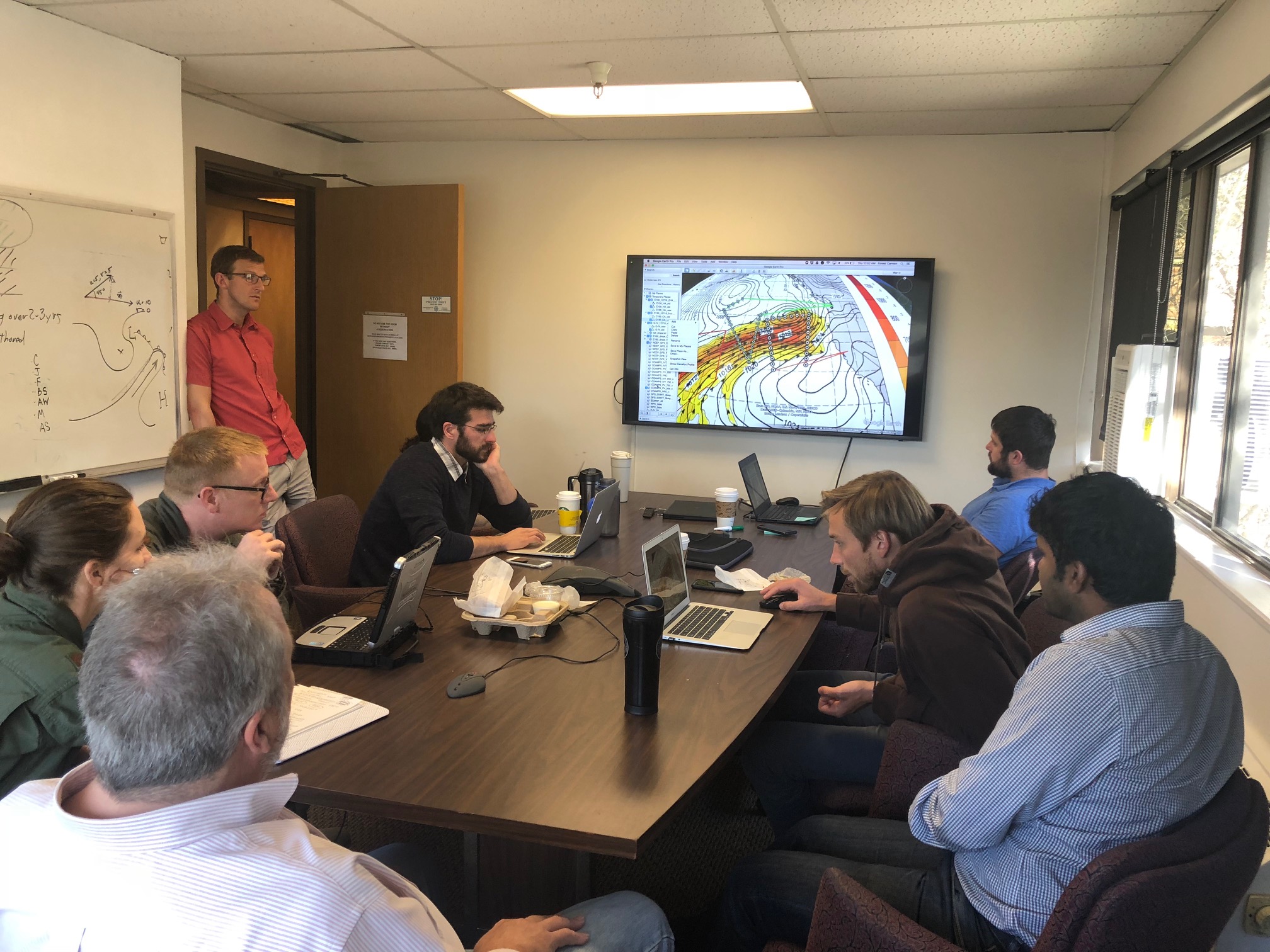 Photos from IOP 4 illustrate the experience of a flight on the NOAA G-IV (Fig. 5). 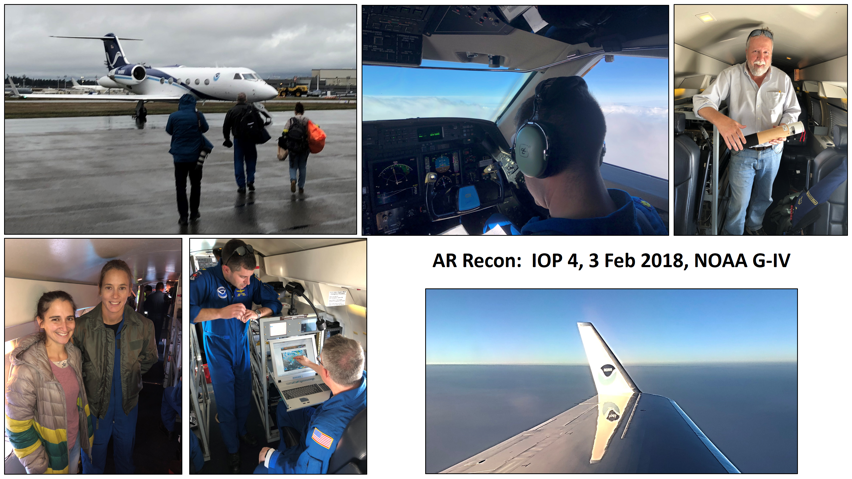 While the NOAA G-IV has completed its mission in the west for this year, there are still two more storms to be sampled by the C-130s through the end of February 2018. Stay tuned for more information on those missions!