Atmospheric rivers are narrow bands of moisture-laden air, often more than a thousand miles long and a few hundred miles wide, that affect precipitation around the world. Forecasting their impact is especially important in the western United States where they can account for up to 50% of total annual rainfall. They bring significant benefits, such as filling reservoirs and contributing to Sierra snowpack, but can also lead to catastrophic floods and landslides.

To gain a better understanding of atmospheric rivers, the Center for Western Weather and Water Extremes (CW3E) at Scripps Institution of Oceanography, in collaboration with the San Diego Supercomputer Center (SDSC), both located at UC San Diego, developed an unprecedented forecasting system based on a large collection of atmospheric simulations. Based on initial conditions, dynamic models and physics this collection of calculations – called an ensemble forecast – is a novel and innovative element of CW3E’s work to increase the skill of predicting the timing and magnitude and associated uncertainty of extreme precipitation events, primarily focused on atmospheric rivers.

With a goal to reliably quantify the forecast uncertainty, improve overall quality of probabilistic predictions, and better sample the distribution of extreme events, the new West-Weather Research and Forecasting (West-WRF) Near Real-Time (NRT) 200-Member Ensemble, CW3E relied on the Comet supercomputer at SDSC to supply the computing power, which has a peak performance of nearly three quadrillion operations per second. This capacity was needed to complete the ensemble’s nightly data runs in less than 10 hours, per the operational requirements of CW3E’s Atmospheric River Reconnaissance (AR Recon) Program, which improves forecasts of precipitation for water management decisions by targeting airborne observations in and around atmospheric rivers and utilizing buoy observations over the Northeast Pacific. The goal of AR Recon is to improve forecasts of the landfall and impacts of atmospheric rivers on the U.S. West Coast at lead times of one to five days.

The ensemble calculations used 1,200 Comet compute nodes to accelerate the runs, while still leaving over 700 compute nodes for other ongoing research at CW3E. It included 100 unique combinations of physics models, boundary conditions, and applied perturbations based on the stochastic kinetic energy backscatter scheme (SKEBS). The models covered a domain that ranged from the southwest of Hawaii to the western states of California, Oregon, Washington, Idaho, Nevada and Arizona, to southern Alaska. Through careful planning by CW3E and SDSC, researchers attained a 94% success rate of ensemble members finishing in time to support CW3E’s AR Recon.

Early results from ongoing analysis of the data shows the ensemble design achieved the project objectives. CW3E researchers are working to expand upon the current decision-support forecast products. The new products will address the challenges of probabilistic uncertainty in a format that is easier to understand and incorporate into decision-making. Researchers from

CW3E and SDSC are collaborating on a project to improve the performance and stability of the ensemble and expect performance increases.

With the success of the West-WRF-NRT 200-member ensemble, CW3E is exploring how to further improve the system design and performance during the 2022-2023 water season. 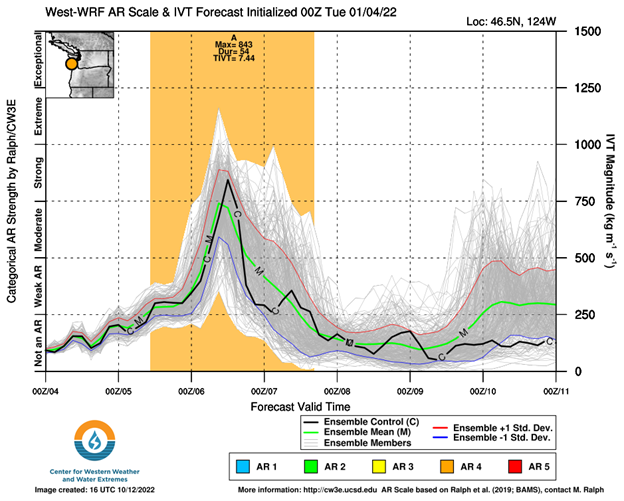 This work used the Comet supercomputer, which was made available by the Atmospheric River Program Phase 2 and 3 supported by the California Department of Water Resources (awards 4600013361 and 4600014294 respectively) and the Forecast Informed Reservoir Operations Program supported by the U.S. Army Corps of Engineers Engineer Research and Development Center (award USACE W912HZ-15-2-0019).

Inquiries should be directed to Daniel Steinhoff, Luca Delle Monache, or Patrick Mulrooney.