On May 19-20, CW3E, in collaboration with several federal entities and non-governmental organizations, organized and hosted a virtual post-fire science symposium as part of an ongoing workshop series called After the Flames (Fig 1). Though there are numerous considerations post-fire, the primary discussions during this conference related to hazards such as flash floods and debris flows on burn areas. Debris flows are one of the main focus areas in the California Department of Water Resources Atmospheric River Program at CW3E; researchers are working towards improved understanding and forecasting of short-duration, high-intensity rainfall capable of triggering flash floods and debris flows on recently burned areas. 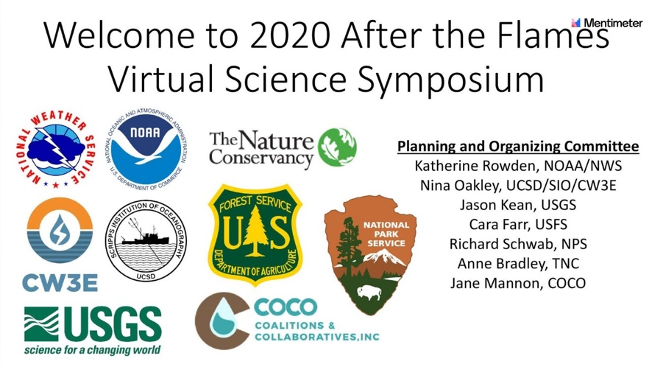 Figure 1. Introductory slide for meeting with organizer names and affiliations.

This virtual symposium evolved out of a session that was to be part of a multi-day conference scheduled in early April but canceled due to COVID-19. The organizers recognized a need in the post-fire community to take time to connect, share ideas, and discuss pathways forward, especially in the midst of a global pandemic and preceding the onset of the western US wildfire season.

The goals of the workshop were to:

The workshop targeted both researchers and practitioners of post-fire science. Though there are numerous considerations post-fire, the primary discussions during this conference related to hazards such as flash floods and debris flows on burn areas. At the height of attendance, approximately 250 people were tuned in. Attendees consisted primarily of researchers and practitioners at federal agencies (53%). The next largest representation was state agencies (14%), followed by NGOs (10%) and university/education (10%); Fig 2. 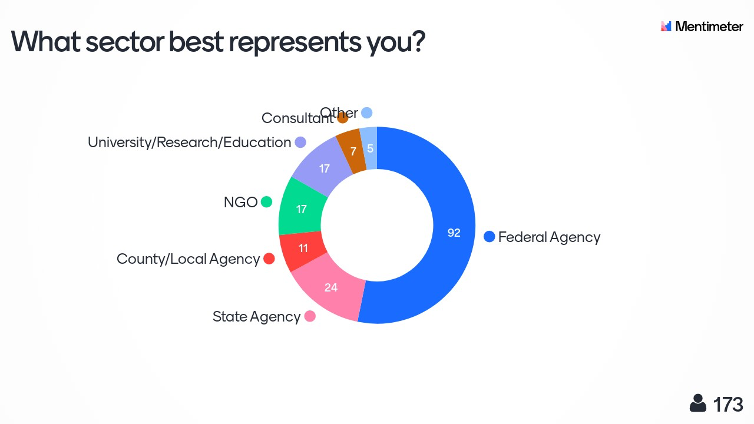 Day 1 of the workshop featured an introductory presentation on advancements in post-fire science by Jeremy Lancaster at the California Geological Survey. This was followed by a panel discussion in which seven practitioners shared their science needs and suggestions for moving forward. Day 1 wrapped up with polling the audience on various aspects of science needs using Mentimeter, an interactive polling software. With a large number of attendees, it was not feasible to have participation as in an in-person conference (e.g., asking questions, breakout groups). The Mentimeter software allowed for audience feedback and participation in the absence of verbal communication. 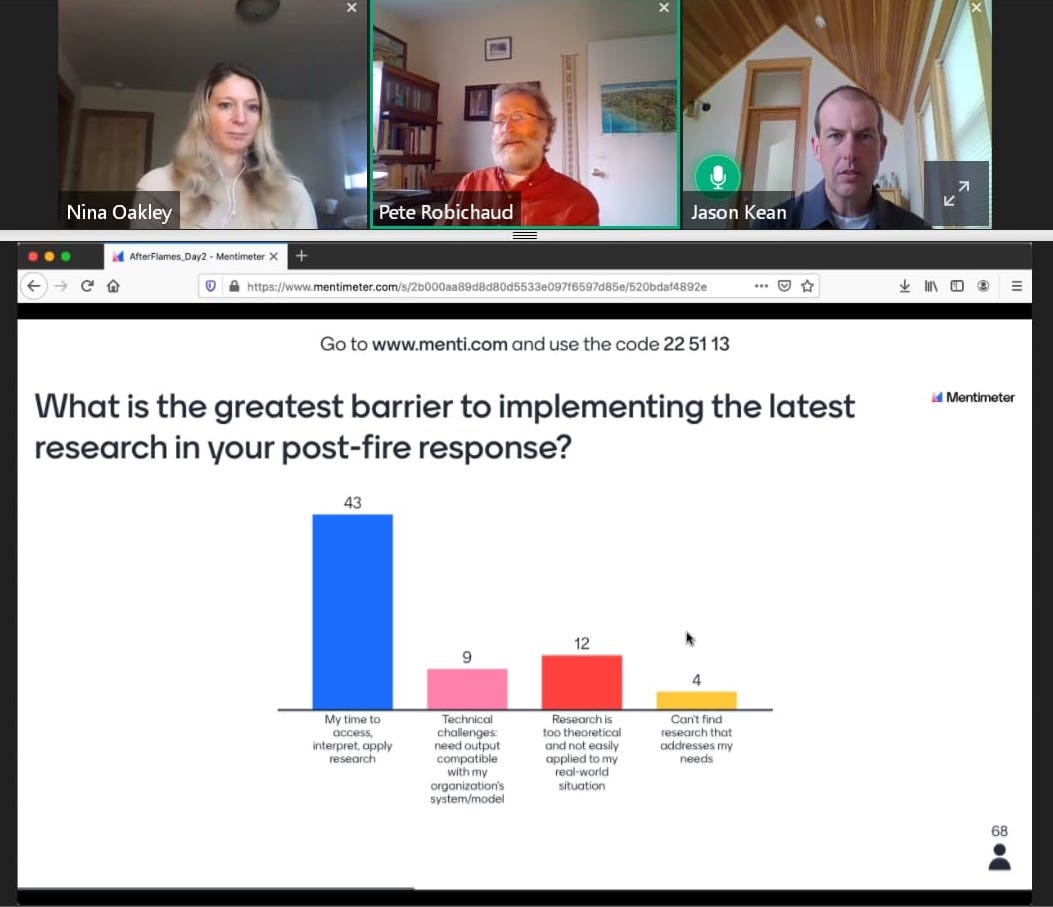 Day 2 of the workshop focused on science research and pathways for moving forward in post-fire response. The day began with a panel of research scientists in post-fire hydrology, meteorology, and social science who discussed the current cutting edge in their fields, opportunities and limitations to scientific progress, and communication efforts. This was followed by a Mentimeter polling exercise on future research avenues and barriers to use of research by practitioners. The day continued with a presentation by Troy Timmons (Western Governors’ Association) and Mike Zupko (Wildland Fire Leadership Council) on initiatives for post-fire response from their organization. Lastly, Anne Bradley (The Nature Conservancy) and Cara Farr (US Forest Service) discussed other networks and collaborative efforts addressing post-fire issues. 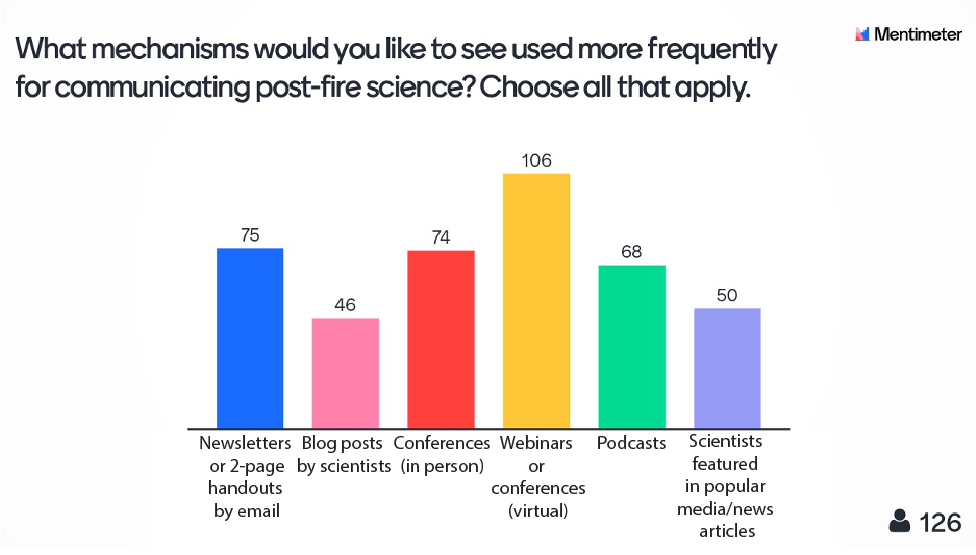 Figure 4. Audience responses to the above question in Mentimeter poll. There were 126 responses and attendees could choose multiple options.

Some of the preliminary insights and takeaways from the conference:

A full report summarizing the conference, findings from polling activities and next steps is forthcoming. One of the priority areas in CW3E’s Strategic Plan is Atmospheric River Research and Applications, which includes the production of decision support tools that meet the needs of western US forecasters, resource managers, and emergency managers. Post-fire debris flows in Southern California often occur during atmospheric river conditions (though triggered by finer scale convective features within the atmospheric river system; Oakley et al. 2017). Participating in this conference gave CW3E researchers an opportunity to hear the perspectives of practitioners managing post-fire debris flow hazards. This information subsequently influences research priorities and characteristics of information produced and tools developed. Additionally, valuable connections were built between CW3E and co-hosting agencies and participants that will facilitate future collaborations in addressing post-fire debris flow hazards. 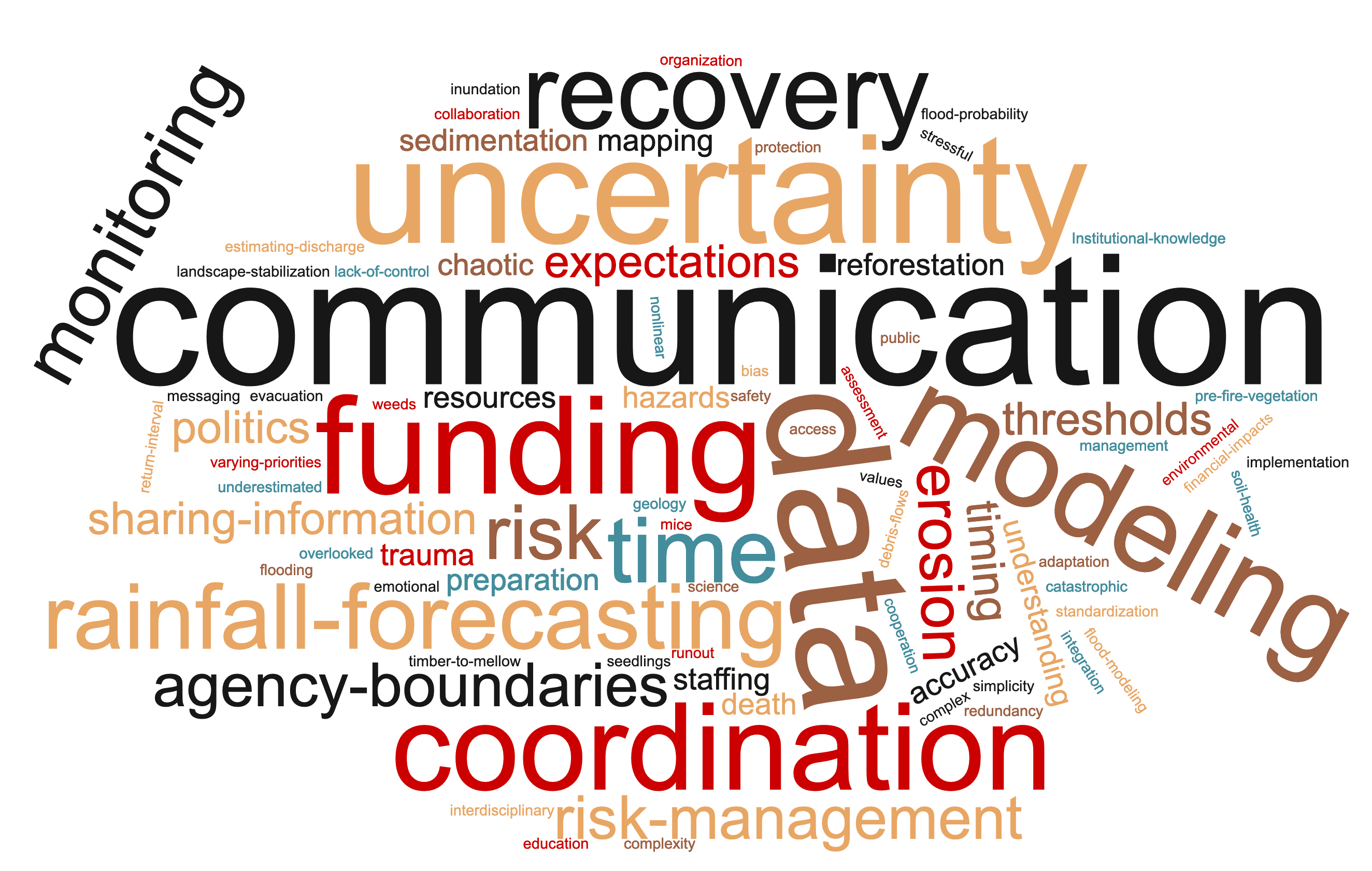 Figure 5. Word cloud featuring responses to the prompt: What three words or phrases describe your post-fire challenges? Larger word size indicates a greater frequency of the word in responses. This word cloud incorporates 111 attendee responses and has been post-processed to combine similar words.

Recordings of the virtual symposium and slides featuring all polling results are available here: https://aftertheflames.com/science-session-resources/.

Nina Oakley’s participation in this conference was supported by the NOAA/NWS CSTAR Program and the California Department of Water Resources Atmospheric River Program.