Data Gaps within Atmospheric Rivers over the Northeastern Pacific

CW3E data assimilation researcher, Minghua Zheng, along with other researchers from CW3E (Luca Delle Monache, F. Martin Ralph, Anna W. Wilson, and Forest Cannon), NOAA/NCEP/EMC (Xingren Wu and Vijay Tallapragada), Scripps (Bruce Cornuelle, Jennifer S. Haase, and Matthew Mazloff), and the University of Colorado at Boulder (Aneesh Subramanian), published a paper in Bulletin of the American Meteorological Society, titled “Data Gaps within Atmospheric Rivers over the Northeastern Pacific” (Zheng et al. 2020). As part of CW3E’s 2019-2024 Strategic Plan to support Atmospheric River Research and Applications, CW3E seeks to enhance global AR monitoring through a transformative modernization of atmospheric measurements over the Pacific and in the western United States. In particular, this study assesses the data availability within ARs over the northeastern Pacific based on the observations assimilated by the NCEP operational GFS. It found that a significant data void exists in the lower atmosphere during AR events over the northeastern Pacific. When available, AR Reconnaissance (Recon) data provide the majority of direct observations within oceanic ARs. This study is a fundamental step to inform future AR Recon targeting plans and data denial experiments by assessing how AR Recon data are augmenting the existing observation network. Ultimately, this work supports ongoing collaborations involving CW3E, NOAA, NRL, U.S. Army Corps of Engineers, NCAR, and ECMWF.

In this work, the available observations for ARs are partitioned into non-radiance data and radiance data. Non-radiance data include conventional observations, GPS Radio Occultation (RO), satellite derived winds (SATWND), scatterometer ocean surface winds, and radar vertical azimuth display (VAD) wind profile. Radiance data include all the satellite radiance types assimilated by GFS. The radiance data are further grouped into clear-sky radiances and all-sky radiances. A data gap exists from near the surface to middle troposphere, where most of the water vapor transport is concentrated within an AR object (Figure 1a). Most conventional observations are primarily land based and unavailable over the Pacific Ocean. Satellite derived winds are mainly usable in the upper troposphere due to the presence of upper-level clouds associated with ARs. Commercial aircraft typically do not fly in the lower to middle troposphere. AR Recon dropsonde data can largely fill the observation gaps from near the surface to the middle troposphere (Figure 1b), where they contribute 76.8% of the direct temperature, 99.9% of the humidity, and 48.0% of the wind observations in an AR object (see Table 4 in Zheng et al. 2020). The all-sky radiance data typically under-samples the vertical structure between 400 and 900 hPa, and clear-sky radiance data are unavailable from the surface to 300 hPa (Figure 1c). Furthermore, all-sky microwave radiances are often either rejected over precipitating areas or assigned small weights during assimilation by the model (see Figures 11-12 in Zheng et al. 2020). Dropsondes add critical details about the vertical properties of stability and saturation in this region that often impact cyclogenesis (Figures 1c-d).

AR Recon dropsondes and supplemental drifting buoys and airborne RO data are not only filling the observation gap in the lower to middle levels within and above an AR, but also provide high-quality wind and moisture data over the highest wind- and moisture-sensitive regions where initial errors will most likely trigger forecast errors in the landfalling ARs and the associated precipitation over the western U.S. (Figure 2). 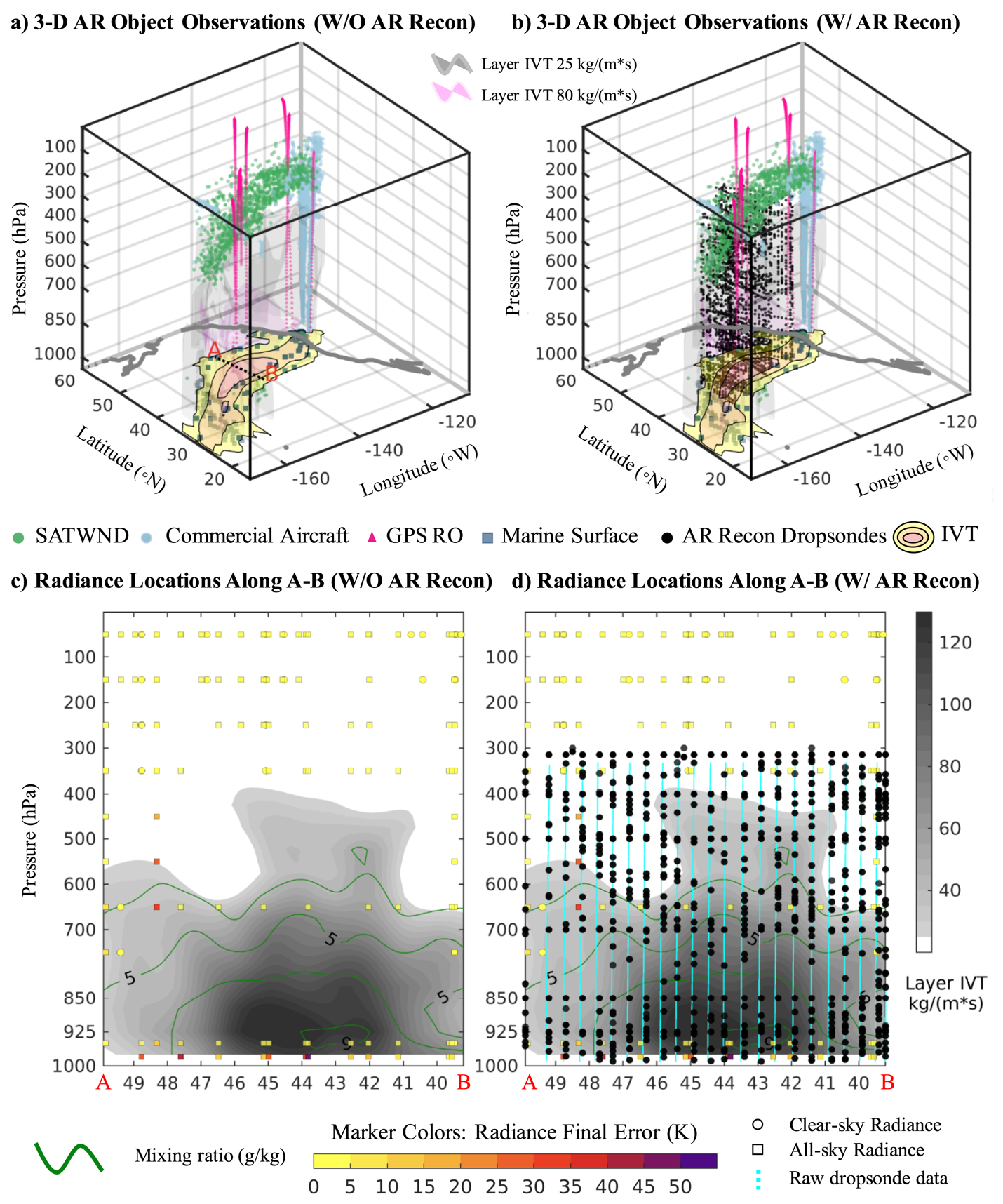 Figure 1. (Figure 13 in Zheng et al. 2020) Three-dimensional illustration of observation distributions for non-radiance data (a) without and (b) with AR Recon flight-level and dropsonde data (black filled circles); (c-d) are the radiance locations (colored markers) and their final errors (colors on each marker) along a flight path A-B (c) without and (d) with AR Recon dropsondes. The cyan dots on panel (d) are the raw dropsonde observations. The black dots are the AR Recon flight-level and dropsonde data used in the operational GFS. The coordinates for A and B are (49.9oN, 144oW) and (39.2oN, 141.4oW). This figure is based on the observations for 2016IOP1. The grey and pink shaded on (a-b) are the isosurface for 50?h (25 kg m-1 s-1) and 95?h (80 kg m-1 s-1) layer IVT values, respectively. The surface shades with black contours are for the total IVT value starting from 250 kg m-1 s-1 with an increment of 250. 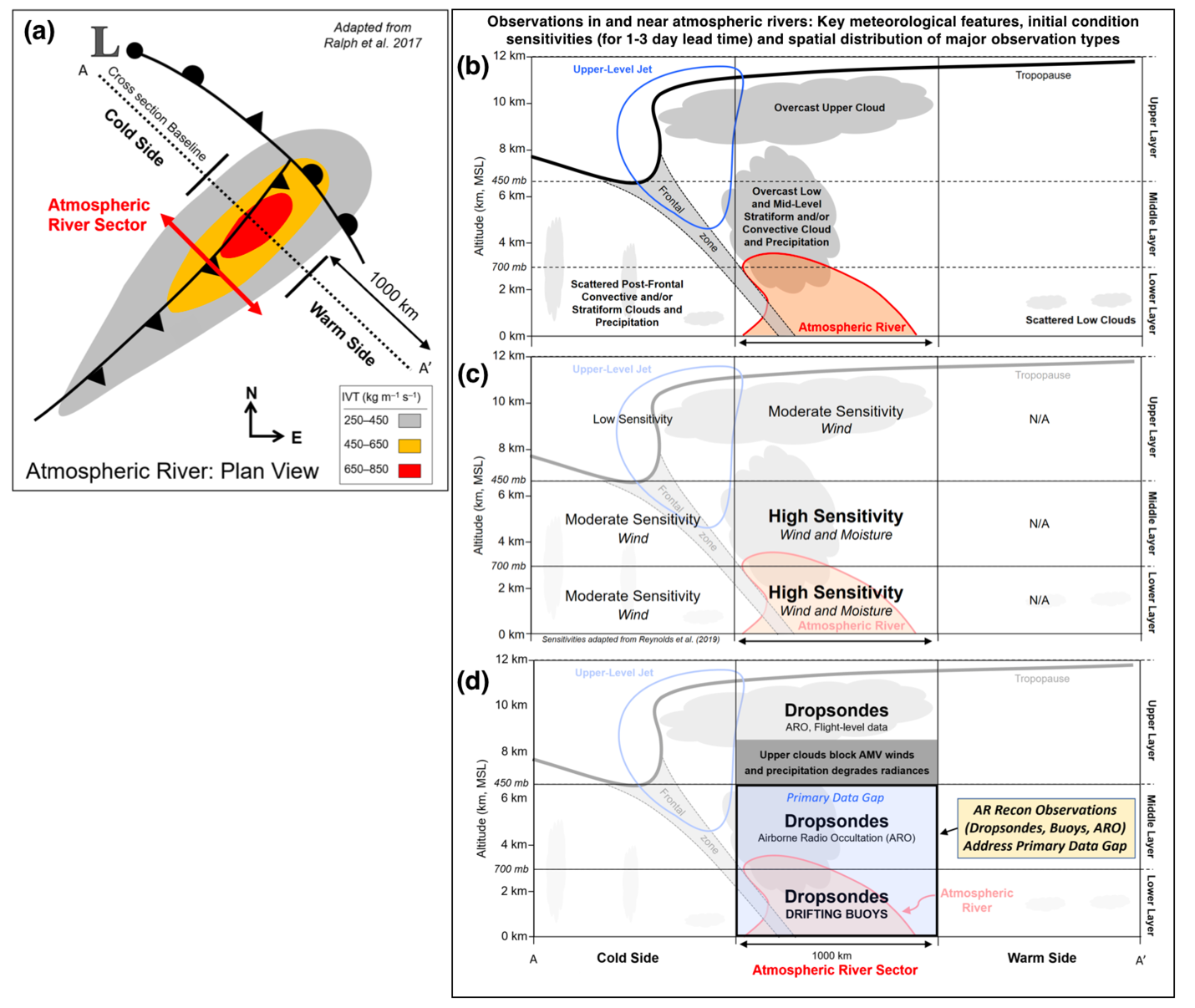 Figure 2. (Figure 14 in Zheng et al. 2020) A schematic summary of the AR Recon observations relative to key meteorological features and structure of an AR over the northeastern Pacific Ocean, and the adjoint sensitivity of West Coast landfalling ARs to initial condition winds and moisture 1-2 days ahead. Panel (a) a plan-view representation of the AR and the surrounding meteorological features. IVT amplitude is shown by color fill (kg m-1 s-1) with IVT exceeding 250 kg m-1 s-1 in grey indicating the AR boundaries. The position of the cross section shown in (b)-(d) is denoted by the dashed line A–B. (b) Vertical cross-section of key meteorological features in and near an AR over the northeastern Pacific Ocean. Panels (a)-(b) are adapted from Ralph et al. (2017). © American Meteorological Society. Used with permission. (c) Adjoint sensitivity of forecasts of West Coast landfalling ARs at 1-2 days lead time to initial condition errors in wind and moisture offshore summarized from Reynolds et al. (2019). The background is same with (b). (d) The distributions of AR Recon observations over the northeastern Pacific Ocean during AR conditions. The supplemental buoys and ARO data so far have not been assimilated by GFS/GDAS.