Atmospheric rivers (ARs) are elongated strands of horizontal water vapor transport, accounting for over 90% of the poleward water vapor transport across midlatitudes. ARs have important implications for extreme precipitation when they make landfall, particularly along the west coasts of many midlatitude continents (e.g., North America, South America, and West Europe) due to orographic lifting. ARs are important contributors to extreme weather and precipitation events, and while their presence can contribute to beneficial rainfall and snowfall, which can mitigate droughts, they can also lead to flooding and extreme winds. This study takes a uniform, global approach that is used to quantify how ARs change between Coupled Model Intercomparison Project Phase 5 (CMIP5) historical simulations and future projections under the Representative Concentration Pathway (RCP) 4.5 and RCP8.5 warming scenarios globally. The projections indicate that while there will be ~10% fewer ARs in the future, the ARs will be ~25% longer, ~25% wider, and exhibit stronger integrated water vapor transports under RCP8.5 (Figure 1). These changes result in pronounced increases in the frequency (integrated water vapor transport strength) of AR conditions under RCP8.5: ~50% (25%) globally, ~50% (20%) in the northern midlatitudes, and ~60% (20%) in the southern midlatitudes (Figure 2). 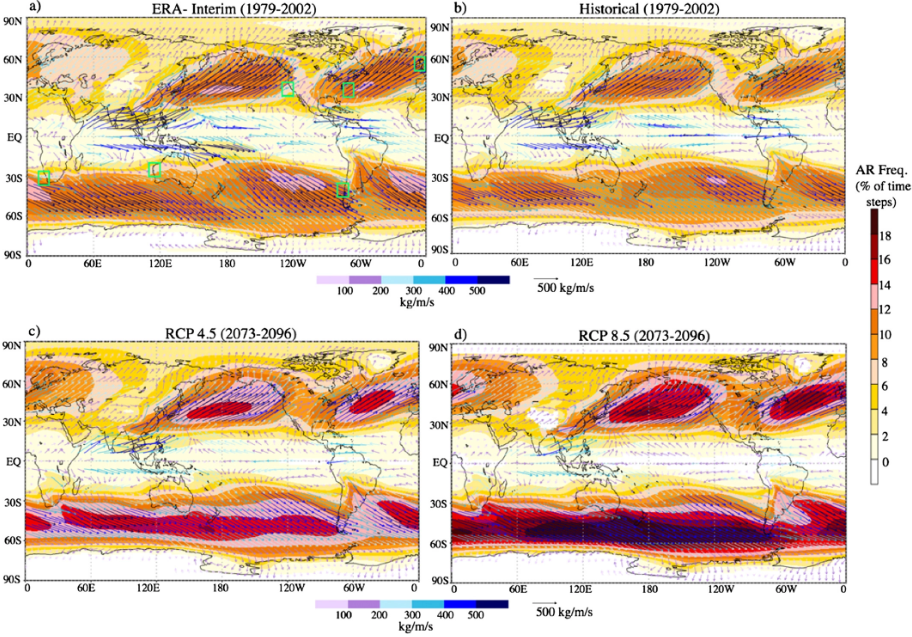 This research was supported by the NASA Energy and Water cycle Study (NEWS) program. Vicky Espinoza’s contribution to this study was made possible by NASA Jet Propulsion Laboratory’s Year-Round Internship Program during her graduate studies at the University of Southern California. Please contact Duane Waliser at duane.waliser@jpl.nasa.gov with inquiries. More information can be found from the NASA website https://www.jpl.nasa.gov/news/news.php?feature=7141.