CW3E affiliate Professor Jay Cordeira of Plymouth State University (PSU), along with co-authors Jon Stock and Mike Dettinger of the USGS, Allison Young of PSU, Julie Kalansky and Marty Ralph of CW3E, published a paper in the Bulletin of the American Meteorological Society entitled “A 142-yr climatology of northern California landslides and atmospheric rivers”. The study introduces the eponymous 142-yr record of landslides in the San Francisco Bay Area, and compares that long record to a record of atmospheric-river landfalls in the area. Extreme precipitation often impacts ecosystems, agriculture, infrastructure, and water resources through resulting floods, erosion, and “mass movements”. Mass movements refers to various ways that large segments of earth, rocks, and debris can move downhill when conditions are right to allow them to break free from their usual settings to flow down steep hillslopes and valleys. When landslides meet infrastructure of almost any type, consequences can be dire. For example, recently, the U.S. Geological Survey estimated that annual losses in the US from landslides are between $2 billion and $4 billion, with an average of 25-50 people killed each year.

The study uses the 142-yr record of San Francisco Bay Area landslides between 1871 and 2012 to explore the relationship between 214 days on which landslides are known to have occurred and the contemporaneous weather. Landslides in the San Francisco Bay Area occur during winter with a peak in January and February and most often in coastal areas with steep topography in Sonoma, Marin, San Mateo, and Santa Cruz Counties. Some 76% of the identified landslide days occurred when strong atmospheric water vapor fluxes typical of atmospheric rivers arrived and persisted for ~20 h or more. A triggering factor for the landslides is intense precipitation, with rainfall rates above the 98th percentile of all storms in the area. A more detailed examination of the weather conditions on those landslide days indicates that 82% of the landslide days coincided with ARs over the near-offshore northeast Pacific. These results suggest that extreme precipitation associated with landfalling ARs precede or may trigger an overwhelming majority of landslides across the San Francisco Bay Area, a finding that should allow for much more focused landslide-hazard advisories in winters to come. 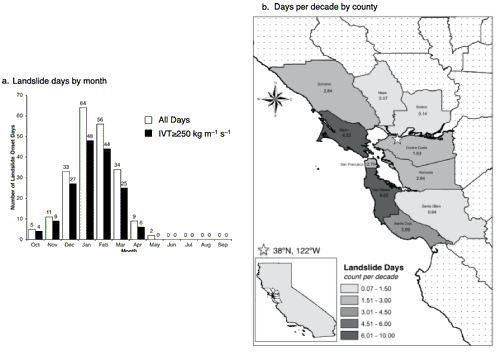 Figure 1: Number of well-dated landslide-onset dates in the San Francisco Bay Area from 1871–2012 (a) by month of year with and without concurrence of integrated water-vapor transport magnitudes ≥250 kg m–1 s–1 just offshore, and (b) by county per decade.