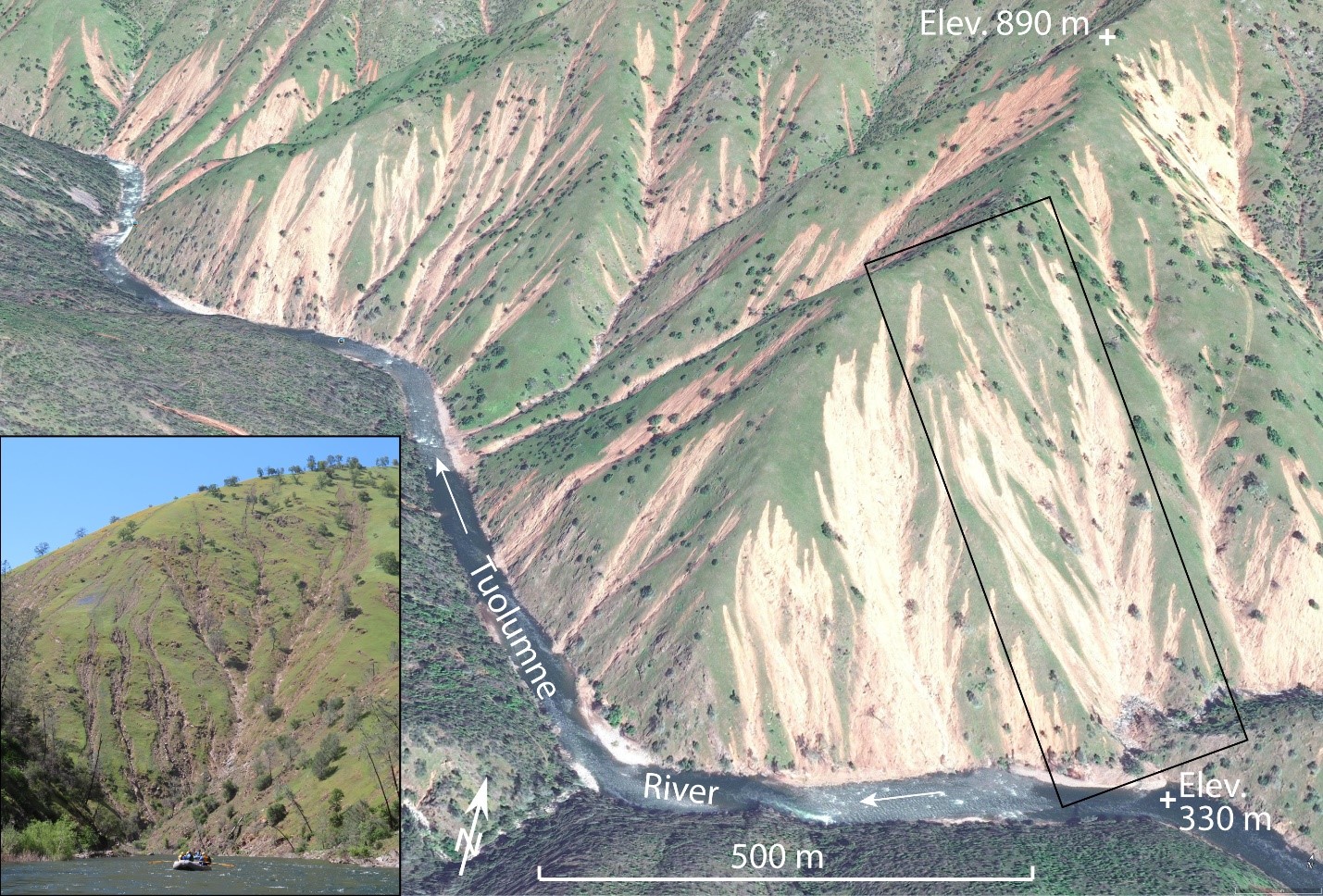 Figure 1. Oblique image of the hundreds of shallow landslides within the Tuolumne River canyon north of Groveland, California, caused by the 22 March 2018 NCFR. Inset image shows view from river level of the area encompassed by the black rectangle. Oblique image from GeoEye taken on 17 April 2018.

On March 22, 2018, intense rainfall initiated more than 500 shallow landslides (Fig 1) in a narrowly focused area of the Tuolumne River canyon near the town of Groveland, in the foothills of the Sierra Nevada. The landslides generated more sediment in one day than the river would normally transport in one year, raising water quality and reservoir sedimentation concerns. The intense rainfall also damaged parts of San Francisco’s water delivery system downstream of Hetch Hetchy; regional infrastructure impacts resulting from this storm were estimated at $74 million.

A strong atmospheric river (AR) produced roughly 100-150 mm (4-6 in) of rainfall in the 30 hours preceding the high-intensity rainfall event. As the AR exited the region, a narrow band of high intensity rainfall collocated with a cold front, known as a “narrow cold frontal rainband”, or NCFR (Fig 2), moved southeastward along the Sierra Nevada and stalled in the vicinity of Groveland and the Tuolumne River canyon. NCFRs are typically a few miles wide and tens of miles long. Thus, they impact a very small area compared to ARs, which typically extend hundreds of miles in width and over a thousand miles in length. The maximum 15-min rainfall intensity associated with the NCFR was 70 mm/h (2.75 in/h). This very high intensity rainfall likely caused increased pore water pressure at the soil-bedrock interface, leading to landslide initiation. With measured rainfall intensities also greater than the saturated hydraulic conductivity of the soil surface, overland-flow-inducing erosion may have also led to debris flow generation.

Meteorological forcing can cause extreme landscape change through delivery of intense and/or long‐duration rainfall. However, linkages between the particular meteorological features that lead to rainfall enhancement and the resultant landscape change have generally received little attention from the geomorphologic and landslide hazard communities. This work is intended to inspire more collaboration between the geomorphology and meteorology communities, as well as promote improved understanding of the meteorological phenomena that result in landscape evolution and hazard initiation. 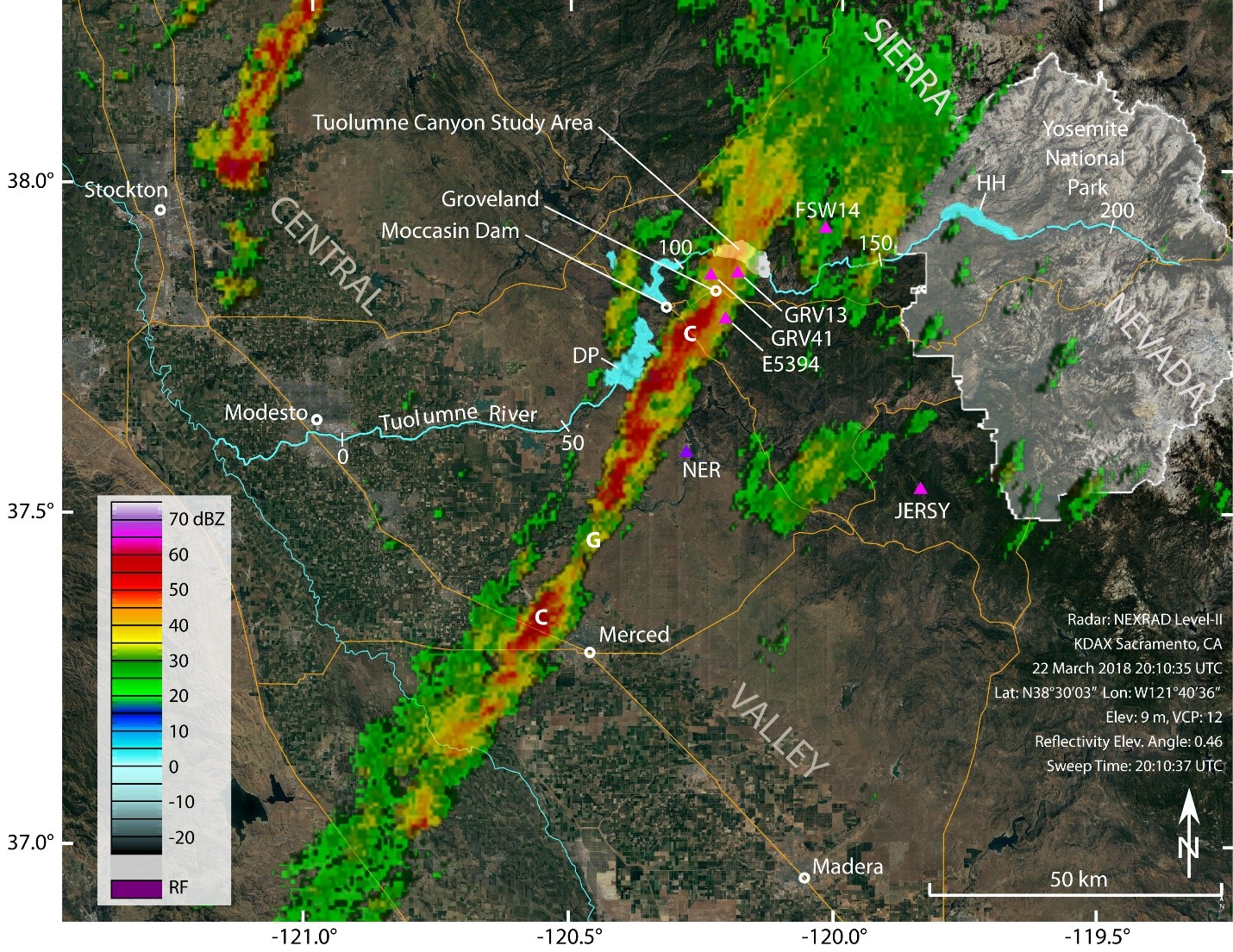 This work addresses the priority area of Atmospheric Rivers Research and Applications in the CW3E 2019-2024 strategic plan. This case is a compound event involving an atmospheric river followed by an NCFR and lends insight to how atmospheric rivers can “set the stage” for subsequent impacts, even if they are not impactful themselves. In this case, the AR elevated soil moisture such that subsequent high-intensity rainfall resulted in landslides and flash flooding. This publication also demonstrates CW3E’s core value of collaboration, by working across the disciplines of geomorphology and meteorology, as well as the core value of practical applications, by applying atmospheric science to geologic hazards.