A team from the Center for Hydrometeorology and Remote Sensing (CHRS) at UC Irvine led by Dr. Phu Nguyen, along with CW3E director Dr. Marty Ralph, recently published a paper entitled “PERSIANN Dynamic Infrared–Rain Rate Model (PDIR) for High-Resolution, Real-Time Satellite Precipitation Estimation” in the Bulletin of the American Meteorological Society (BAMS) where they introduce a new real-time satellite quantitative precipitation estimation technique – PDIR model. PDIR was created as part of the Atmospheric River (AR) program, a multi-organizational, multi-discipline program focused on becoming more resilient to extreme precipitation. A key strategy of the AR Program is to identify and fill observational data gaps to better prepare for extreme precipitation events, particularly ARs. As part of the AR Program’s observational strategy, the PDIR technique improves upon the current state of real-time satellite retrievals of precipitation totals over the US West Coast, which are imperative tools for natural hazard agencies combating AR-related flooding.

PDIR is based on the framework of the PERSIANN-Cloud Classification System (CCS) algorithm, which is in turn based on the original PERSIANN framework. PERSIANN, PERSIANN-CCS, and PDIR are satellite-based data-driven precipitation estimating systems that work primarily by establishing a link between geostationary-derived cloud-top temperature from infrared and rain rate using machine learning techniques. PDIR was created for the purpose of developing a high-spatiotemporal-resolution, near-real-time precipitation dataset that solely utilizes infrared data as input. PDIR advances the framework of the PERSIANN-CCS system by improving the capture of warm precipitation by adapting higher temperature thresholds, expanding the cloud classification system to include monthly sets of cloud types, and utilizing gridded monthly rainfall climatology data to create a dynamically shifting cloud top temperature–rain rate curve relationship.

PDIR was shown to accurately mimic the observed spatial patterns of rainfall over the western Contiguous U.S. (CONUS), notably the high rainfall amounts over the Cascade Range and Sierra Nevada. PDIR’s noteworthy performance in capturing the western CONUS’s rainfall, especially with high intensities and over mountainous regions, suggests a level of success in adapting to the challenges of the differing rainfall regimes that are intrinsic to the area, i.e. brightband, nonbrightband, and hybrid (seeder-feeder) rainfall. Of particular interest is that PDIR yields rainfall estimates for extreme rainfall events like ARs that are comparable to the nearly instantaneous, multi-sensor product, Stage II. Furthermore, the spatial patterns of PDIR’s precipitation estimates in mountainous regions better mimic those recorded by Stage IV than those shown by Stage II. The algorithm’s success at these scales suggests that PDIR contains the spatiotemporal richness and near-instantaneous availability necessary for rapid hazard response while showing potential to be useful for hydrologic and water resources applications, of which the latter has been a major weakness of infrared-based algorithms to date. As the implications of this study are valuable to a global audience, PDIR’s future direction is chiefly focused on its global implementation. 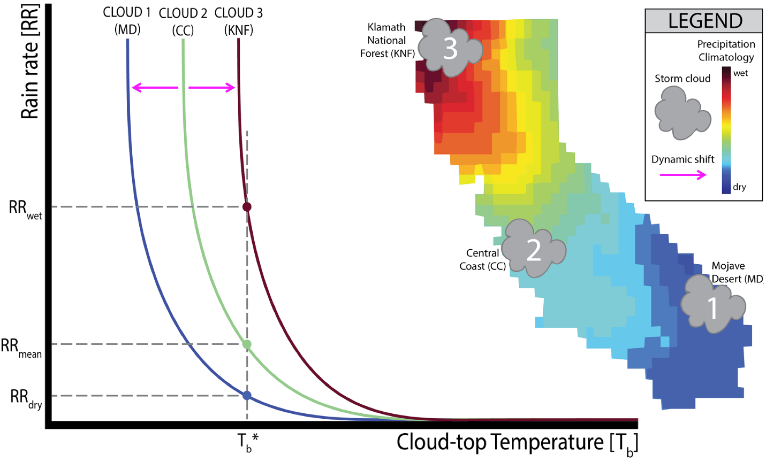 Figure 1. The dynamic cloud-top brightness temperature (Tb)-rain rate (RR) model: In PERSIANN-CCS, clouds that are identical in shape, size, temperature distribution, and all other defining characteristics but spatial location have completely identical RR readings. However, in PDIR, the underlying climatology causes shifts in the Tb-RR curves that characterize cloud-based models like PERSIANN-CCS and PDIR. In PDIR, drier climatologies such as the Mojave Desert (MD) cause a leftward shift in the Tb-RR relationships, which results in lower precipitation rates than at identical temperatures in moderately wet regions such as California’s Central Coast (CC), while wetter climatologies such as the Klamath National Forest (KNF) cause a rightward shift, which causes an increase in estimated precipitation rates for identical temperatures.