CW3E post-doc, Ty Brandt, lead a recently published paper presenting a new methodology to measure snowfall and compared to other SWE estimates. Accurate measures of snowfall are important because California depends on snow accumulation in the Sierra Nevada for its water supply, and accurate estimates of the total water stored in the snowpack are essential to water resource management. Presently, snowfall is measured by a combination of snow pillows, snow courses, and rain gauges. However, the scarcity of these measurements, particularly at high elevations, and their associated errors impose a limit on hydrologic forecasting. To reduce forecast errors, we require high-resolution, spatially-complete measurements of precipitation amount and phase. In snow-dominated watersheds, remotely sensed snow depth and snow water equivalent (SWE), with retrieval time scales that resolve individual storms, may ameliorate the existing data gap. Co-authors on the paper included CW3E’s Forest Cannon and Daniel Steinhoff, as well as collaborators from U.C. Santa Barbara, NASA Jet Propulsion Laboratory, the National Snow and Ice Data Center, and UCLA.

Since 2013, NASA’s Airborne Snow Observatory (ASO) has used airborne lidar to accurately measure snow depth in California’s Sierra Nevada for the purposes of advancing streamflow forecasting. However, in early April 2015, two flights 6 days apart happened to bracket a single snow storm. The research utilized these flights to develop a methodology using airborne lidar to directly measure the spatial variability of accumulated snow as a proxy for “snowfall” at a 50 m spatial resolution. In an end-to-end analysis, the researchers also compared gauge-interpolated and dynamically downscaled estimates of precipitation for the given storm with that of the ASO accumulated SWE (see figure below). This particular event proved an interesting test case due to the storm’s moderate snowfall generated by high amounts of dynamical forcing rather than strong orographic enhancement. Results highlighted that statistically-interpolated precipitation estimates were overly-reliant on climatological patterns of orographic enhancement, and that although ensemble WRF simulations accurately represented the event’s evolution and precipitation mechanisms, their snowfall distributions were highly sensitive to model parameterization choices.

While the April 2015 storm was a peculiar end-member for storms in the Sierra Nevada (quite distinct from the more impactful atmospheric rivers and their predominant orographic influences) it did serve as an important example to demonstrate the potential of differential lidar observations to quantify snowfall. By directly observing the snowfall distribution, ASO data provided validation of the hydrometeorology across complex terrain, in a way that has never before been possible. Research that utilizes this technology to further investigate multiple storms, spanning a variety of snow climates, would enhance our understanding of precipitation mechanisms. Ultimately, this would improve mountain precipitation representation within statistical methods, weather models, and climate models, directly helping to improve the accuracy and precision with which we can forecast hydrometeorological extremes. 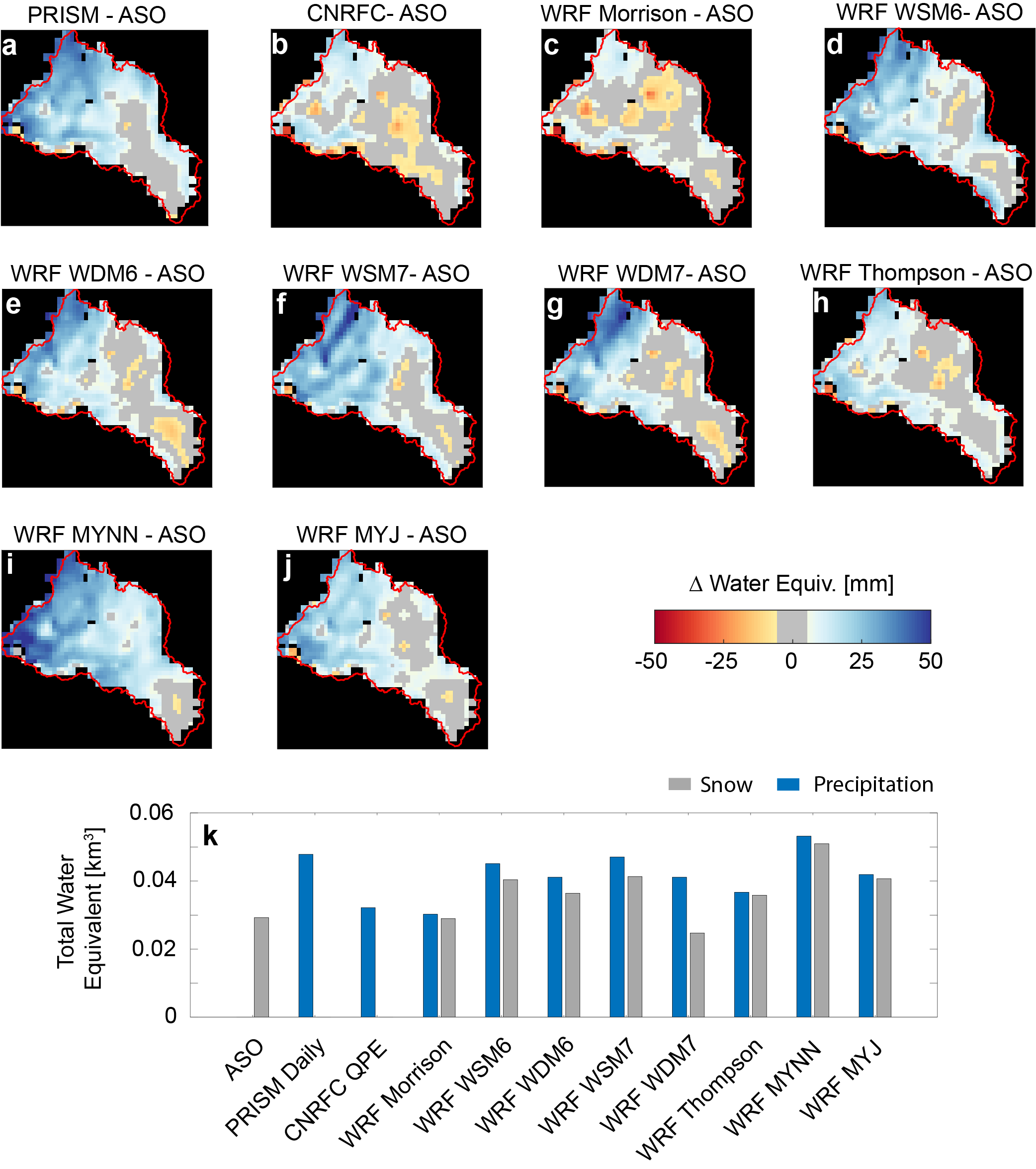