Seasonality of MJO Impacts on Precipitation Extremes Over the Western U.S.

A new paper entitled “Seasonality of MJO Impacts on Precipitation Extremes Over the Western U.S.” was recently published in the Journal of Hydrometeorology and authored by CW3E researcher Jiabao Wang, Mike DeFlorio (CW3E), Bin Guan (UCLA/JPL), and Chris Castellano (CW3E). As part of CW3E’s 2019-2024 Strategic Plan, CW3E seeks to improve understanding of the subseasonal-to-seasonal (S2S) predictability of extreme weather over the western U.S. and develop a comprehensive understanding of the physical mechanisms and statistical characteristics of extreme precipitation events to inform current and future resource and risk management. This study (Wang et al. 2022) discovered strong seasonality in boreal winter western U.S. extreme precipitation that is modulated by seasonality in the Madden-Julian oscillation (MJO) and its impacts on the large-scale circulation and atmospheric river (AR) activity over the North Pacific and western North America. This research was funded by the California Department of Water Resources Atmospheric River Program Phase III and the National Aeronautics and Space Administration.

The findings in this study suggest a value for future studies to consider the seasonal dependence of the MJO-precipitation extreme relationship. The results also have implications for the source of S2S predictions, which has potential value to stakeholders including water resource managers. 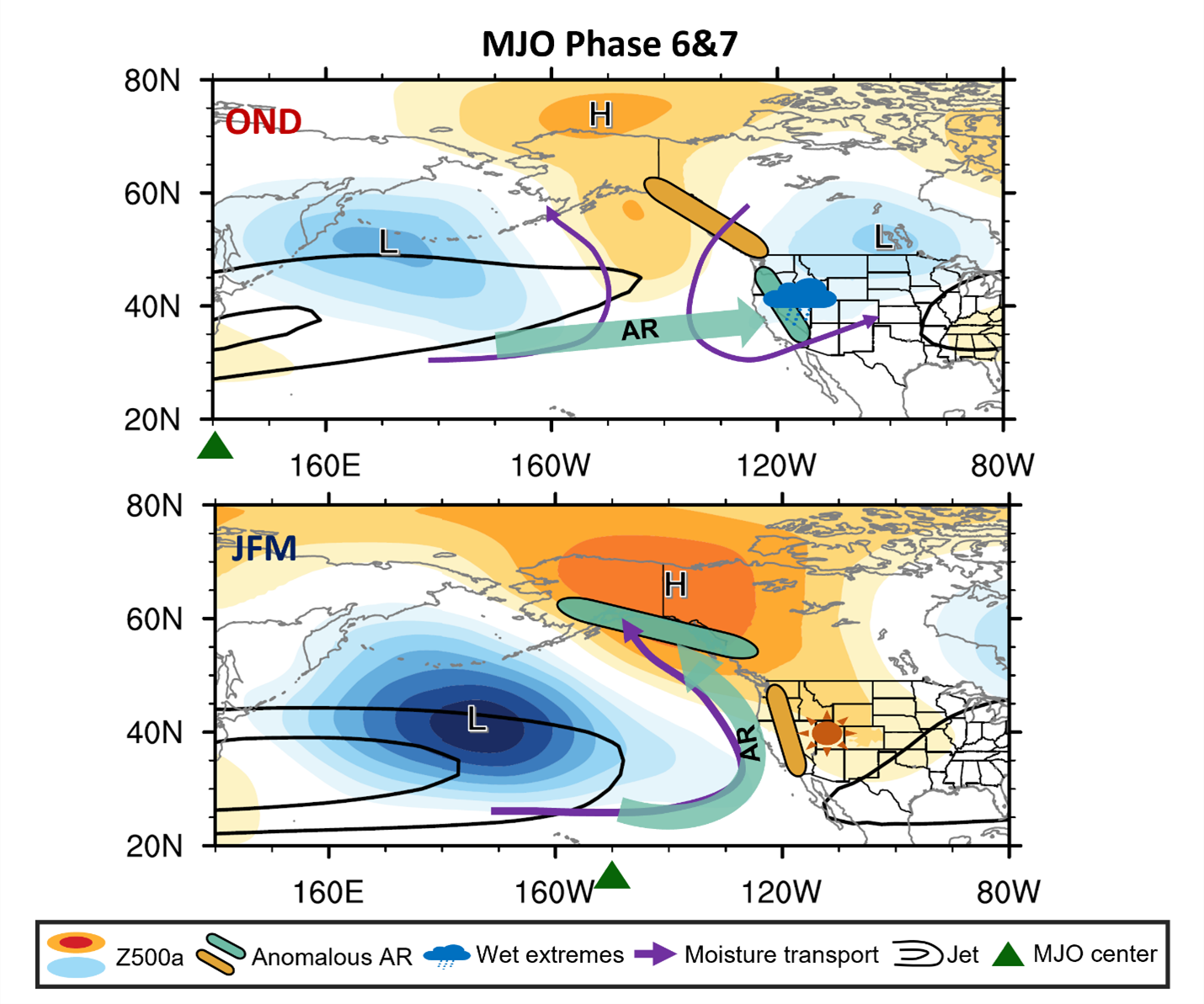 Figure 1: The schematic diagram of extratropical response (precipitation extremes, 500-hPa geopotential height anomalies, anomalous moisture transport, and AR activity) to MJO phases 6-7 in (top) OND and (bottom) JFM. Results are derived from the 5-9-day lagged average after the active MJO day at day 0. The green triangle indicates the center longitude of enhanced MJO convection at day 0. The jet (mean 250-hPa zonal wind as the basic state) interval is 20 m s-1 starting at 30 m s-1. The relative magnitude of each component is indicated by the difference in the thickness and length, and the variables shown may not be entirely precise in location and pattern.