CW3E postdoc Tom Corringham and coauthor Daniel Cayan have published a paper in Weather Climate and Society entitled “The Effect of El Niño on Flood Damages in the Western United States.”

The study quantifies insured flood losses across the western United States from 1978 to 2017, presenting an analysis of National Flood Insurance Program (NFIP) claims and losses over this period. While considerably lower (only 3.3%) than broader measures of direct damages measured by a National Weather Service (NWS) dataset, NFIP insured losses are highly correlated to NWS annual damages and provide flood impacts at a finer degree of spatial and temporal resolution. The NFIP data reveal that 1% of extreme events, covering wide spatial areas, caused over 66% of total insured losses.

Connections between extreme events and El Niño–Southern Oscillation (ENSO) that have been documented in past research are borne out in the insurance data. In coastal Southern California and across the Southwest, El Niño conditions have had a strong effect in producing more frequent and higher magnitudes of insured losses, while La Niña conditions significantly reduced both the frequency and magnitude of losses. In the Pacific Northwest, the opposite pattern appears, although the effect is weaker and less spatially coherent.

Figure 1: ENSO composites and mean extended cool season (ONDJFM) monthly losses per $100,000 of coverage. Enhanced losses are colored red and reduced losses are blue, with color intensity on a log scale. Boxed grid cells are significantly different from the overall ONDJFM mean at p < 0.1, using analysis of means analysis. Boxed cells with crosses are significant at p < 0.05. Significantly enhanced losses are seen in the Pacific Northwest during La Niña months and in Southern California in El Niño months.

The persistent evolution of ENSO offers the possibility for property owners, policy makers, and emergency planners and responders that unusually high or low flood damages could be predicted in advance of the primary winter storm period along the West Coast. Within the 40-year NFIP history, the study finds that the multivariate ENSO index (MEI) would have provided an 8-month look-ahead for heightened damages in Southern California. 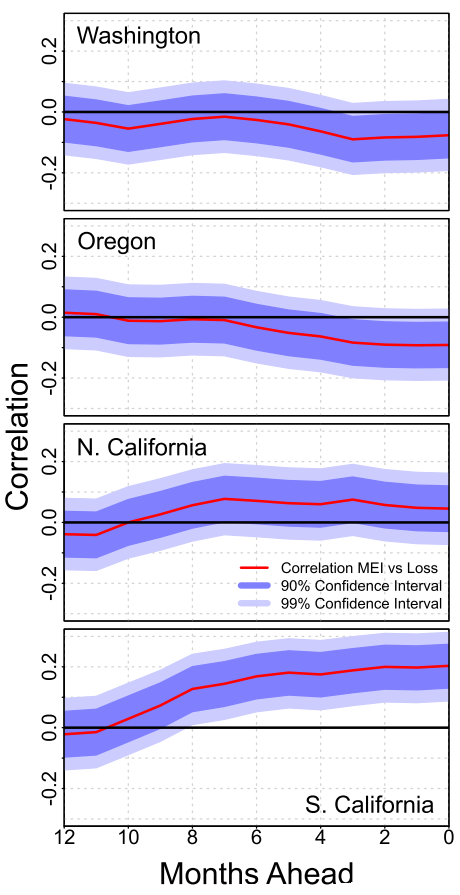