Perspectives on California’s Drought and the Relation to Atmospheric Rivers 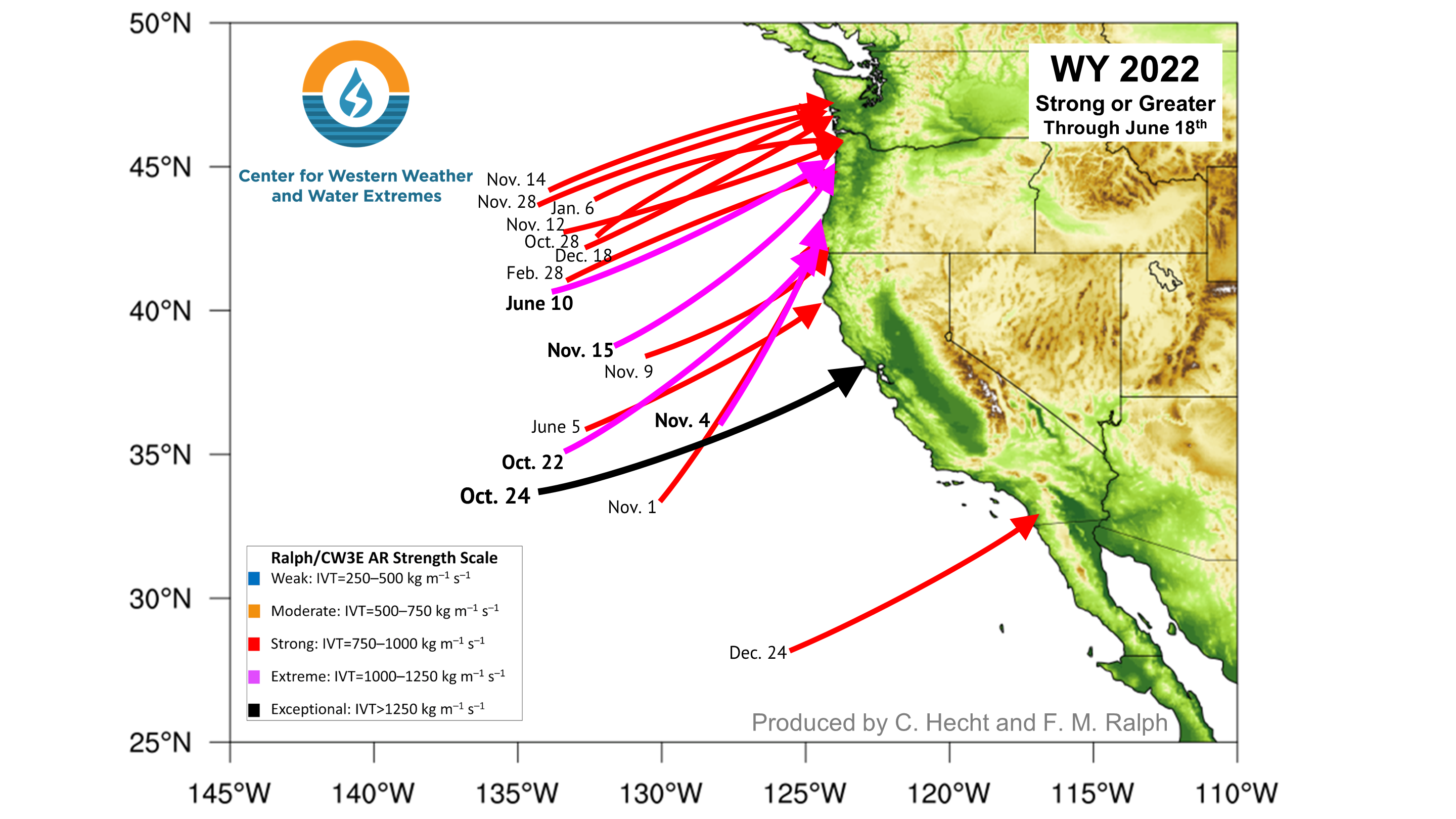 California’s variable hydroclimate is highly dependent on atmospheric river (AR) storms that transport high concentrations of moisture via long and narrow corridors from the subtropical Pacific to the western United States. A lack or surplus of these storms each year will typically determine whether California experiences a wet or dry water year (begins October 1st and ends September 30th). While ARs are an important contributor to California’s snowpack and water supply, intense or successive storms can result in hydrologic impacts, such as flooding, landslides, road closures, and avalanches. Conversely, drought can arise when there is a lack of AR activity over the state for an extended period.

The Center for Western Weather and Water Extremes at Scripps Institution of Oceanography utilizes global model data to track and catalog ARs throughout the water year based on the magnitude of moisture transport within the core of these storms. This water year has been a tale of feast or famine when it comes to ARs and West Coast precipitation.

On October 24th, 2021, a powerful AR brought exceptional strength conditions to a large portion of northern California, resulting in record breaking precipitation accumulations, urban flooding, and strong winds (Black arrow in image above). An AR of this magnitude at the beginning of the water year suppressed the fire season and moistened the dry landscapes after summer but was not an indicator for the rest of the winter. From January through March, typically the most active stretch of AR activity for the state, no ARs of strong or greater intensity made landfall over California. The lack of ARs in January and through March, on the heels of two prior water years that experienced less than normal AR activity, has combined to exacerbate severe to exceptional drought conditions across California.

In contrast, this winter saw several periods where persistent high pressure in the eastern Pacific steered the ARs towards the Pacific Northwest, taking AR activity away from California and increasing precipitation over Washington and Oregon. For example, 14 ARs brought strong or greater strength conditions, four more than a typical water year to Washington and Oregon. Additionally, four separate extreme ARs made landfall over the Pacific Northwest, producing flooding, heavy snowfall, and inundating major thoroughfares (e.g., Interstate 5). This increased activity of landfalling ARs continued into mid-June when one of the four extreme ARs brought record breaking AR conditions and precipitation to Oregon and the Intermountain West, during a time at which AR activity typically begins to subside. The June 10th extreme AR produced heavy precipitation on top of a large snowpack in the Cascades and Rocky Mountains, exacerbating flooding across the region and closing Yellowstone National Park to visitors. It is due to the persistent storm track and increased AR activity over the Pacific Northwest that Oregon and Washington received above normal precipitation through June and a large portion of the region is not experiencing any drought conditions (outside of the lee of the Cascades and far southwestern Oregon). A distinctly different story compared to drought-stricken California.