The most recent figures can be found on Mike Dettinger’s web page. 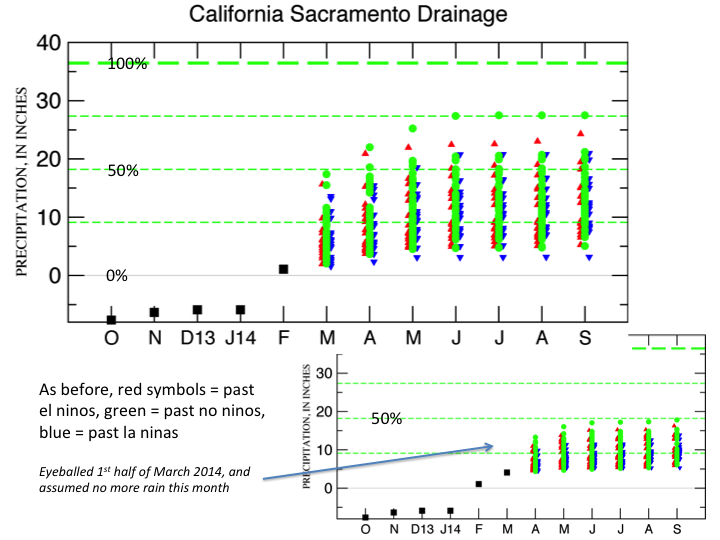 Researcher Mike Dettinger has updated his analysis examining the likelihood of the California drought ending by the end of the current water year on Sept 30, 2014. This new analysis utilizes the just released February precipitation totals for California’s climatic divisions as well as best guess estimates for March 2014 precipitation. Visit the CW3E Drought Info Page to see updated projections for all seven of California’s climatic divisions.

CW3E researcher Mike Dettinger was interested in knowing the likelihood of California recovering from the drought by the end of the current water year on Sept 30, 2014. The method he came up with starts with the precipitation deficit from last water year (Oct 2012 – Sept 2013). Observed precipitation for Oct 2013 thru Jan 2014 was used to determine what has been added to this previous water year deficit, depicted in the above figure by the black squares. Here negative precipitation refers to the carryover deficit from the period extending back to October 2012.

Projections into the future of cumulative precipitation since Oct 2012 were computed by adding observed monthly precipitation from each year in the historical record, 1931-2013, or a total of 83 projections. For each future month (Feb-Sep 2014) the red dots in the above figure represent each of the 83 projections.

The example shown above is for the Sacramento Drainage region (CA Climate Division 2). For this region, only 2 of the 83 projections make it above the 75%-tile level by the end of Sept 2014. None of the projections show the 24-month cumulative precipitation reaching “normal” levels by the end of this water year.

Visit the CW3E Drought Info Page to see projections for all seven of California’s climatic divisions.