While the Pacific Northwest experienced serious flooding in January and February, areas farther south are bracing for drought after an extremely dry winter. People in these dry regions are hoping for a “Miracle March” to deliver substantial rain and snow to alleviate drought risk. However, a new experimental forecast tool looking out as far as three weeks shows little chance of this happening. The tool focuses on the odds of atmospheric rivers hitting the region over the next three weeks. Atmospheric river storms can deliver up to half of California’s total annual precipitation and cause 90 percent of flooding in the state, while a lack of enough of these storms can lead to drought.

The forecast tool has just been made available online at the Center for Western Weather and Water Extremes (CW3E) at Scripps Institution of Oceanography at UC San DIego. Developed in partnership with the NASA Jet Propulsion Laboratory, the tool displays forecasted atmospheric river (AR) occurrence at weeks 1-3 lead time. The public release of this product, and the underlying research supporting it, is part of a joint partnership between CW3E and NASA JPL, sponsored by the California Department of Water Resources, to improve the two-week to two-month lead time of forecasts, known as subseasonal-to-seasonal (S2S) forecasts. The aim of these improved forecasts of atmospheric rivers and precipitation is to benefit western U.S. water resource management.

This is the first CW3E subseasonal-to-seasonal (S2S) prediction product to be released to the public, and is based on the National Centers for Environmental Prediction (NCEP) Climate Forecast System (CFS) data. For weeks 1-2 (days 1-14 lead time), the daily probability of forecasted AR occurrence based on the fraction of CFS ensemble members that predict an AR occurring is displayed; for week-3, the forecasted anomaly of the number of AR days to occur during week-3 (days 15-21 lead time) is displayed. Forecasts are updated each Friday on the CW3E website, and the hindcast skill assessment associated with these forecast products is provided in DeFlorio et al. 2019b (JGR-Atmospheres, S2S Special Issue).

The public release of the product was approved by an internal CW3E S2S Advisory Panel, co-chaired by CW3E Director Dr. F. Martin Ralph and NASA JPL Chief Scientist for Earth Sciences Dr. Duane E. Waliser. An example of the weeks 1-3 forecast products are shown below.

The product can be accessed at https://cw3e.ucsd.edu/iwv-and-ivt-forecasts/#S2S. An example of the outlook is included below.

Plain Language Summary of Weeks 1-3 AR Occurrence Outlook
This is a new forecast tool that makes a prediction of the likelihood of an AR occurring over the North Pacific/Western U.S. domain at weeks 1-3 lead time. For Week-1 and Week-2, the color shading represents the percentage chance of AR occurrence on each day into the future, from 1 to 15 day lead time. For Week-3, the bottom plot depicts the chances of above (blue) or below (red) average AR conditions based on long-term statistics in a given forecast model. Historical skill of these forecasts are very good during week-1, modestly higher than a prediction based on climatology at week-2, and no better than climatology (i.e. not very skillful) at week-3 over much of the entire region. 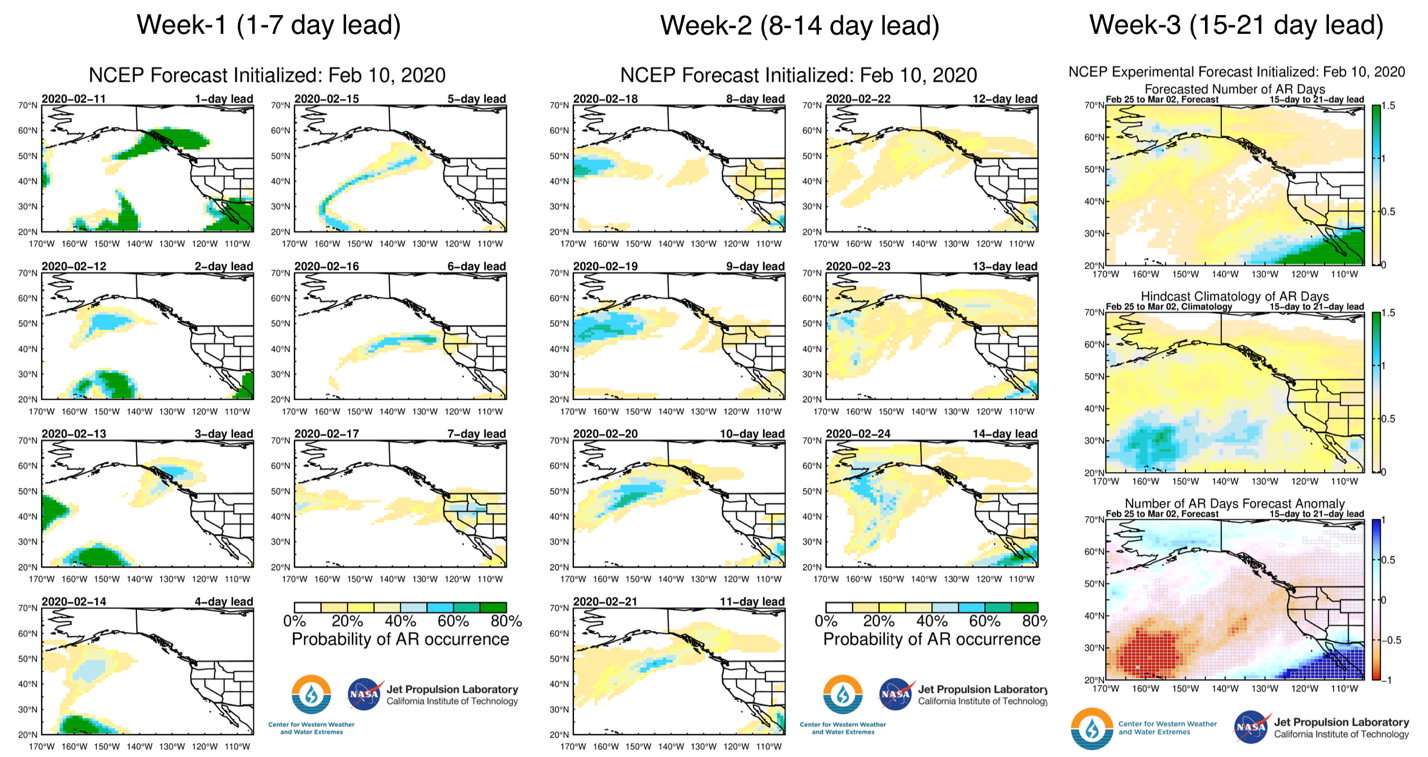