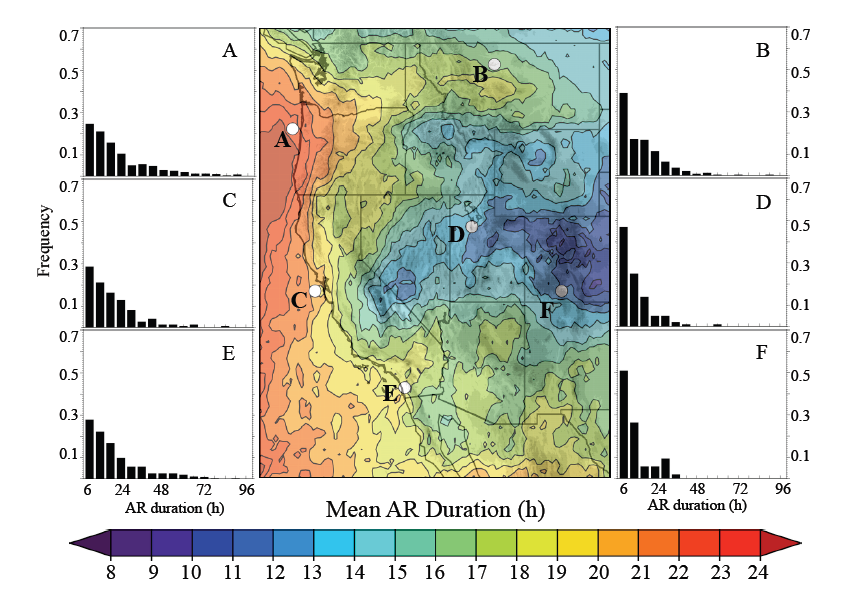 This paper quantifies the climatological frequency and duration of atmospheric rivers (ARs) over the western U.S., as well as the contribution of ARs to heavy precipitation events and cool-season hydroclimate over this region. ARs are objectively identified within reanalysis data based on integrated water vapor transport, which is not only shown to be well-correlated with cool-season precipitation over the West, but also useful for tracking AR penetration from the coast to the interior. Hence, this study lays the groundwork for the development of forecasting tools that will enhance the predictability of ARs and their impacts on the western U.S. This paper presents key findings from a dissertation completed by Jon Rutz at the University of Utah, and is coauthored by his advisor, Jim Steenburgh, and by the CW3E director, F. Martin Ralph. It has also become one of the 10 most-read articles in Monthly Weather Review for the year.

Narrow corridors of water vapor transport known as atmospheric rivers (ARs) contribute to extreme precipitation and flooding along the West Coast of the United States, but knowledge of their influence over the interior is limited. Here, the authors use Interim European Centre for Medium-Range Weather Forecasts (ECMWF) Re-Analysis (ERA-Interim) data, Climate Prediction Center (CPC) precipitation analyses, and Snowpack Telemetry (SNOTEL) observations to describe the characteristics of cool-season (November–April) ARs over the western United States. It is shown that AR frequency and duration exhibit a maximum along the Oregon–Washington coast, a strong transition zone upwind (west) of and over the Cascade–Sierra ranges, and a broad minimum that extends from the “high” Sierra south of Lake Tahoe eastward across the central Great Basin and into the deep interior. East of the Cascade–Sierra ranges, AR frequency and duration are largest over the interior northwest, while AR duration is large compared to AR frequency over the interior southwest. The fractions of cool-season precipitation and top-decile 24-h precipitation events attributable to ARs are largest over and west of the Cascade–Sierra ranges. Farther east, these fractions are largest over the northwest and southwest interior, with distinctly different large-scale patterns and AR orientations enabling AR penetration into each of these regions. In contrast, AR-related precipitation over the Great Basin east of the high Sierra is rare. These results indicate that water vapor depletion over major topographic barriers is a key contributor to AR decay, with ARs playing a more prominent role in the inland precipitation climatology where lower or less continuous topography facilitates the inland penetration of ARs.

A personal use copy of the article is available here.