El Nino-fueled storms over the last few days, including a land-falling atmospheric river on 5 January (see cw3e.ucsd.edu for more details), have brought San Diego county’s accumulated winter precipitation to well above normal for this time of year. These numbers are tracked by the California-Nevada Applications program (cnap.ucsd.edu) and the Center for Western Weather and Water Extremes (cw3e.ucsd.edu) at UCSD’s Scripps Institution of Oceanography, in association with KPBS. The precipitation tracking tool shows the impact of the recent storms on the accumulated winter precipitation: 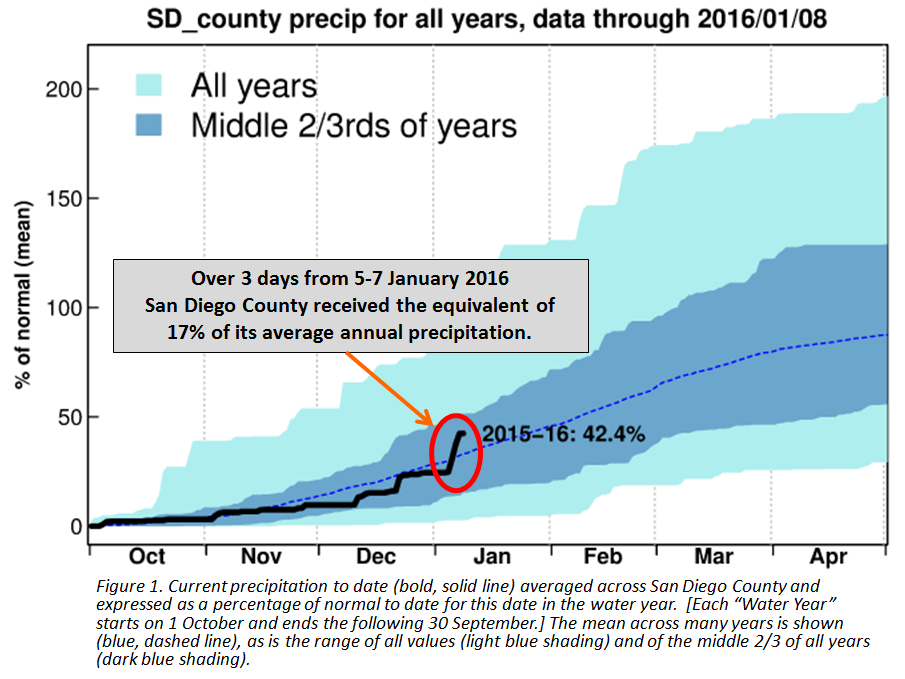 In the last three days, San Diego county has received almost 17% of the amount of precipitation it receives in an entire year, on average.

Precipitation gauge records compiled by the California Nevada River Forecast Center show accumulations of 3-5″ over much of the Los Angeles basin in the 72 hour period, reaching 7″ in some locations in the surrounding mountains. San Diego county accumulations are 1-3″ over much of the city, and 4-5″ in the North County interior: 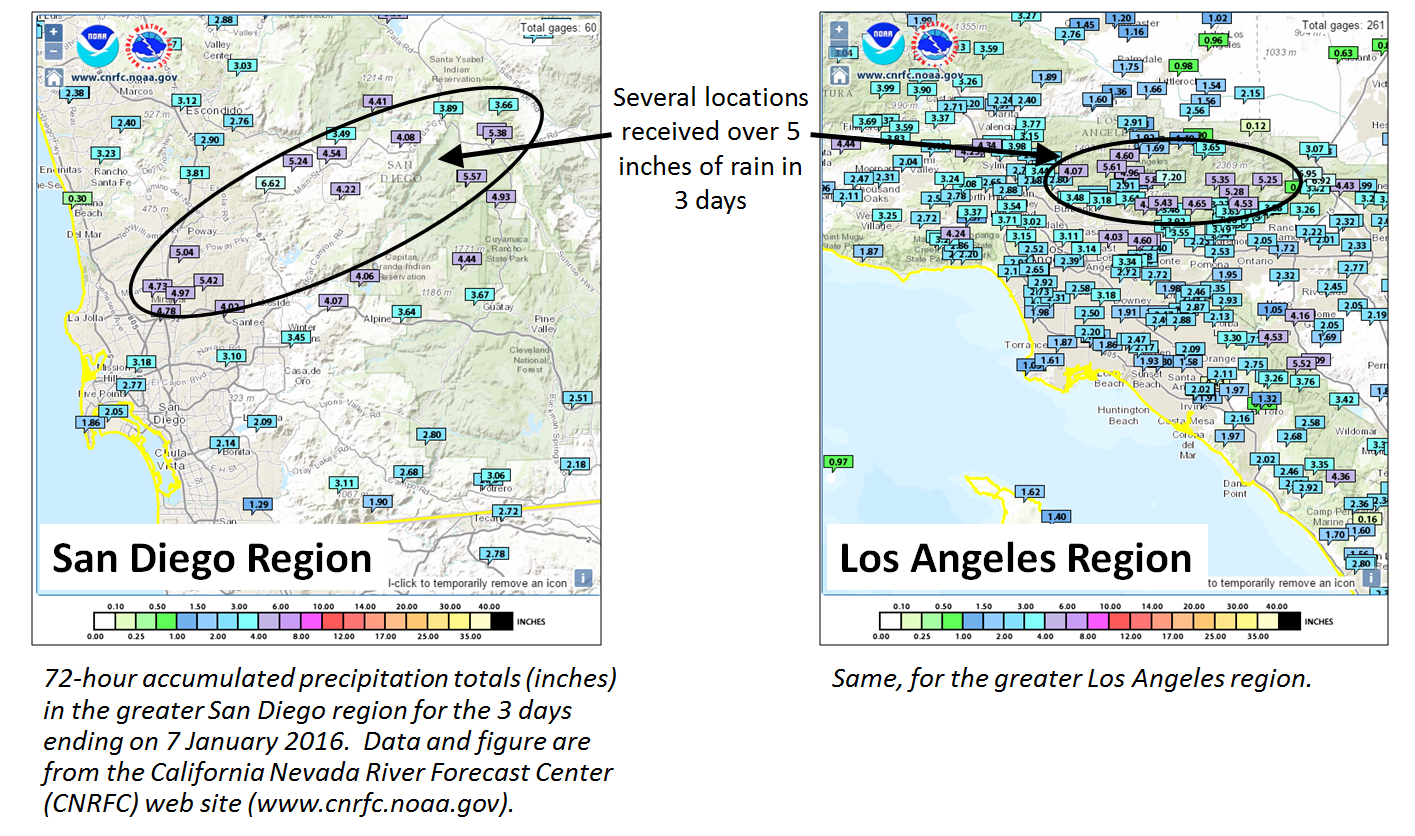 Before the recent storms hit, the accumulated precipitation in the Los Angeles region since the winter started was only 11% of the typical end-of-winter total, far below the average value of 29%. In three days the accumulation has jumped to 27%. This rapid increase is more than is experienced in 95 out of 100 wet periods of 3-day duration in the region, leading to strong flows in the normally quiescent Los Angeles river and localized flooding in Southern California coastal areas.

Precipitation during the week was widespread, with rain and snow delivered from Washington to Northern Mexico. California statewide totals also were boosted during the Jan 4-7 period (cnap.ucsd.edu), although amounts were not as heavy in Northern California as they were in Southern California.

These accumulated precipitation totals can be tracked in real time from the California-Nevada Applications Project (CNAP) and Center for Western Weather and Water Extremes (CW3E)’s “San Diego Precipitation Page”. This includes monitoring of how current winter precipitation compares to that during the last 5 strongest El Nino winters (1982-83, 1997-98, 1957-58, 1972-73, and 1965-66), shown as the colored lines in the upper panels: 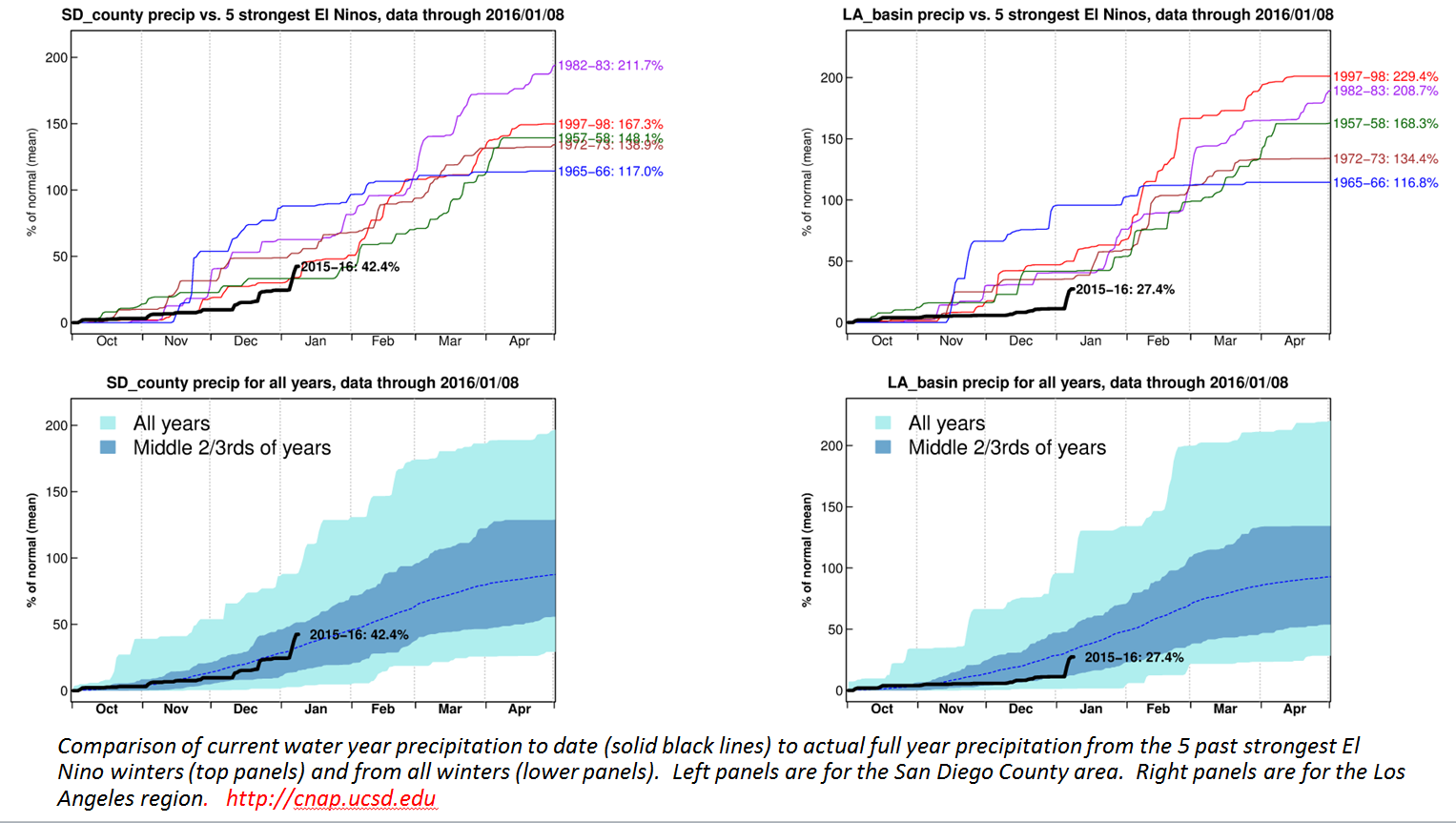 The current El Nino event is is one of the three strongest in records that go back to 1950, with a broad area of unusually warm ocean surface waters in the tropical Pacific ocean and highly anomalous winds and other atmospheric conditions in the region. El Nino events can alter the North Pacific winter storm track, producing unusually wet winters in Southern California about 60% of the time, compared to about 11% of the time during years when no El Nino or its opposite, La Nina, is present. Forecasts indicate that El Nino conditions are likely to persist through the spring of 2016, before fading in the early summer of 2016.

For a PDF version of this information click here.