Where was the most extreme precipitation yesterday in the West?

Sign up to receive an automated “R-Cat Extreme Precipitation Alert” email from CW3E showing the most extreme precipitation events over the previous 3 days (only on the rare days when there is extreme precipitation). The attached map shows the locations of 52 such reports from the storm that hit the West from 7-10 January 2017.

To subscribe to this automated CW3E R-Cat Extreme Precipitation Alert via email: just email a message with subject “subscribe” to rcatalert@cirrus.ucsd.edu. 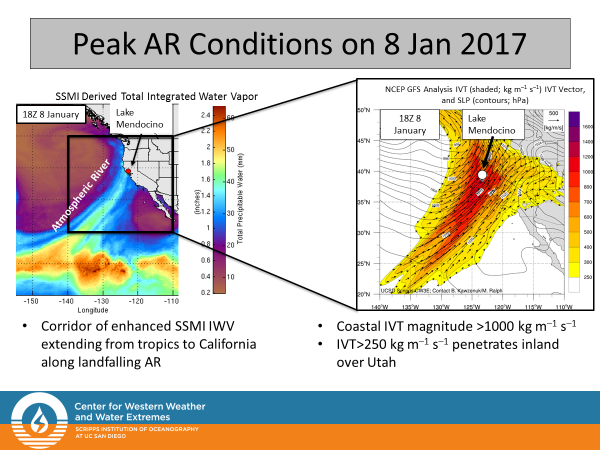 The alerts use a simple new method to identify extreme events, which was published after analysis of decades of daily rainfall showed that 3-day precipitation totals were the most logical choice to characterize events that can have the broadest and largest impacts, especially in the Western U.S. The categorization method is based on 3-day observed precipitation totals (rain and/or the liquid equivalent of snow that fell), where “R-Cat” is short for “Rainfall Category:”

Historically these R-Cat events have occurred nationally with the following average annual frequencies (based on a network of several thousand rain gages that each had to have at least 30 years of daily observations; note that the R-Cat Alert tool does not require sites to have had 30 years of data, so more sites are likely to be found meeting the R-Cat criteria than in the earlier detailed analysis):

R-Cat 1: 48 episodes involving a total of 173 rain gauge sites that exceed the R-CAT1 threshold per year

Notably, in light of the events of last weekend, it is useful to note that, in the Western US between 1948 and 2010, 44 of the 48 occasions when RCAT3 or RCAT4 conditions were reached coincided with the arrival of an atmospheric-river storm.