CW3E PhD Candidate Reuben Demirdjian, alongside coauthors including Naval Research Laboratory collaborators Jim Doyle and Carolyn Reynolds, Scripps collaborator Joel Norris, CW3E Postdoctoral Scholar Allison Michaelis, and CW3E Director F. Martin Ralph, published a paper in the Journal of Atmospheric Sciences titled “A Case Study of the Physical Processes Associated with the Atmospheric River Initial Condition Sensitivity from an Adjoint Model”. This work is a part of CW3E’s ongoing effort to understand and improve the predictions of atmospheric rivers (AR) and their impacts on public safety and water management, supporting local water agencies, California Department of Water Resources, NOAA and the U.S. Army Corps of Engineers. This research advances the understanding of why errors in weather forecast model representation of AR conditions offshore can lead to errors in AR landfall conditions and associated precipitation. It is through a dynamical feedback process that connects errors in water vapor and winds in an AR offshore at the start of a forecast, to precipitation upon landfall. The results contribute to Atmospheric River Reconnaissance, which collects unique airborne observations offshore in and around ARs prior to their landfall, for assimilation in global weather prediction models and in CW3E’s West-WRF regional weather model.

This paper performs an analysis of a strong landfalling atmospheric river which compares the evolution of a control simulation with that of an adjoint-derived perturbed simulation using the Coupled Ocean/Atmosphere Mesoscale Prediction System (COAMPS). The water vapor transport is found to be substantially enhanced at the California coast in the perturbed simulation during the time of peak precipitation, demonstrating a strengthened role of the orographic precipitation forcing. Similarly, moisture convergence and vertical velocities derived from the transverse circulation are found to be substantially enhanced during the time of peak precipitation, also demonstrating a strengthened role of the dynamic component of the precipitation. Importantly, both components of precipitation are associated with enhanced latent heating by which: i) a stronger diabatically driven low-level potential vorticity anomaly strengthens the low-level wind (and thereby the orographic precipitation forcing), and ii) greater moist diabatic forcing enhances the Sawyer-Eliassen transverse circulation and thereby increases ascent and dynamic precipitation (Fig 1). 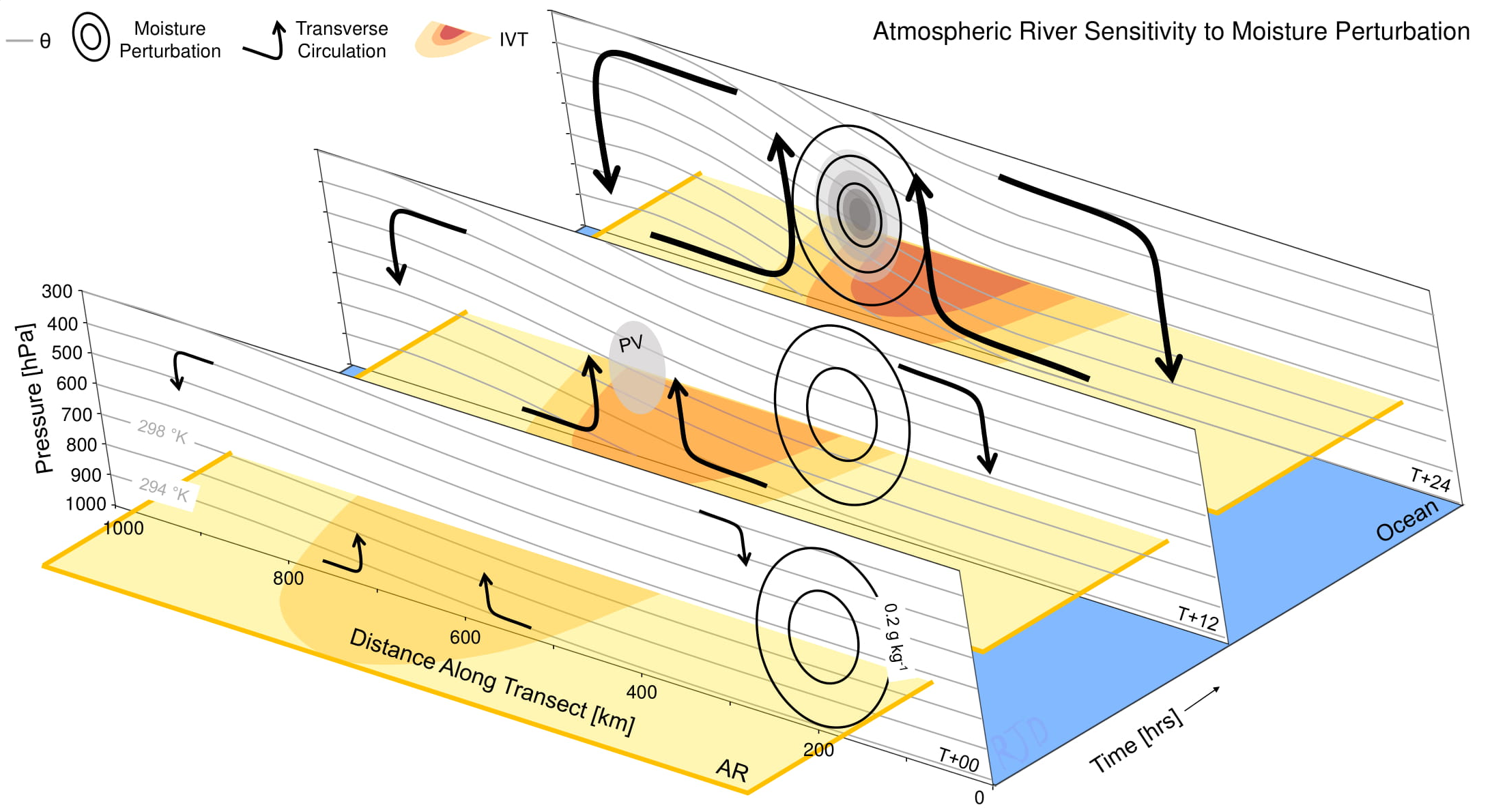 Figure 1: (Figure 12 from Demirdjian et al., 2019) A pseudo-4D schematic illustrating the evolution of cross sections in an AR relative reference frame. The IVT values of the AR are shown in the yellow to red shading (small to large values respectively). The cross sections show potential temperature (gray contours), the LPF moisture perturbation (black contours), and the transverse circulation in plane of the cross section in the black arrows with the strength indicated by the length and arrow thickness.