Empirical Return Periods of the Most Intense Vapor Transports during Historical Atmospheric River Landfalls on the U.S. West Coast

Atmospheric rivers (ARs) come in all intensities from weak to extremely intense, dropping precipitation amounts –when they encounter mountain ranges on the West Coast– ranging from modest and mostly beneficial to large and mostly hazardous. Because of this wide range of intensities and outcomes, clear and simple communication of the level of storm and flood risks posed by a given storm in observations and forecasts is an important challenge.

A new paper from CW3E in the Journal of Hydrometeorology, ‘Empirical Return Periods of the Most Intense Vapor Transports during Historical Atmospheric River Landfalls on the U.S. West Coast,’ explores the estimation and use of AR return periods as a way to describe very strong ARs to the scientific community and public simply and usefully. The paper is the product of recent research by Mike Dettinger of the US Geological Survey and a long-time CW3E partner, by Marty Ralph, CW3E Director, and by Jonathan Rutz, NWS Salt Lake City and another long-time CW3E partner.

The idea explored is that, for example, a particularly strong AR might be described as being of a magnitude “only seen historically about once in 10 years,” rather than relying on descriptions like “twice as intense as the last one” (whatever that means) or “like the great storm of Feb 7 2017” (which few of us would recall in any detail). The paper documents how strong the most intense AR landfalls (as measured by the amounts of moisture they deliver) have been in the 37-yr period from 1980-2016, and how often storms of various (strong) intensities have made landfall at each latitude along the West Coast (e.g., Fig. 1) and by season of the year. In making these estimates, Dettinger et al. found that the ARs that have delivered the most intense observed rates of vapor transport have made landfall on and near the Oregon coast, with maximum storm intensities falling off to the north and even more so to the south towards southern California where the maximum intensities are less than half the intensity of the strongest Oregon landfalls. When storm-total vapor deliveries are considered, the largest storm totals have followed a broadly similar geographic pattern. Surprisingly though, these largest storm totals were as large as they were not because of their rates of transport but rather because of how long they persisted on a given coastal location. 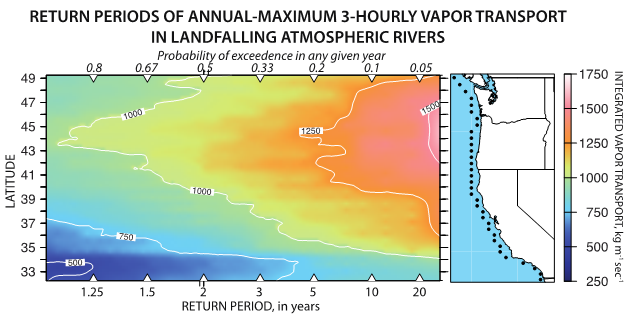 Figure 1. Historical return periods (and exceedence probabilities) of annual-maximum integrated vapor transport rates, water years 1981–2016, along the U.S. West Coast at grid cells indicated by black dots in maps along right-hand side of the panels, based on MERRA-2.

These patterns of strong-AR landfall provide important perspectives regarding the likelihoods of recurrence of the most intense AR storms that have reached the West Coast, and because precipitation intensities and totals from AR storms depend directly (albeit not solely) on vapor-transport rates and totals, the historical return periods of AR storms offer a useful way to categorize large-AR storms and the risks they pose.