Atmospheric rivers (ARs) are responsible for up to 90% of major flood events along the U.S. West Coast (Ralph et al. 2019). The timescale of subseasonal forecasting (two weeks to one month) is a critical lead time for proactive mitigation of flood disasters. The NOAA/Climate Testbed Subseasonal Experiment (SubX) is a research-to-operations project with almost immediate availability of forecasts. It has produced a reforecast database that facilitates evaluation of flood forecasts at these subseasonal lead times. Here, they examine the SubX driven forecast skill of AR-related flooding out to 4-week lead using the Distributed Hydrology Soil Vegetation Model (DHSVM), with particular attention to the role of antecedent soil moisture (ASM), which modulates the relationship between meteorological and hydrological forecast skill. They study three watersheds along a transect of the U.S. West Coast: the Chehalis River basin in Washington, the Russian River basin in Northern California, and the Santa Margarita River basin in Southern California.

The research support to co-authors of this paper was provided by the CW3E at the Scripps Institution of Oceanography UC San Diego via AR Program Phase II, sponsored by the California Department of Water Resources, and NOAA Regional Integrated Sciences and Assessments (RISA)’s support through the California–Nevada Applications Program. 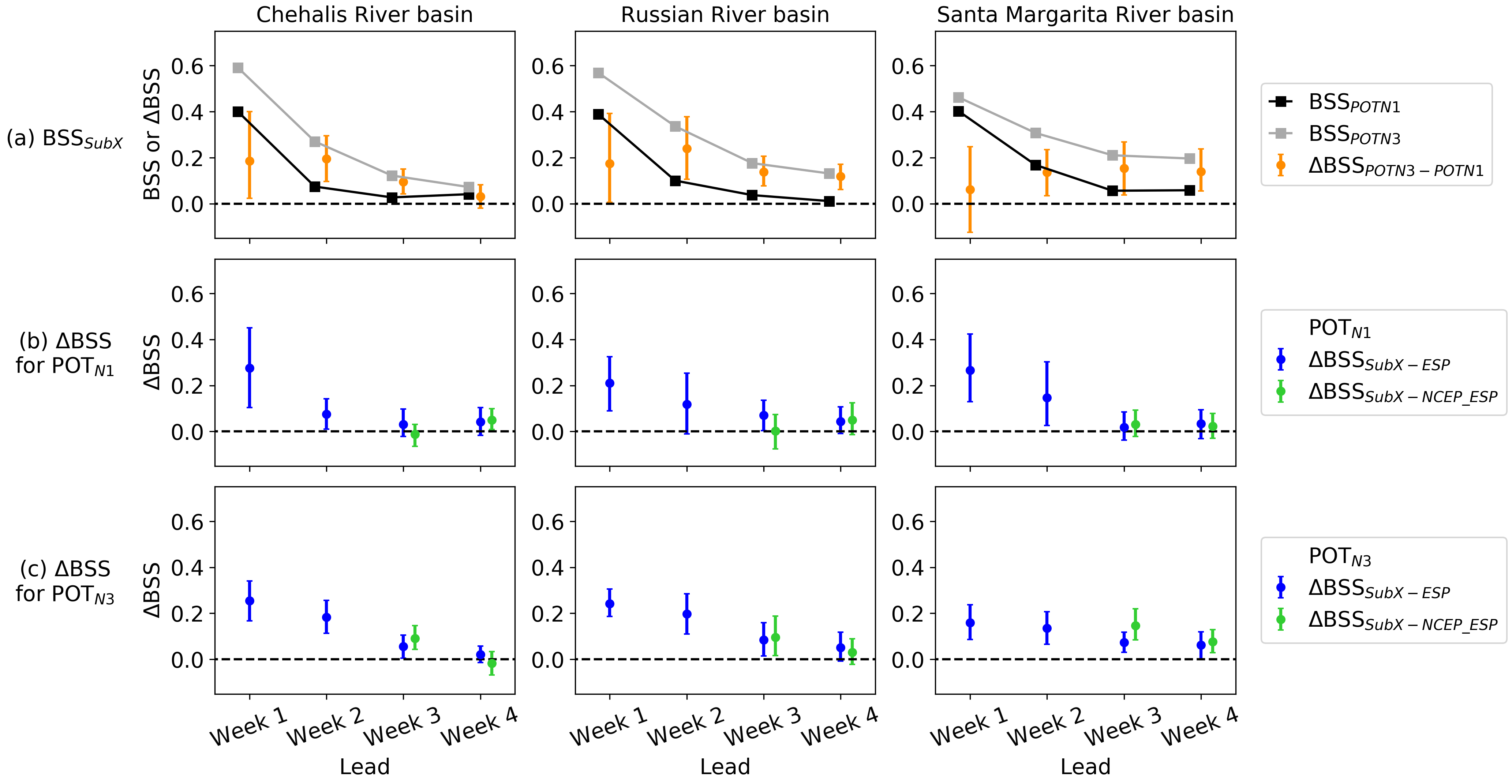 Figure 1: a) SubX-based Brier skill score (BSS; denoted as “BSSSubX” and shown as square symbols) over weeks 1-4 lead time for Peaks Over Threshold of POTN1 (denoted as “BSSPOTN1”) and POTN3 (denoted as “BSSPOTN3”) extreme discharge events (with threshold set to 1 and 3 events per year on average). The boxplot shows a 90% confidence interval of their differences (denoted as “△BSSPOTN3-POTN1”) derived by bootstrapping. The case when there is no overlapping with zero indicates that the difference is significant. b) Difference between the BSSSubX and the ESP-based BSS (denoted as “△BSSSubX-ESP”), and difference between the BSSSubX and the NCEP_ESP (i.e. the NCEP is used for weeks 1-2 and ESP for weeks 3-4) -based BSS (denoted as “△BSSSubX-NCEP_ESP”) for POTN1 events. c) Same as b) but for POTN3 events.