Floods due to atmospheric rivers along the U.S. West Coast: The role of antecedent soil moisture in a warming climate

Graduate student and now UCLA post-doc, Qian Cao, with her advisor, Professor Dennis Lettenmaier and his group, collaborated with CW3E director F. Martin Ralph, and CW3E researchers Alexander Gershunov and Tamara Shulgina on a recently published a paper in the Journal of Hydrometeorology titled “Floods due to atmospheric rivers along the U.S. West Coast: The role of antecedent soil moisture in a warming climate” (Cao et al., 2020). The research aligns with the Monitoring and Projections of Climate Variability and Change Priority Area within CW3E’s 2019-2024 Strategic Plan because it examines atmospheric rivers roles in flooding along the U.S. West Coast.

Precipitation extremes are projected to become more frequent along the U.S. West Coast due to increased atmospheric river (AR) activity, but the frequency of less intense precipitation events may decrease. Antecedent soil moisture (ASM) conditions can have a large impact on flood responses especially if pre-storm precipitation decreases. Taken together with increased antecedent evaporative demand due to warming, this would result in reduced soil moisture at the onset of extreme precipitation events. This article examines the impact of ASM on AR-related floods in a warming climate in three basins that form a transect along the U.S. Pacific Coast: the Chehalis River basin in Washington, the Russian River basin in Northern California, and the Santa Margarita River basin in Southern California (see Figure 1).

They ran the Distributed Hydrology Soil Vegetation Model (DHSVM) over the three river basins using forcings downscaled from 10 Global Climate Models (GCMs). They examined the dynamic role of ASM by comparing the changes in the largest 50, 100 and 150 extreme events in two periods, 1951-2000 and 2050-2099. They used the AR catalogs of Gershunov et al. (2019) in which they applied an automated AR detection scheme to daily GCM output. They found that in the Chehalis (northern-most) basin, the projected fraction of AR-related extreme discharge events slightly decreases. In the Russian basin, this fraction increases, however, and more substantially so in the Santa Margarita basin (see Table 1). This is due to increases in AR-related extreme precipitation events, as well as the fact that the relationship of extreme precipitation to extreme discharge is strengthened by projected increases in year-to-year volatility of annual precipitation in California, which increases the likelihood of concurrent occurrence of large storms and wet ASM conditions.

The research supported herein was funded by the CW3E at the Scripps Institution of Oceanography UC San Diego via AR Program Phase II. Understanding the projected roles of ARs in future flooding is important to building resilience in California. 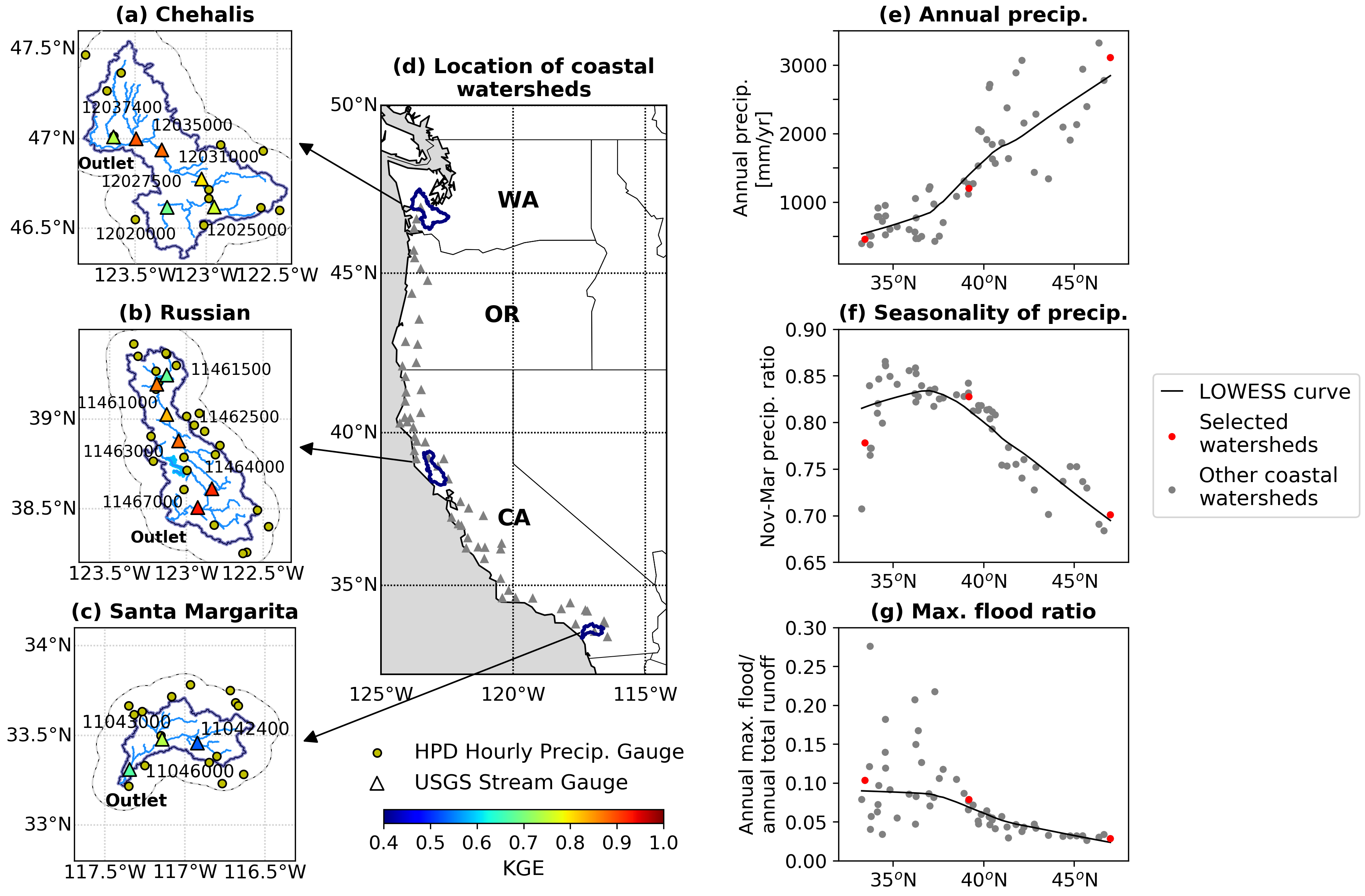 Figure 1. Map of study region including a) the Chehalis River basin in Washington State, b) the Russian River basin in Northern California, and c) the Santa Margarita River basin in Southern California. The Kling-Gupta efficiency (KGE) during the calibration period (1986-2000) is displayed for each stream gauge in a)-c). d) Location of 60 unregulated coastal watersheds and their hydroclimatic conditions, including e) annual precipitation, f) seasonality of precipitation, and g) max flood ratio. The LOWESS (locally weighted scatterplot smoothing) curve is displayed in e)-g).