Researchers from South America, Maximiliano Viale from IANIGLA-CONICET Argentina and Raul Valenzuela and Rene Garreaud from University of Chile, along with CW3E director Marty Ralph, recently published a paper in the Journal of Hydrometeorology titled “Impacts of atmospheric rivers on precipitation over southern South America” (Viale et al. 2018).

This paper quantifies the impact of atmospheric rivers (AR) on precipitation in southern South America. An AR detection algorithm was developed based on integrated water vapor transport (IVT) from six-hourly CFSR reanalysis data over a 16-year period (2001-2016). Along the Pacific (west) coast, AR landfalls are most frequent between 38°S and 50°S, averaging 35-40 days/year. This decreases rapidly to the south and north of this maximum, as well as to the east of the Andes. Landfalling ARs are more frequent in winter/spring (summer/fall) to the north (south) of ~43°S (Fig. 1). 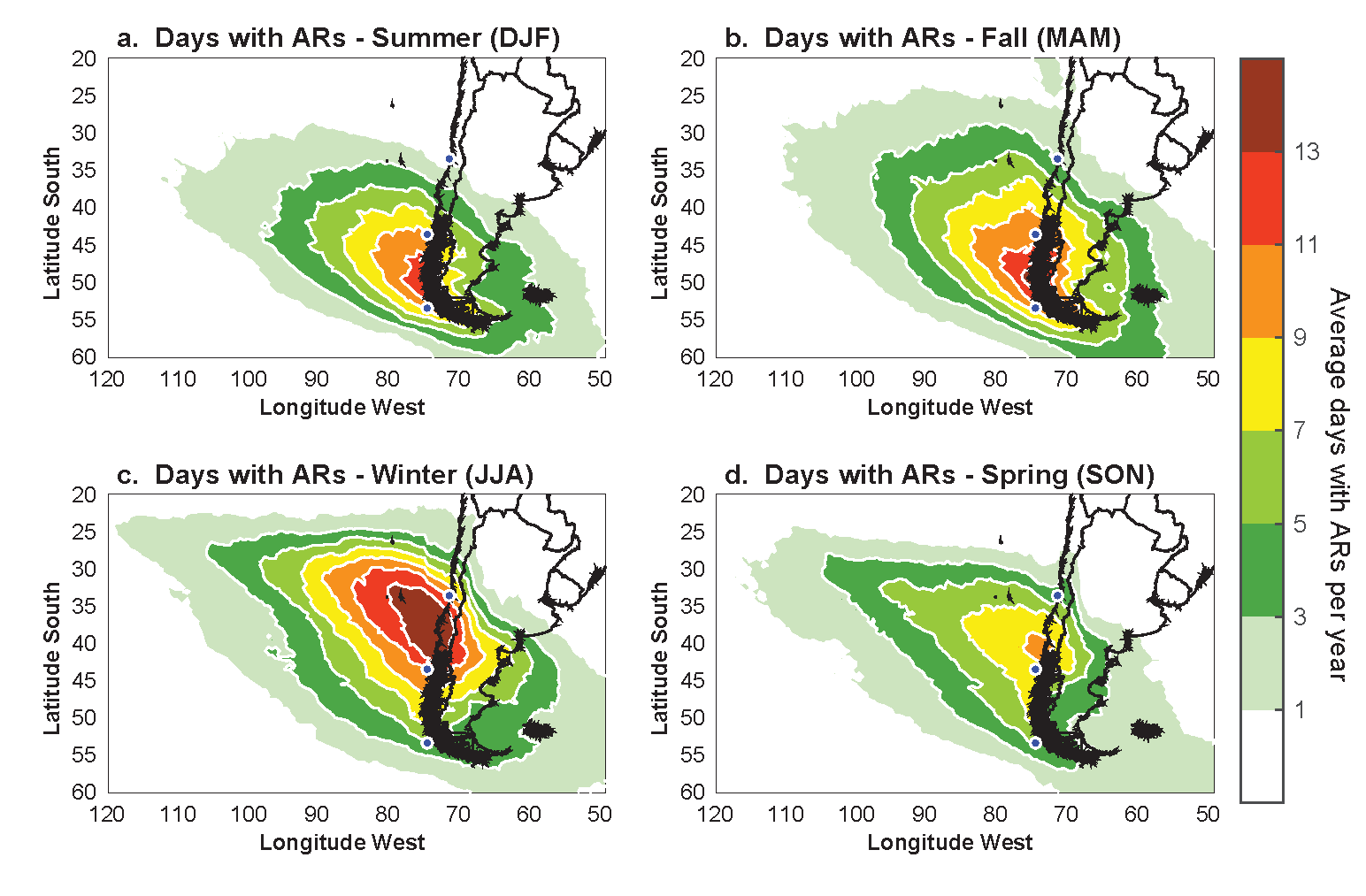 Figure 1: Seasonal frequencies of landfalling ARs on the west coast of South America: a) Summer (DJF), b) Fall (MAM), c) Winter (JJA), d) Spring (SON). Units are expressed in the average number of days with ARs per year. Blue points are plotted on the coast for reference at 33.5ºS (latitude of the Santiago city), 43.5ºS (southern Chiloe Island), and 53.5ºS (latitude of Punta Arenas city).

ARs contribute 45%-60% of the annual precipitation in subtropical Chile (37°S-32°S) and 40%-55% along the midlatitude west coast (37°S-47°S, see Fig. 2). These values significantly exceed those in western North America, likely due to the Andes being taller. In subtropical and midlatitude regions roughly half of all events with top-quartile precipitation rates occur under AR conditions. Median daily and hourly precipitation in ARs are 2-3 times that of other storms. The results of this study extend knowledge of the key roles of ARs on precipitation, weather and climate in the South American region. They enable comparisons with other areas globally, provide context for specific events and support local nowcasting and forecasting. 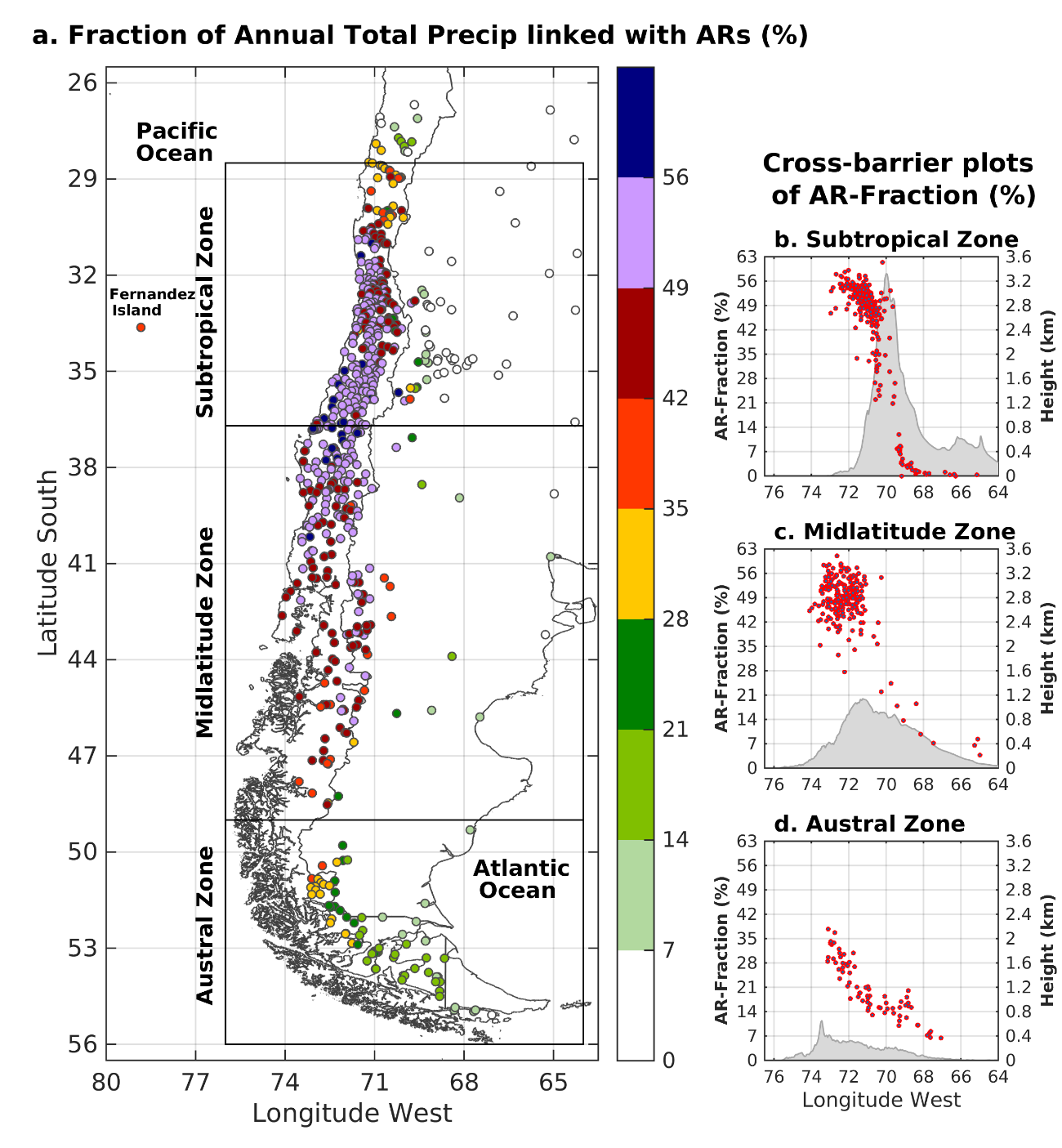 Figure 2: (a) Fraction of annual total precipitation associated with AR conditions over the 2001-2016 period. Fractions are multiplied by 100 to express the results in percentage. AR fractions at each station site are calculated using daily rain dataset. Cross-barrier plots of the AR-Fraction for the (b) Subtropical, (c) Midlatitude, and (d) Austral zones. The limits of each zone are defined in the plan-view plot of the panel (a). The meridionally averaged west-east cross-sections of the topography (within the rectangle shown in panel a) are shown in panels (b)-(d) as a reference.