This study provides the most comprehensive observations to date of a mesoscale frontal wave associated with an atmospheric river, including its structure offshore, landfall characteristics and impacts on precipitation. It utilizes research aircraft, a unique array of coastal hydrometeorological measurements and inland data. This paper reflects the broader scientific collaboration between CW3E and NOAA/PSD, and adds to the knowledge of phenomena that are critical to creating extreme precipitation on the U.S. West Coast – a major thrust of CW3E. Dr. Ralph contributed to this paper by proposing the experiment (Ralph et al. 2016 BAMS), identifying the science objective for the flights (i.e., mapping out the structure of a mesoscale frontal wave with dropsondes and airborne radar), laying out the flight tracks, guiding the mission onboard, having been the PI of the major projects that created the unique land-based observing network (NOAA HMT- Ralph et al. 2013 BAMS, and the DWR-sponsored EFREP mesonet – White et al. 2013 JTech) used in the study and contributing to the analysis and interpretation of the measurements in this paper.

The wettest period during the CalWater-2014 winter field campaign occurred with a long-lived, intense atmospheric river (AR) that impacted California on 7–10 February. The AR was maintained in conjunction with the development and propagation of three successive mesoscale frontal waves. Based on Lagrangian trajectory analysis, moist air of tropical origin was tapped by the AR and was subsequently transported into California. Widespread heavy precipitation (200–400 mm) fell across the coastal mountain ranges northwest of San Francisco and across the northern Sierra Nevada, although only modest flooding ensued due to anomalously dry antecedent conditions. A NOAA G-IV aircraft flew through two of the frontal waves in the AR environment offshore during a ;24-h period. Parallel dropsonde curtains documented key three dimensional thermodynamic and kinematic characteristics across the AR and the frontal waves prior to landfall. The AR characteristics varied, depending on the location of the cross section through the frontal waves. A newly implemented tail-mounted Doppler radar on the G-IV simultaneously captured coherent precipitation features. Along the coast, a 449-MHz wind profiler and collocated global positioning system (GPS) receiver documented prolonged AR conditions linked to the propagation of the three frontal waves and highlighted the orographic character of the coastal-mountain rainfall with the waves’ landfall. Avertically pointing S-PROF radar in the coastal mountains provided detailed information on the bulk microphysical characteristics of the rainfall. Farther inland, a pair of 915-MHz wind profilers and GPS receivers quantified the orographic precipitation forcing as the AR ascended the Sierra Nevada, and as the terrain-induced Sierra barrier jet ascended the northern terminus of California’s Central Valley. 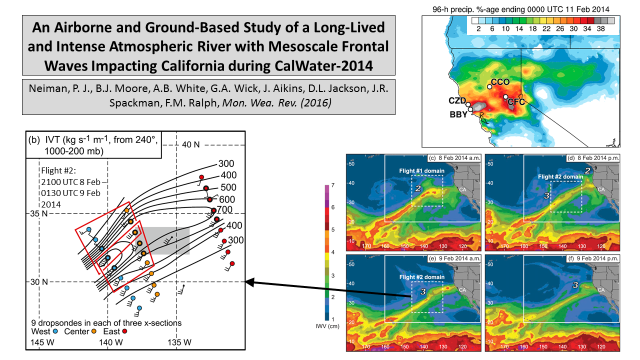