March is over (and the precipitation totals are in), so here is the update to the historical odds of getting to normal (and other fractions of normal) precipitation this year. Notice that the odds from the March 1 situation (in parens; click here for March report) are included alongside the April 1 odds, so that you can see whether March wetness made much difference. In fact, the odds haven’t changed too much in most areas because, although March was wettish (except down south), those additions were balanced in these April odds by the fact that we have almost run out of time this year to get much more precipitation.

Bottom lines (both of which you probably already know): We’re not going to fill the precipitation deficits we accumulated over the past 5 years with this year’s precipitation (except, long-odds, maybe in eastern NV). In southern California, the precipitation situation is especially grim and even the odds of making it to 75% of normal this year are well less than even. 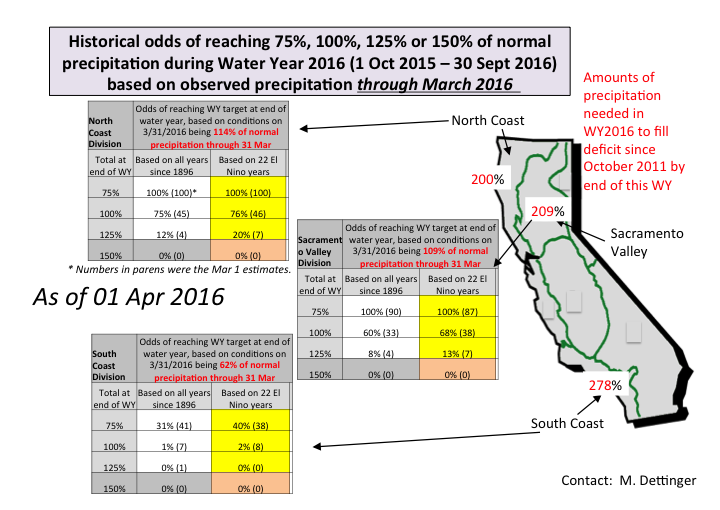 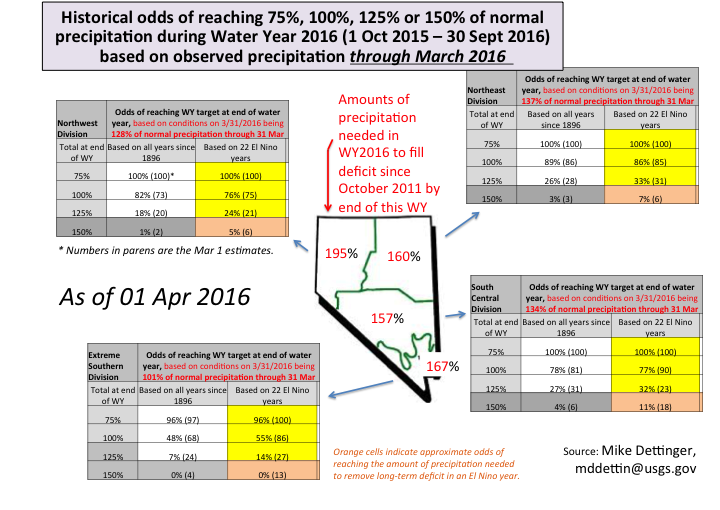 To arrive at the probabilities shown, the precipitation totals for the remaining months of the water year were tabulated (for all years, for only El Ninos, or for only La Ninas) and the number of years in which that precipitation total equaled or exceeded the amount still needed to reach normal were counted. The fraction of years that at least reached that threshold is the probability estimate. This simple calculation was performed for a full range of possible starting months (from November thru September) and for a wide range of initial (year-to-date) precipitation conditions. The calculation was also made for the probabilities of reaching 75% of normal by end of water year, 125%, and 150%, to ensure that the resulting tables of probabilities cover almost the full range of situations that will come up in the future. Contact mddettin@usgs.gov for more information.