The Center for Western Weather and Water Extremes (CW3E) at Scripps Institution of Oceanography runs a weather prediction system called ‘West-WRF’ that has been optimized for predicting rainfall along the West Coast primarily from atmospheric rivers (AR). Forecast data from West-WRF is used by water managers to improve reservoir operations and to inform CW3E AR reconnaissance activities.

The West-WRF forecast season kicked off on 1 October for water year (WY) 2023 with several new additions and enhancements. Starting the West-WRF forecast season in October is two months earlier than the previous year and is motivated by a collaboration with San Diego Gas and Electric (SDG&E) to capture more of the Southern California fire weather season. The WY2023 West-WRF weather prediction system consists of four sets of unique daily forecasts that are run on the Comet high-performance supercomputer that is managed by the San Diego Supercomputer Center (SDSC).

Three deterministic West-WRF forecasts are run daily during the WY2023 season. Two of the deterministic forecasts are initialized with GFS and ECMWF initial conditions and run with 100 vertical levels on three numerical grids at 9, 3, and 1 km horizontal grid spacing (as shown in Figure 1). For this West-WRF season, the outermost 9 km numerical grid was extended roughly 700 km to the east to include the Rocky Mountains so that the potential impact of ‘Backdoor Slider’ storm systems on Southern California is better predicted. Also, the 9 km grid was extended around 1200 to the west to provide additional information for CW3E’s AR reconnaissance program. The 1 km grid spacing West-WRF domain covering portions of Northern California is new for this forecast season and is motivated by improving precipitation estimates in complex topography. Running an additional model domain this season was possible due to optimizations of the West-WRF model executable on Comet, which reduced forecast run times by around 15%.

In addition to the deterministic forecast runs, the CW3E West-WRF system runs a 200-member forecast ensemble initialized daily at 00 UTC. The West-WRF ensemble provides a probabilistic weather forecast by varying initial conditions, model physics, and applying a stochastic (i.e., a random probability distribution) perturbation to represent model error. As a result, a suite of physically plausible forecast scenarios are generated by the ensemble, which is particularly advantageous for identifying potential extreme weather events. The West-WRF ensemble has a forecast lead time of 7 days and is run with 60 vertical levels on a single 9 km grid horizontal spacing domain, consistent with the deterministic runs. An example West-WRF ensemble forecast product showing the probability of 24-hr total rainfall exceeding 1 inch over California is shown in Figure 2. The example product highlights the value of the West-WRF ensemble due to its ability to communicate forecast confidence. 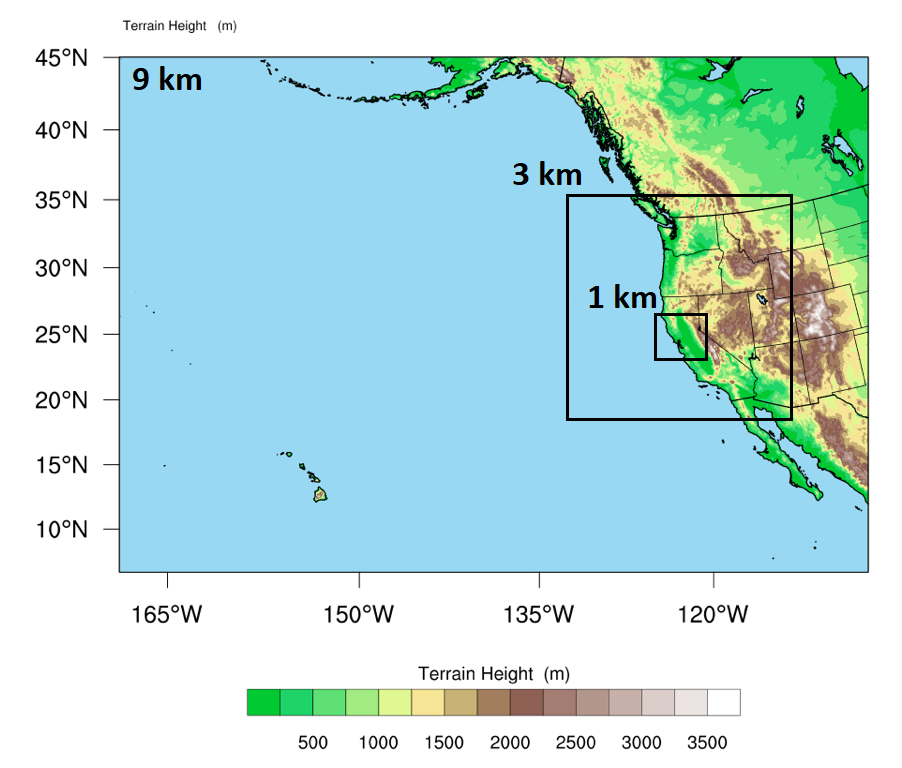 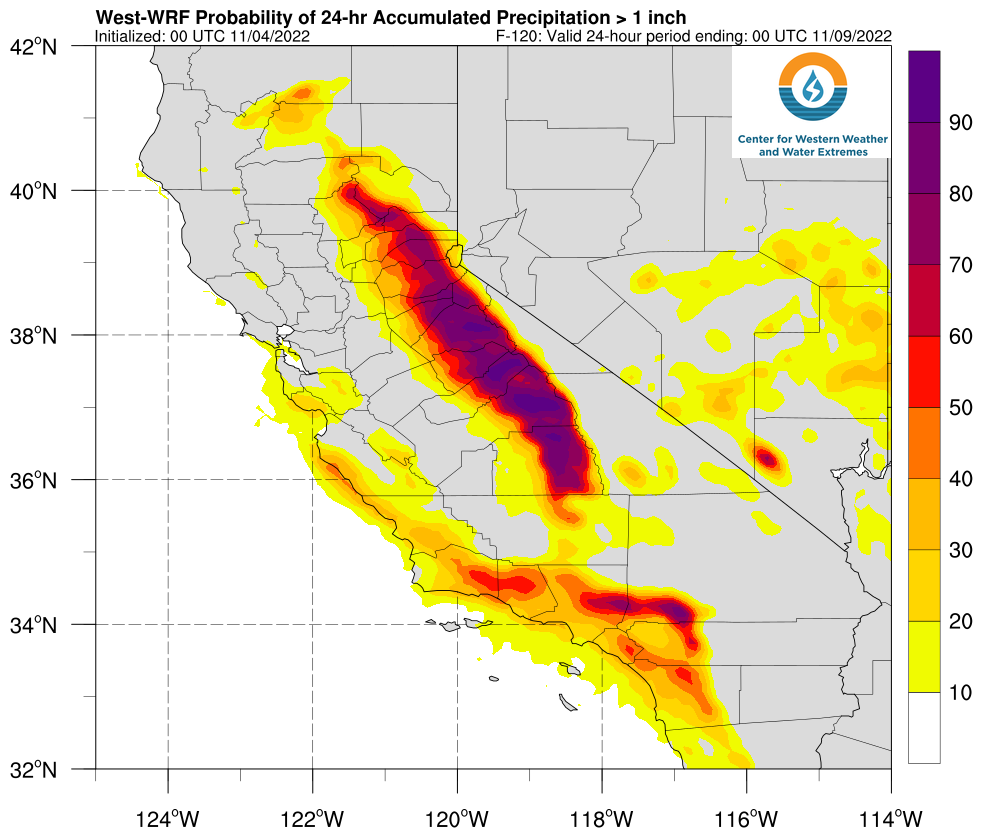 This work used the Comet supercomputer, which was made available by the Atmospheric River Program Phase 2 and 3 supported by the California Department of Water Resources and the Forecast Informed Reservoir Operations Program supported by the U.S. Army Corps of Engineers Engineer Research and Development Center.

CW3E thanks the AR Program, USACE, and San Diego Gas and Electric for support in running the WY2023 West-WRF system and configuration enhancements.

Inquiries should be directed to Daniel Steinhoff, Matthew Simpson, or Luca Delle Monache.